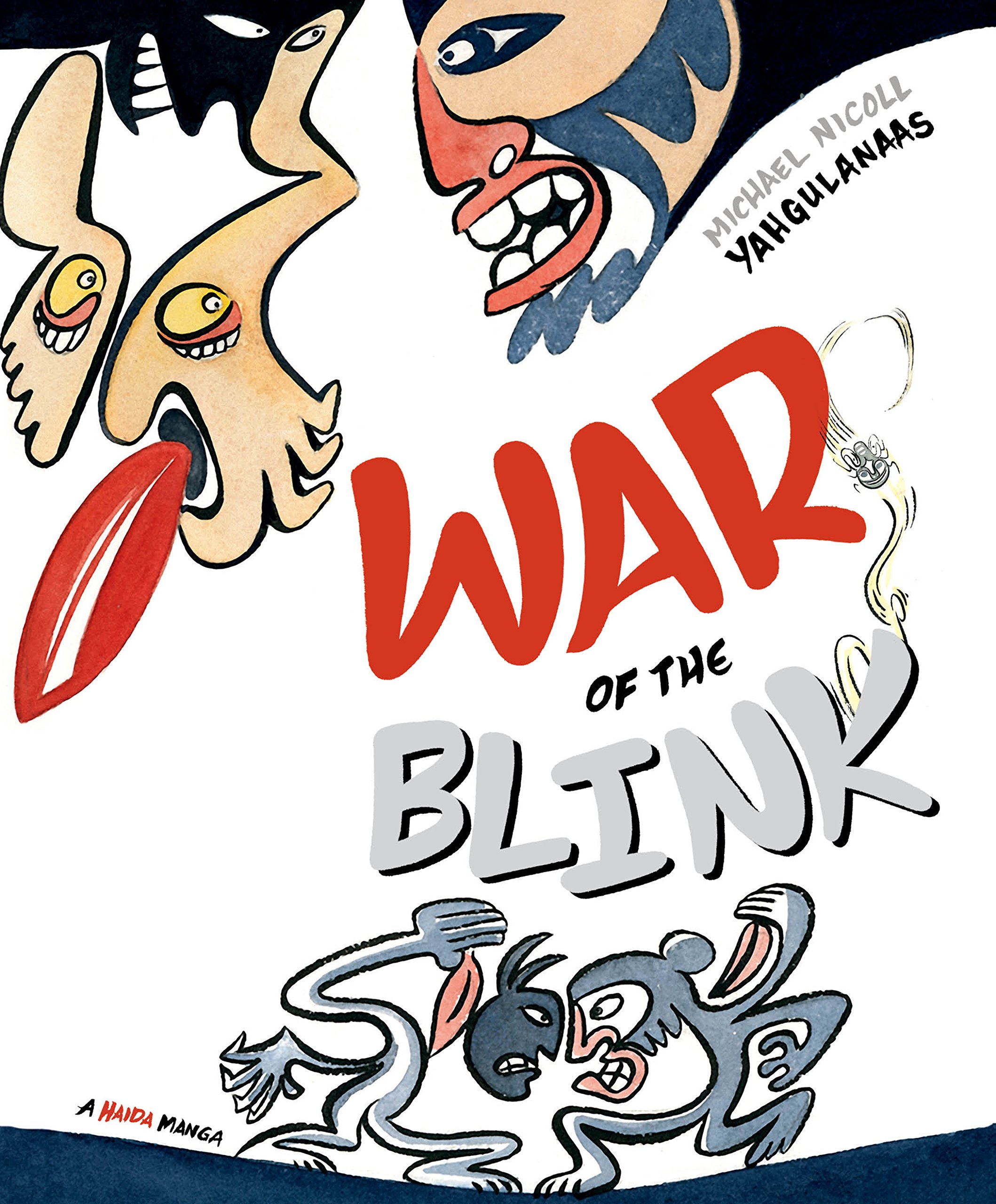 War of the Blink

The thing is, the main protagonist in Michael Nicoll Yahgulanaas’ War of the Blink is actually the tertiary character, the witnessing fly. Completed in 2017, the key themes and their presentation in “War of the Blink” are timeless and mutable. As with Yahgulanaas’ other books, the story opens with the familiar phrase, “once upon a time this was a true story…” Initially the story appears immediately comprehensible: two nations at war, the one approaching stealthily by canoe in the hopes of startling and overtaking their neighbours along the west coast islands of xhaaydla gwaayaay. But the seemingly insignificant fly is of central importance. A being so minute in size, it nonetheless becomes a harbinger of danger, ultimately serving as a kind of interspecies referee and peacemaker between the visitors and the home team. This inhuman presence distracts away from the inhumanity of the events that would otherwise transpire, transforming conflict into play, enmity into camaraderie — so much so that declarations of victory or defeat are rendered meaningless.

In Yahguhlanaas’ presentation of this age-old Haida story, the reader is encouraged to revisit the pages of War of the Blink from multiple points of view. The first page is not a definitive starting point but merely a nudge, a suggestion. If the reader is to take the position of the fly rather than that of the warring humans, the importance of page and narrative order lessens just as the depths of the message and the medium increase. The book binding becomes a temporary casing, a carapace that is not meant to encapsulate the revelation of potential meanings. Through its non-pagination and the final presentation of the two-dimensional totem pole, which follows from notes about the author, Yahgulanaas prompts the reader to tear out each leaf, so that it may be repositioned in a performative reconstruction of the mosaic image. From this reconfigured perspective, War of the Blink challenges different cultural conventions of reading and storytelling. The social mores to not tear out pages from a book or to perambulate the stationary totem pole exist within human realms of acceptability, whereas Yahgulanaas’ two-dimensional totem pole reveals that the human story itself is framed within the fly’s form. And in the upper right-hand corner, a smaller fly hovers or eats into the image, indicating that human and nonhuman are co-participants in a house of mirrors with regard to witnessing whilst being witnessed. Furthermore, if one were to tape the pages together, make a single origami central vertical fold, and cup the paper into a V-shape, the simultaneous and parallel formations of human conflicts and their resolutions become identifiable in three dimensions. Finally, if one were so inclined to repeatedly flap both sides of the paper, much like the fluttering of an insect in flight, the message in the fourth dimension shifts again to imply that warfare requires a repetition of similarly antagonistic and directionally oppositional movements in order to create a state of affairs that would cause existential harm to humans and nonhumans alike. Reciprocally, de-escalation of potential human conflict may necessitate similarly gracious multidirectional movements in order to establish societal relations that would be of planetary benefit.

In Michael Nicoll Yahgulanaas: The Seriousness of Play, Nicola Levell offers important insights into Yahgulanaas’ artistic pedigree, political career, and environmental activism. Levell approaches Yahgulanaas’ body of work from anthropological and museological perspectives steeped within Euro-western philosophical and artistic traditions to discuss the artist’s carving genealogy and apprenticeship with Robert Davidson, his years serving as Chief Councillor of the Old Massett Village Council, and early examples of his art and street activism to protect Haida Gwaii from resource extraction and pollution. Written primarily for a North American and Canadian art readership, The Seriousness of Play adeptly articulates Yahgulanaas’ profound capacity to address cultural, artistic, and political taboos and conventions with a keen sense of playfulness. Levell also attempts to address Yahgulanaas’ interest and study in Chinese and Japanese art practices such as calligraphy and ukiyo-e print-making. Overall, Levell’s retrospective approach to contemplating Yahgulanaas’ artistic career is useful as one of several possible entry points into engaging with the breadth and contents of the artist’s multidisciplinary practice. However beneficial Levell’s book is in establishing the significant contributions that Yahgulanaas has made in the Canadian and Indigenous art worlds, it unwittingly creates a cultural chasm between the artistic affiliations and exchanges long evident in communities that exist along the Pacific and which have been presented brilliantly in the world of Haida manga.

Through Haida manga, Yahgulanaas traverses not only nation-based and Eurocentric artworlds but exceeds too the boundaries between tangible and intangible culture, human and non-human relations. The uncanny resemblances in subject matter and form between Yahgulanaas’ Haida manga and manga produced along the West Pacific region point to longstanding cultural exchanges which call for further research. The imagery in War of the Blink evokes the hybridization of Hokusai’s art in the period when he was known as Taito and his last period when he referred to himself as Gakyō Rōjin Manji (Old man mad about art). Hokusai, who had moved 90 times and changed his name over 30 times during his life, cannot be easily reduced to providing a singular artistic contribution, given that each name change was accompanied by equally distinct artistic explorations. In the fusion of those two named periods, Hokusai’s artworks meld together the practice of manga (漫画) which transliterates into “unrestrained art”, with the investigation of spiritual and otherworldly existence. Likewise, in War of the Blink, with the presence of the shaman and the “strange fly”, Yahguhlanaas brings forward for deep consideration the agency and reciprocal respond-abilities that exist in human and non-human interactions, a bioculturalism comprised of kinship relations that transcend human-made creative and cultural regulation. Beyond the Pacific regionalism for appreciating the artistry of War of the Blink, the eternal message is of global import. In the era of the Covid-19 pandemic, this Haida manga becomes a parable of what has passed and what is yet to come. Epistemically uncontainable and bursting with play, War of the Blink is truly worthy of multiple visitations, human and otherwise.