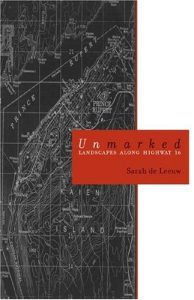 In 1982 SARAH DE LEEUW’S father put on a suit and tie – “a rare sight,” (1) de Leeuw writes – and then left for the airport. He returned on the evening of the third day to tell his family that he had at last found a job. The journey to this new job would take the family away from Duncan, beyond Prince George and Burns Lake, beyond Terrace and Prince Rupert, across the Hecate Strait to Port Clements. For eight-year-old de Leeuw, this journey, “three days travel and two nights sleep away from the people I have left behind,” (9) is a journey to a place on the edge of nothingness.

Unmarked: Landscapes along Highway 16 is de Leeuw’s account of her life on that edge of nothingness and her journey back along Highway 16, through Juskatla, Kitimat, Kitwanga, Rosswood, the Nass Valley, through childhood and young adulthood. Each of the sixteen chapters is a beautifully crafted essay, loosely connected with the others but able to stand alone, on the complexities and sadness – there is little happiness in this book – of life in the settlements through which de Leeuw’s journey pulls her. De Leeuw draws her characters and their sorrow and anger with deft, economical strokes: “They auctioned orfjeskatla, piece by piece … I remember clearly the look of Leaha’s father. Sportsmen Unfiltered cigarette cradled gently between fingers, sitting legs apart, elbows on knees, on the hood of his gold Cadillac. A stunned look of resignation, the same look I had always imagined might flash across a faller’s face the instant he cut into a widow maker, those terrible trees who in such a long split second rip out to take a man down” (20). Writing of her years in Kitimat, she sums up an entire adolescence with just a handful of well-chosen phrases: “The steep corner around the bridge where your brother had his first and last car accident … where you passed, over and over, vowing each time was your last, each time to move away. Far away. Far away from endless Friday nights of bootlegging booze from the manager of the restaurant where you worked, leaving after long shifts, hair thick with the fatty scent of cheese and pizza dough, cheap wine and parents who take their children to the one and only family restaurant, exhaling their cigarette smoke over their kids’ heads and directly into your green and white uniform. Any goddamn place that isn’t here, even if it’s just over there, is far enough for you. It’s away” (48).

But the main presence in Unmarked is the landscape of northern British Columbia, and de Leeuw’s evocation of that landscape is the greatest achievement in this wonderful book. Whether she is describing “the Zoo” at Cranberry Junction or the hills that surround Prince George or the beaches of Tlell, de Leeuw writes with a compassion and insight that reveal an extraordinary and subtle talent. She served recently as the research coordinator for the University of Northern British Columbia’s task force on the effects of substance abuse on children, and is currently working on a PhD in cultural geography at Queen’s University. The question that must be asked is whether she will continue to write creative nonfiction. Unmarked: Landscapes along Highway 16 is a remarkable book, and to sustain its momentum in future writings will be a challenge. There is no reason to think that de Leeuw cannot meet that challenge, but even if she never writes another word of creative nonfiction, she has already produced an outstanding testament to lives lived in northern British Columbia.