Unfree Labour?: Struggles of Migrant and Immigrant Workers in Canada

By Aziz Choudry and Adrian A. Smith, Editors 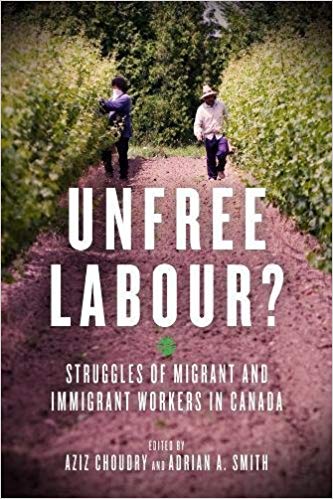 Canada has a long history of reliance on the labour of both permanent immigrants and migrant workers. In recent decades, the number of migrant workers entering Canada has increased significantly relative to permanent immigrants. A core component of Canada’s policy on migrant labour is to restrict the labour mobility of migrant workers; in many cases, they are only permitted to work for the employer who has obtained permission to hire them, and only in the specific job for which they were hired. Many migrant workers thus cannot circulate freely in the labour market as permanent residents and Canadian citizens can, which leads to a heightened power differential between migrant workers and their employers. These workers’ vulnerability to abuse and exploitation at worksites is well-documented, as is their social and economic marginalization. Drawing on the Marxist concept of unfree labour, the collection in Unfree Labour offers analytical and practical responses to the subordination of immigrant and migrant workers in Canada in the context of domestic and globalized neoliberal policy. As a whole, the work acknowledges structural causes of these workers’ subordination and emphasizes local sites of organization and resistance and their potential for material change in workers’ conditions. The volume’s contributors are scholars and/or frontline activists. The collection emphasizes migrant workers, rather than immigrant workers, but many analytical components are applicable to immigrant workers as well; some, such as Polanco’s chapter on fast food work, touch directly on the interests of immigrant workers.

Most of the essays in Unfree Labour consider specific labour segments in which migrant labour is prevalent. Mark Thomas demonstrates the role of the state in reproducing modern forms of unfree labour through the example of Canada’s Seasonal Agricultural Worker program. Adriana Paz Ramirez and Jennifer Jihye Chun provide a historical perspective on migrant farmworker organizing and emphasize the need to call out migrant farmworker programs as a form of racial apartheid and to consider multi-faceted organizing approaches. Chris Ramsaroop critiques Canada’s failure to provide Employment Insurance benefits to migrant farmworkers, and takes issue with organized labour’s advocacy in this area, arguing that transnationalism provides an alternative frame for the distribution of benefits. In the context of domestic workers, Jah-Hon Koo and Jill Hanley draw on empirical work to document workers’ resistance strategies and to implicate the state’s requirement of private sphere worksites as a barrier to effective labour organizing. Geraldina Polanco considers the use of migrant labour in fast food services, drawing on fieldwork to highlight the devaluing impact of foreign work programs on vulnerable domestic workers and emphasizing the need to organize domestic and migrant workers alongside each other.

The remaining chapters deal with grassroots and policy responses to migrant worker struggles. Calugay, Malhaire, and Shragge emphasize the importance of understanding structural factors in workers’ countries of origin as well as developing trusting relationships and organizing across ethno-cultural lines. Calugay, et al., elaborate on the material and political challenges of organizing workers and the importance of organizing across cultural communities, building relationships, and utilizing both legal and extralegal strategies. In terms of more policy-based responses, Abigail Bakan offers a critique of federal employment equity law based on its ineffectiveness in dealing with embedded forms of systemic discrimination such as those inherent in the live-in caregiver program. Sedef Arat-Koç situates Canada’s foreign work programs in the context of neoliberal policy and labour market restructuring, framing the migrant work program not only as a source of cheap labour, but as a subsidy for Canada’s welfare state. She argues that to respond meaningfully to migrant workers’ struggles, it is necessary to overcome romanticized nationalist narratives and make oppositional politics more explicit. Two chapters (Paz Ramirez and Chun, and Polanco) draw on fieldwork and organizing experience with migrant worker groups in British Columbia, specifically with regard to the agriculture and fast food industries. As a whole, this collection addresses the impact of national policy and organizing methods, which bear directly on the situation of migrant workers in British Columbia, whose labour market engagement and barriers to equality are closely analogous to those evident in Ontario and Quebec (the focus of several chapters).

This collection is significant in its contribution to labour migration studies. It includes multiple empirical pieces in which critiques of law and policy draw directly on interviews with migrant workers. It also contributes theoretically, elucidating critical relationships between Canada’s labour migration policies and transnational relations, considering the potential of grassroots organizing, and problematizing the relationship between migrant workers’ struggles and the “traditional” (white, union-based) labour movement, particularly in terms of its failure to adequately contest racism.  Its greatest strength, however, lies in the grounding of its analysis in the insights of organizers and activist-scholars directly involved with the material struggles of migrant workers. This work will be of interest to advocates, scholars, and activists involved with migrant workers. It will also appeal to those interested in critical perspectives on labour in the new economy, and to anyone who wishes to consider strategies to resist the subordination of migrant workers in Canada.