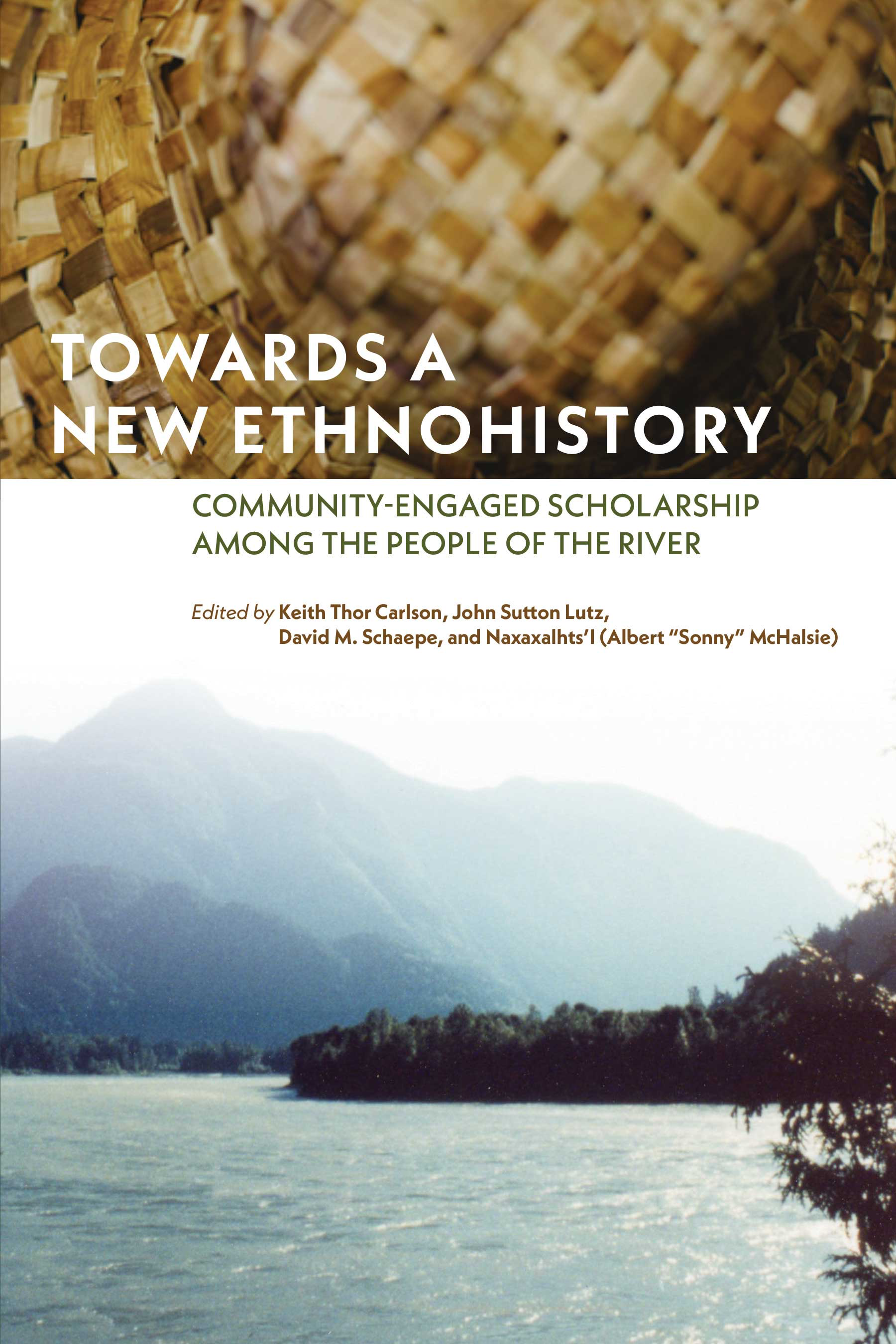 Towards a New Ethnohistory: Community-Engaged Scholarship Among the People of the River

Review By Alan B. Anderson

This book purports to represent a ‘New Ethnohistory’ as community-engaged research in First Nations communities. It consists primarily of essays written by graduate students who participated in the Ethnohistory Field School run since 1997 by the Universities of Saskatchewan and Victoria among the Stó:lōcommunities of the Fraser Valley. These selected essays focus on a broad variety of topics suggested by the Stó:lō. Altogether, these diverse topics provide a unique insight into an Indigenous Stó:lō understanding of their history, traditions, stories, and not the least relations with the all-encompassing settler world.

But what, exactly, is the ‘New Ethnohistory’? According to the editors, “Indigenous participation, creation, permission, and direction in research on Indigenous communities, is one of the main manifestations of the New Ethnohistory”, which “incorporates the study of Indigenous historical consciousness –  how Indigenous people in the past thought about and understood their history as it has  changed over time when each generation acquired information and insight that could be used to complement (and sometimes supplement and even revise) the understandings of their ancestors” (20-22). Moreover, “coming to understand the intricacies of how colonialism was deployed and the implications of this deployment for Indigenous people is accomplished more readily through the application of decolonizing methodologies such as those that are central to the New Ethnohistory” (23). Yet the editors explain that “there is no particular methodology characterizing the New Ethnohistory; rather there are a series of complementary approaches that together can be used to make a break with the past and lay a foundation for new directions in the field” (20). In emphasizing community engagement, the editors comment that “the New Ethnohistory recognizes that to qualify as truly community-engaged, scholarship must be not only of benefit for communities…. but it must also be genuinely collaborative and cooperative” (26).

However, this ‘ethnohistorical’ approach does not seem particularly novel. The editors succinctly review how ethnohistory relates to other very similar approaches – even earlier ethnography and anthropology, which they refer to as the ‘Old Ethnohistory’, although ethnography and anthropology have been changing markedly. Other methodological approaches could include inter/trans-disciplinary community-based research, community-engaged scholarship and community-university partnerships (which they do briefly acknowledge). Clearly what is conceived as the ‘New Ethnohistory’ pertains closely to revisionism in Indigenous research and scholarship, to Indigenous knowledge, First Nation-settler relations, post-colonial literature on settler colonialism, decolonization, post-colonial scholarship and critical theory. The editors provide an extensive discussion of Indigenous methodologies in the Introduction. In his earlier book, The Power of Place, the Problem of Time: Aboriginal Identity and Historical Consciousness in the Cauldron of Colonialism (University of Toronto Press, 2010), Carlson has emphasized the importance of ethnohistorical research methodology that challenges the metanarrative that is common in historical writing, where the impact of colonialism on Indigenous people is interpreted from within the colonial framework.

In contemporary community-based research with Indigenous communities, typically the research agenda is suggested by Indigenous participants or collaborators; Indigenous organizations and communities collaborate with academic researchers in project governance, direction, approval, feedback, and cultural appropriateness; and research results are given to the community being studied. Many, most or all reports on particular component projects may be written by Indigenous academics/researchers; moreover Indigenous students may be involved in all aspects of the research processes. So it is surprising, perhaps, to find so few Indigenous authors in a book purporting to represent the ‘New Ethnohistory’.  Naxaxalhts’i/Albert ‘Sonny’ McHalsie, one of the four editors, wrote a short Prologue, while Adam Gaudry, a Native Studies professor at the University of Alberta, has authoreda challenging Epilogue: “Next Steps in Indigenous Community-engaged Research: Supporting Research Self-sufficiency in Indigenous Communities”. The graduate students who wrote the essays were acting as interpreters of information and stories provided by Stó:lō. How, then, does this differ from non-Indigenous interviews of Indigenous respondents, other than the research agenda being suggested by the Stó:lō?

In sum, despite these reservations, these essays and especially the editors’ Introduction and the Epilogue commendably succeed in exemplifying the ‘New Ethnohistory’, which intends to add a redefined historical approach to community-engaged research. Apart from contributing substantially to Stó:lōnarrative, the editors’ advocation and exemplification of this ‘New Ethnohistory’ should interest and influence academics and students in relevant fields as well as Indigenous and non-Indigenous readers committed to a decolonized approach.