Time Travel: Tourism and the Rise of the Living History Museum in Mid-Twentieth-Century Canada 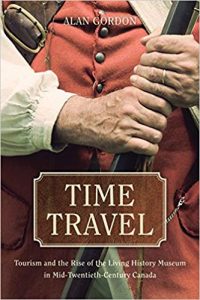 We all remember them. I know that I do. Having spent a summer in my youth washing dishes at Fort Steele heritage town, I remember the wooden boardwalks, the ramshackle buildings, the yellow school buses in the dusty parking lot and the peculiar mash up of accents put on by the hired actors that populated the living history museum (Was it Irish? Texish? Cowboy-Cockney?). I remember the pioneer dresses, the sizzle of red horseshoes dipped in black water and the vacant stare from the dull dead eyes of a wax mannequin. Whatever it was, that place cast an unsettling feeling on me all summer, a feeling that still lingers in my memory. Whether it was the ghosts of the dead or the immense emptiness of the site when the tourists went home, Fort Steele had a darkness to it, a story like a long shadow that stretched through the artificial streets.

In Time Travel, Alan Gordon makes a good attempt to tell some of that story.

Throughout the mid to late twentieth century, living history museums became popular and potent places to experience the past, influencing our interactions with history. They are fascinating sites to explore the historical dissonance so often created by the retelling of colonial narratives. As Gordon often points out, these sites presented a complicated version of history; one equally influenced by anti-modernism, the popularization of settler narratives and the demands pressed upon them to function as tourist attractions, providing as much entertainment value as they provided knowledge of the past. These sites often embarked on an ill-fated quest to reach the mythical island of “authenticity,” constantly striving to experience the unadulterated truth of history by physically situating the historical sojourner in a reconstruction of the past, travelling through a fixed space that served as a material expression of time.

These historical recreations were wildly subjective, their authentic destinations often missed by miles, if ever navigable to begin with. At best, the ways that living history museums achieved authenticity was the way in which they became historical artifacts themselves—expressions of the social and political values at play in post war Canada. As Gordon succinctly notes, living history promoters, “constructed an interpretation of the past that confirmed their influences and idealized version of history.”

Well researched and thorough, this book is an important foray into the study of living history museums in Canada, identifying many interesting themes throughout the main sections of the book.

First, like any good historian, Gordon explores the origins of the museum itself. Intertwined with the rise of natural history collections was the increasing importance of the link between knowledge and artifact, the ways material mediums entrenched themselves in understanding the past.  Through anthropological collections, wax museums, taxidermy exhibits and curio shops, artifact and object became the central means in which to communicate ideas about the world throughout Europe and colonial North America.

It is important to note that these objects were presented to the public as a means to entertain as much as to educate. In these early years, the line between science and entertainment often blurred, as scientific collections competed with independent displays of cabinets and curiosities. As natural history museums gained legitimacy and the groundwork was being laid for institutions such as the Smithsonian, entertainers like PT Barnum travelled the country displaying his “freak shows.” Starkly different undertakings, these two practices were cousins of a sort, and in some cases, institutions oscillated between both worlds. The Cincinnati Western Museum (who had employed James Audubon), gradually transformed from a scientific institution with a comprehensive display of taxidermy birds, into a grotesque collection of wax mannequins replicating Dante’s inferno in an exhibit entitled, “Journey into Hell.” This was the “nineteenth century compromise,” Gordon points out, the uneasy marriage of science and entertainment that was present at the birth of the western museum and remained a constant duality that shaped the living history phenomenon almost a century later, embodying a marriage of object, voyeur and the acquisition of knowledge (32/33).

As important as knowledge and representational materialism became, the narratives that were imbued into them are even more significant. The first incarnations of living history museums in Canada, manifested primarily as “pioneer villages,” constructed sites that embodied a renewed interest in pioneer mythology. As Gordon points out, this mythology was infused with a kind of anti-modernity, ripe with the romance of log cabins and the industrious pioneers who tended the homestead. These idealized narratives were selective, ignoring the dispossession of Indigenous peoples and the destruction of nature that accompanied the first pioneers. Nevertheless, this mythology served as an antidote to the insecurities of urban living and industrial modernization. Of course, no one was moving en masse to the bush, trading in furs or living a life without electricity. Summer camps, national parks and living history museums would suffice, serving as connections to an imagined national past. As Gordon notes, these material expressions of the pioneer myth represented an effort, “to recapture the authenticity of human experience without surrendering the benefits of technological and material progress.”

Gordon attempts to connect all of this with Canadian cultural developments in the ’60s and ‘70s. He includes one chapter on the depictions of First Nations, illustrating the obvious use of “noble savage” stereotypes and their relegation to a backdrop as settler histories took center stage throughout pioneer villages across Canada. Though he points out that many First Nations have continually taken steps to produce their own performative histories, citations from First Nations community leaders, authors or historians would have been helpful here in order to provide this chapter with more depth and dare I say it…authenticity. Gordon does manage to point out how settler mythology served to further exclude Indigenous peoples from living history exhibits and a broader Canadian historical narrative.

Gordon’s gaze eventually turns to British Columbia and the place in which I formed my own visceral connection to this material. Here, he illustrates how the theatre of authenticity is performed as history, personified in Col. Sam Steele—of whom Fort Steele had been named. Settler narratives claim that he came to bring “peace and order” to the Kootenays, and this regional mythology was amplified in the re-creation of Fort Steele. Steele was lionized as the typical settler archetype—tough, fearless, just, stoic. His son helped contribute to this mythology, as did many BC historians. Even Hollywood made its own contribution. The result was a site that celebrated a settlement that barely existed for two decades, represented in its replication as a vibrant community, a valuable link to an authentic past and regional identity.

This settler narrative obscures the context of Steele’s presence in the region. Namely, the forced dispossession of the Ktunaxa First Nation and a continuation of his duties in the North West Rebellion as an enforcer of dispossession and a queller of Indigenous uprisings. In truth, the town became historically significant, and wasn’t swallowed up by the forest like so many other failed boomtowns, because it had become a military outpost, created to house Steele and seventy five armed men who were there for the sole purpose of imposing smaller reserves, undermining the authority of the late Ktunaxa Chief Isadore and taking the most desirable land and handing it over to colonial elites like Colonel James Baker. All of this, of course, was never mentioned in the exhibit. No actor portrayed Sam Steele and his militia, walking through the grounds, telling the Ktunaxa to give up the land, as tourists looked on licking ice cream. At the time I worked there, the Ktunaxa were also absent from the grounds, illustrating the selective way curators chose to remember history. Fort Steele is a clear example how living history museums can physically manifest colonial dissonance, a palimpsest of conflicting narratives—one of progress and settlement, the other of occupation and dispossession. Perhaps living history museums can be a place to physically experience that fundamental dissonance, the tension roiling beneath the theatrical surface of costumes, displays and material performance, immersed in an environment of contradictory history under the hot East Kootenay sun.

Although a bit dry and often Ontario-centric, Gordon pulls together a staggering amount of materials to provide a compelling glimpse into the history of living history. He illustrates the contradictions that abound—the tensions between scholarship and entertainment; between National and multicultural remembrance; between the colliding narratives of settler and Indigenous histories. There is more to be written on this story, and Gordon has made a significant contribution to this area of historical scholarship. Time Travel is a useful roadmap that scholars might utilize to explore the fascinating contradictions and interplay between narrative, history and authenticity, so exemplified in the living history museum.