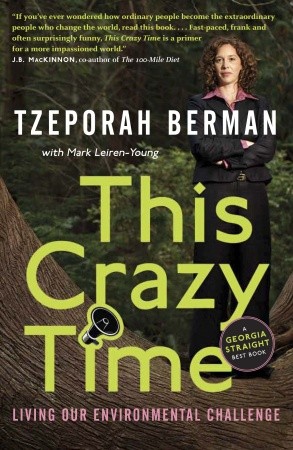 Tzeporah Berman entered the public consciousness as a twenty-something leader of the Clayoquot Sound logging protests in 1993. Since then, she has served a variety of roles within the environmental movement, having co-founded organizations such as ForestEthics and PowerUp Canada while also serving as co-director of Greenpeace International’s Climate and Energy Program. In This Crazy Time Berman, with help from Vancouver journalist Mark Leiren-Young, documents her environmental awakening as a youth and her ensuing — and ongoing — career as one of Canada’s most high profile environmental activists.

Berman cut her teeth as an activist during the “Clayoquot Summer,” and it shows. The first third of the book details how she got involved in this issue, her transformation from an enthusiastic volunteer into a key organizer, and the ensuing fallout. While the protesters’ blockades captured the attention of the general public across Canada and beyond, there was an eventual realization that the most effective means of halting the logging companies would be by convincing those that bought the felled tress that they faced the prospect of a boycott from consumers who did not want old growth forests to be razed in order to print toilet paper and shopping catalogues. Her focus would shift from preservation of British Columbia’s forests to climate change when it became apparent that, should this problem continue unabated, it posed a grave threat to the survival of the planet.

While this look behind the scenes proves interesting, the most revealing passages detail Berman’s efforts to reconcile her environmental concerns with the interests of the various stakeholders. Taken for granted, for example, was the idea that the First Nations population would side with environmental activists in their efforts to stop logging in the Great Bear Rainforest. Reality was, and is, much more complex, as logging was often seen as one of the few viable sources of income for First Nations. Chapter Four details Berman’s efforts to adapt to the reality that there “are diverse interests in every community” (94), and how the two sides began to work toward their mutual self-interests.

This Crazy Time is more than a memoir. Throughout, but in particular in the sixth chapter, the authors provide a “how to” guide for effective campaigning. Based in sociological theory and practical experience, the concepts of “critical pathways” and “power mapping” are explained, as is the importance of utilizing humour, creative thinking, and coalition-building. Readers gain insight into such effective campaigns as “Victoria’s Dirty Secret,” which generated sufficient controversy that the lingerie company soon thereafter ceased using paper derived from old growth forests to print its mail catalogues.

This is an intriguing book. Written in clear prose, it should be of interest to scholars, activists, and the general public alike. That said, I suspect it will have three main constituencies: budding activists hoping to learn from Berman’s vast experience; those interested in the environmental movement; and those looking for information on the effect protesters have on policy-making.