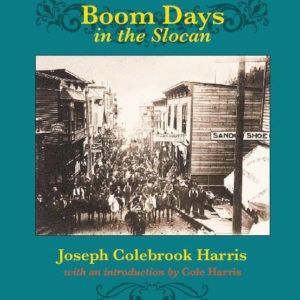 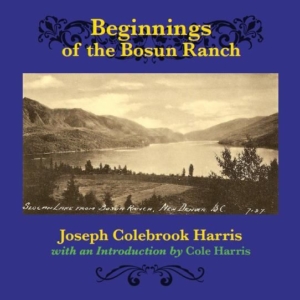 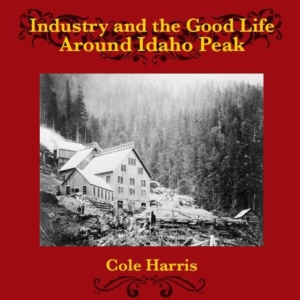 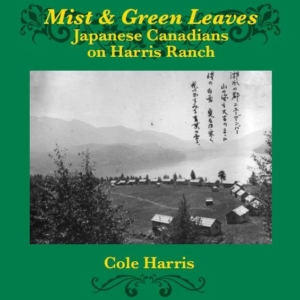 Edited by Cole Harris, the Slocan History Series began with four booklets that focus primarily on the mining “boom days” of the 1890s and their long-term effects on the region. The first two booklets are accounts written in the 1940s by Cole Harris’s grandfather, Joseph Colebrook Harris, about his experiences of the “Silvery Slocan” boom and his establishment of the Bosun Ranch between New Denver and Silverton on Slocan Lake. The third booklet is a reprint with a new introduction to Cole Harris’s well-known 1985 Canadian Historical Review article, “Industry and the Good Life Around Idaho Peak,” which sets his grandfather’s accounts in a wider historical context. The final booklet is Cole Harris’s history and reminiscences of the wartime years when the federal government interned Japanese Canadians on his grandfather’s ranch. As series editor, Harris notes that the booklets are “intended primarily for residents of and visitors to the Slocan Valley in southeastern British Columbia” (Boom Days, i). These well-written, well-illustrated, and accessible booklets provide lively introductions to two distinctive moments in the modern history of the Slocan Valley. Taken together, the booklets also allow for reflection on the colonial and industrial history of British Columbia, about which Harris has written extensively.

Towards the end of his life, at the prompting of his daughter, Joseph Colebrook Harris wrote a long account of his early years in British Columbia, parts of which form the first two booklets in the Slocan History Series:  Boom Days in the Slocan and Beginnings of the Bosun Ranch. Like many early settlers on the West Kootenay’s agricultural frontier in the late nineteenth century, J.C. Harris had a good education and came from a middle-class English family. He settled first in the Cowichan Valley in the early 1890s, visited the Slocan Valley during the boom, and settled permanently on Slocan Lake in 1897. Harris had studied at the Guelph Agricultural College and planned to supply the mining region with fresh fruit and vegetables. However, having arrived near the end of the boom, he had to diversify to make a living:  though he sold farm produce, he also hauled supplies and ore for the mines, worked on road and wharf construction crews, sold firewood, and developed a mining claim.  As the boom wound down, the Bosun Ranch continued as part of a modest commercial economy focussed on New Denver and Silverton. In Industry and the Good Life Around Idaho Peak, Cole Harris views this kind of local economy as a common outcome of the staple economy of Canada. At the same time, Harris notes, his grand father “lived a thoughtful, generous, and happy life on the Bosun Ranch” (Beginnings, 2).

J.C. Harris vividly describes an emerging colonial and industrial frontier in the West Kootenay. In Boom Days, he conveys the intensity of a boom that attracted attention and investment from across the Western world. He describes government officials trying to bring order to a disorderly frontier that extended from the American west, while rapidly emerging communities such as Sandon attempted to service mines and miners and house the owners and managers in style. He recounts the methods of prospectors who discovered and “proved” mining claims to sell to mining capitalists, and the efforts of haulers to move tons of ore with horses, sleds, and wagons, from mines usually located high on mountainsides, to concentrators and shipping points. Harris refers to Sandon’s two railway branch lines, three bank branches, and numerous saloon license applications. All this suggests productive energy, but Harris also describes how whiskey and gambling ruined lives; miners dreamed of getting out of mining; and poor conditions, garbage, and filth led to typhoid fever outbreaks. In the final section of Boom Days, Harris describes the mining boom’s devastating impact on the wildlife and forests of the region. Harris loved the natural beauty of Slocan Lake and criticized miners and settlers for overhunting, clearing forests, and starting fires that burned broad swaths of the country, including communities like Sandon. He evokes “the sickening pall of smoke over the country” that is well known to present-day residents of the region (Boom Days, 43).

Beginnings of the Bosun Ranch tells J.C. Harris’s story of coming to the Slocan, purchasing land, and developing the Bosun Ranch. By 1896, “[a]stonishing stories of the new mining camps” reached the Cowichan Valley where Harris had a struggling farm (Beginnings, 3).  The furor over William Jennings Bryan’s platform for “free coinage of silver” and the enthusiasm of fellow Fabians living in New Denver convinced Harris to investigate the region’s prospects. He describes his search for land with the famous prospector Eli Carpenter, his purchase of 245 acres – “less than twenty acres of which was really fit for cultivation” – between New Denver and Silverton, and his early work clearing the land and making a living (Beginnings, 26). Harris appears as an energetic, sociable settler who enjoyed these early farm years. He had money, too, which likely reduced his worries. Along with land, he purchased a pair of Clydesdales and hired labourers, including a boy from his Wiltshire home, Arthur Cleverly, and a friend from the Cowichan Valley, Charlie King (“the Bosun”). The ranch also employed “a small China boy we called Golly” as cook (Beginnings, 32). Harris was also prosperous enough to use the money from the sale of a mining claim to build a community theatre in New Denver. Nonetheless, as noted above, to make a living he also had to work at various jobs connected to the economy of the towns and mines.  His became a common pattern of life and work in the West Kootenay. Looking back from the 1940s, J.C. Harris evoked an overwhelmingly male and European settler world in the Slocan Valley that remained, until recently, our dominant image of the British Columbia resource frontier, including the “Silvery Slocan.”

Industry and the Good Life Around Idaho Peak makes Cole Harris’s 1985 scholarly article on the Slocan mining boom accessible to a wider audience as a booklet. It also helps readers of the entire series better understand the accounts and life of his grandfather. In a new introduction, Harris sets the Slocan Valley within the traditional territory of the Sinixt, to correct a longstanding colonial belief in an empty wilderness.  Though there were references in other writings to Sinixt and Colville people in the valley in the 1890s, J.C. Harris made no mention of local indigenous people. Cole Harris also corrects his own 1985 statement that indigenous people had never lived near Idaho Peak. One feels the way is open for a fuller colonial history of the region.

BC Studies readers will be familiar with Harris’s framework for understanding the history of the Slocan mining boom as an outcome of the staple economy, especially with respect to the contrasting histories of Sandon and New Denver. However, these first three booklets considered together raise questions about the origins of social relations in New Denver and Sandon. In addition to the staples trade, one wonders how much the long, bitter strike of 1899-1900 over the eight-hour day affected relationships on the Bosun Ranch and shaped the social history of the two communities. In a sense, after 1900, we are looking at two communities in the aftermath of a cataclysm.

The final booklet in the series also considers issues of colonialism and diversity. In Mist & Green Leaves: Japanese Canadians on the Harris Ranch, Cole Harris describes the relationship of his family to Japanese Canadians interned on the Far Field and in the main house of the Bosun Ranch. In August 1942, J.C. Harris leased the Bosun ranch to the federal government as one of the Slocan Valley sites for interned Japanese Canadians. The lease allowed the Harris family to remain on the ranch where they came to know well the 200-250 internees, including fifty elderly men and two cooks who lived in the old ranch house. J.C. Harris supported the internment of Japanese Canadians as a necessary step to protect a vulnerable community during a period of wartime hysteria. He also understood well the long history of hostility and racism towards Asians in British Columbia. And he felt that the Security Commission “handled the situation well and with commendable consideration for people caught in circumstances beyond their control” (Mist, 10). This was a common, and not uncontroversial, response among educated British Columbians.

The Harris family came to admire the internees for their fortitude in the face of hardship. They also appear to have prided themselves on their acceptance of the internees compared to the hostile response of the community in nearby Silverton. Harris includes evidence that the Japanese Canadian children had some positive memories of winter and summer activities around Slocan Lake. J.C. Harris’s son, Sandy, and his family formed especially close relations with internees who lived nearby. We do not learn much about how the adult internees responded to their time on the ranch. Cole Harris concludes that the camps reflected the racism of white British Columbians who had failed to accept diversity. At the same time, despite a history of racism in the Slocan Valley, on the Harris ranch people came to know and appreciate each other. Harris views this as a more positive experience than that of some Harris extended family members who were interned in a Japanese camp in occupied China. It also suggests a tolerance of diversity that hardly existed during the 1890s mining boom.

In Industry and the Good Life, Cole Harris notes that his grandfather’s Bosun Ranch on Slocan Lake “posed many of the questions about this country that, over the years, I have tried to answer” (Industry, 49). The well-produced booklets of the Slocan History Series introduce us to his grandfather and consider some of these questions. The answers suggest how broader forces, including capitalist development in a new colonial setting, affected the lives of a diversity of people living in a remote valley in British Columbia. The people of the Slocan Valley and beyond will find this a useful and interesting series.