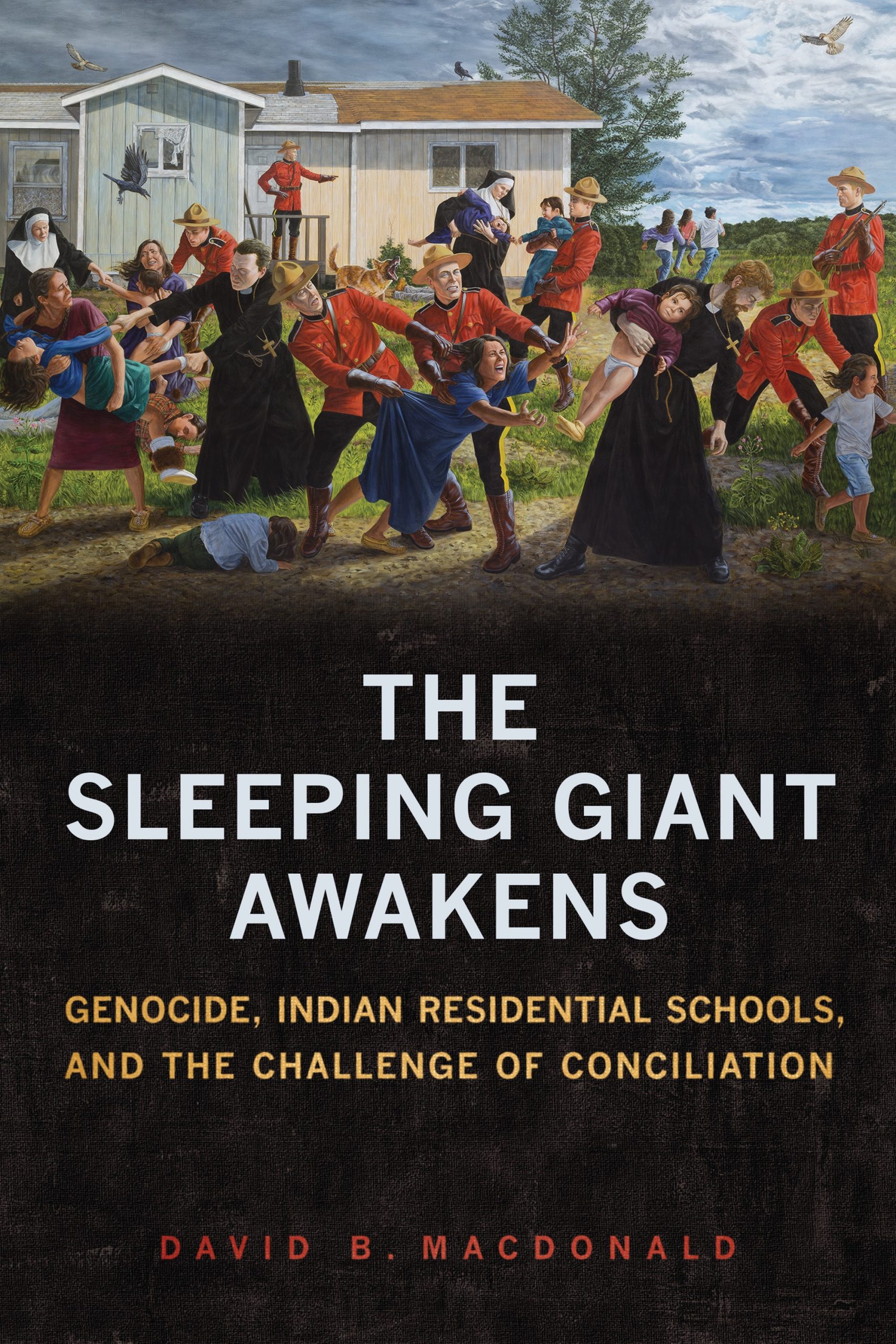 The Sleeping Giant Awakens: Genocide, Indian Residential Schools and the Challenge of Conciliation

By David B. MacDonald

Canada at a Crossroads: Boundaries, Bridges, and Laissez-Faire Racism in Indigenous-Settler Relation

Despite Duncan Campbell Scott’s now infamous assertion as Deputy Superintendent General of Indian Affairs in 1920 that he “want[ed] to get rid of the Indian problem” (National Archives of Canada), the question of whether Canada’s engagement with First Nations was genocidal remains in dispute. This stems in large part from the question of what constitutes “genocide”, and whether the actions of Canadian officials align with these characteristics. The Indian Residential School system (IRS) remains at the forefront of this debate, and with it the Truth and Reconciliation Commission (TRC) has come under intense scrutiny.

In his far reaching and comprehensive work, David B MacDonald seeks not only to assess the impact of residential schooling and the efforts of the TRC, but to situate them in the global, political arena of international law. This he achieves with stunning clarity, distilling complex legislation and centuries of colonial oppression into a powerful and cohesive narrative. Beginning with a comprehensive history of the formation of genocide law, MacDonald demonstrates how the influences of colonial nations effectively removed definitions of genocide that would have implicated their own policies, contextualising the ongoing struggle of Indigenous survivors within a system designed to ensure their failure. The Sleeping Giant Awakens unfolds largely chronologically, with each chapter providing context for those that follow, demonstrating the ripple effect of past actions and the need to reassess preconceptions of understanding.

MacDonald effectively engages critics who argue against labelling the IRS system as genocidal, demonstrating that recognising genocide is necessary for productive change to Indigenous-settler relations. The Sleeping Giant Awakens succeeds in this regard due to MacDonald’s meticulous approach to research and captivatingly persuasive style. Drawing on resources from archival material, Indigenous accounts, legal precedent, and academic literature, he skillfully weaves a narrative that is as compelling as it is insightful. He asks the reader to engage in serious reflection, and provides the tools to do so through clear language and an engaging style that will be approachable to scholars and casual readers alike.

Perhaps the greatest achievement of this book is that while MacDonald asks a significant portion of his readers to reassess their own privilege and acknowledge the dark history of their country, he also empowers them to make these changes in practical ways. He reminds readers that contrition and acknowledgement are not enough, that a thoughtful and proactive approach is the only way to move towards healing and conciliation. Certainly this is a must-read for all seeking to understand and change the legacy of Canadian history, and a significant milestone in the literature of (re)conciliation.

Canada at a Crossroads works in conjunction with The Sleeping Giant Awakens to create a critical foundation of literature that addresses macro and micro narratives of Indigenous-settler relations in Canada. Jeffrey Denis sites himself firmly within sociological concepts of group theory to understand the motives behind laissez-faire racism in small town western Ontario. Drawing on eighteen months of ethnographic research and semi-structured interviews, Denis engages with the complexity of intercultural relationships as they play out in individual and intergroup dynamics. Effectively weaving personal accounts from Indigenous and settler occupants of Rainy River District with analytical data and trends in Canada more broadly, he reveals the complexity of national dialogues playing out in small, interconnected communities.

Canada at a Crossroads critically addresses the unique position of Canada as a nation established on top of existing nations, and the problematic responses of settler societies to the resilience and self-determination of Indigenous communities. Through focusing on individual responses to perceived threats to settler dominance, Denis reflects on the difficulties of overcoming racism in a settler system that on the surface considers there to be no problem, while simultaneously undermining Indigenous cultures. Identifying this “apartheid of the mind” (298), Denis considers how fundamentally disparate concepts of Canada are used to “bridge” and “barrier” attempts at conciliation. Much like MacDonald, Denis shows the paradoxes experienced by Indigenous people attempting to negotiate a system that was forced upon them, facing the duplicity of settler societies that want Indigenous people to “be us, but you can’t be us” (144).

Given the focus on group identities in the context of Canada, I was surprised by the absence of discussion of Boas’ influence on concepts of Indigenous groups as this fundamentally affected how settlers conceived of Indigenous people and how they in turn were encouraged to perceive themselves and one another. Similarly, while Denis makes compelling points about the legacy of the IRS system and demonstrates clear divergence between settlers who considered Prime Minister Harper’s 2008 apology an end, and Indigenous communities who viewed it as one small step on a journey to healing, he gives scant background to this devastating aspect of colonial history. This does not detract from the overall success of his work but requires it to be read with at least some prior knowledge of residential schooling and assimilationist policies enacted in nineteenth and twentieth century Canada.

Canada at a Crossroads succeeds through its comprehensive attention to detail within a single location that both epitomises wider trends in Canada and represents individual attempts to overcome laissez-faire racism. It holds a mirror up to settler Canadians and shows how easily racist ideals can poison good intentions. It is eye opening and insightful, adding localised nuance to an issue of national importance.