The Sacred Headwaters: The Fight to Save the Stikine, Skeena and Nass 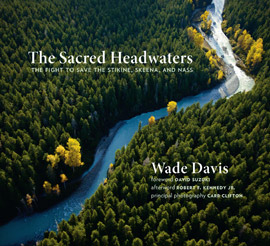 On 17 April 2012, Natural Resources Minister Joe Oliver announced that his department would follow through on the Federal Conservative Party 2012 budget promise to “streamline” the Environmental Assessment process in Canada. The new process will limit the time frame of assessments to one year and will restrict the ability of local, non-state, and governmental stakeholders to meaningfully participate in the outcome of reviews. The move is meant to boost the short-term commercial potential of the oil, gas and mineral industries by providing a measure of certainty within the volatile economic circumstances of extractive economies, so often subject to the whims of international finance and capricious commodity prices. The appeal to certainty is curious in this context, considering that British Columbia’s First Nations have sought certainty over land and treaty rights for well over a century and “radical” environmental groups (as anointed by Oliver himself in his blustery and extreme open letter of early January, 2012) have long advocated the protection of sensitive ecosystems in British Columbia and elsewhere. It seems clear that this new assessment apparatus will help industrial dreamers bring more projects to fruition in out-of-the-way places like the Sacred Headwaters in northwest British Columbia. In other words, more mines, the rapid escalation of bitumen production in the Athabasca Tar Sands, and the persistence of fears about the social, economic, and environmental dislocation within indigenous communities in whose territories many of these industrial megaprojects are slated to take place.

Oliver and the federal Tories succeeded in ramming through the reductive and investment-friendly changes to the environmental assessment process within Bill-C38, the notorious Omnibus Bill so vilified by its opponents as an affront to political debate. The contemporary hollowing out of environmental assessment and protection lends added significance to interventions like Wade Davis’s The Sacred Headwaters: The Fight to Save to Save the Stikine, Skeena and Nass. The book is an attempt to push a debate around mining, resource extraction, and development into the centre of political discourse in British Columbia, where resources have long been an uncritical economic driver. Foremost is Royal Dutch Shell’s attempt to harvest coal bed methane through hydraulic fracking, a process that uses vast quantities of freshwater mixed with sand and a chemical cocktail of unidentified constituents to crack hard rock underground and thereby release gas to be collected at the surface. Companies have succeeded in obfuscating the contents of the injected frack fluid but, as Davis contends, the cultural and ecological repercussions of this work in the Sacred Headwaters are likely catastrophic. Shell’s project is one of many industrial megaprojects that are moving forward in the wake of the construction of the Northwest Transmission Line (NTL) that will be completed in 2015 and will electrify the northwest quadrant of the province. Fortune Minerals’ newly renamed Arctos Anthracite Project and Imperial Metals’ Red Chris Copper/Gold property on Todagin Mountain will also benefit from the NTL and will likewise threaten the ecological integrity of the area. It is against this backdrop of industrial expansion that Davis and a group of photographers from the International League of Conservation Photographers organized a RAVE (Rapid Assessment Visual Expedition) to chronicle the values of the threatened landscape and to focus attention on the region before the anticipated invasion of open pit mines, frack wells and attendant infrastructure.

The Scared Headwaters contains three overlapping narratives that each offer vital perspectives on the proposed extractive economies and on efforts to slow development in northwest British Columbia. Davis, anthropologist and National Geographic explorer-in-residence, is operating at the front of a large group of contributors. Davis’s prose is evocative of the region that he is passionate about. The area is imperiled by development and resource plays, and Davis aims to hamstring these efforts with words and ideas. He demonstrates the power of his tools but, in terms of impact, his narrative takes a back seat to the photographs and words of the other contributors. The photographs are often spectacular. Wide vistas capture the incredible diversity of the landscape. Wildlife and game animals lend a historicized sense to the region that is reinforced and brought into the present by photographs of the Tahltan people exercising the cultural and economic vitality that is, in many ways, still deeply enmeshed with the land. The most extraordinary parts of the book, however, are the large block quotes from Tahltan men and women as they speak about the land and its many meanings. Erma Bourquin claims, “If there is anything happening to this land, we should be the ones who can tell them where they can and cannot go.” Rita Louie tells us, “You see all those mountains? Our minds are in every mountain. Our memories are in every valley. Our children are in every river and stream that flows here. That’s were we belong.” And Rhoda Quock reminds outsiders and interlopers that, “These Sacred Headwaters are the lifeblood of our people. This water is a symbol of our people. Just as this water will flow back into the three great rivers that sustain our people, we will return to our territories and protect out land. At the Sacred Headwaters, we are drawing a line in the sand; this country bestowed to us by the Creator will be protected.” The grace and depth of conviction is inspiring.

This is not a book meant for a scholarly audience, although scholars of many stripes would benefit greatly from its contents. Having said that, the book could be an invaluable teaching tool in the many disciplines that touch on issues of environmental justice and governance, the movements of extractive economies, and the long and ongoing colonial legacies in British Columbia and Canada. But The Sacred Headwaters should find a wide audience amongst the general public as a book to be pondered and perused, debated and contested, and taken seriously as a political and ethical intervention into the heart of the fractious heart of an ill-advised development programme in a culturally and ecologically vital part of the province. Davis’s marshalling of the project, along with support from David Suzuki and Robert Kennedy Jr., will lend institutional and intellectual weight as well as encourage awareness of these critical issues far beyond the boundaries of the three watersheds under threat. And rightly so — but it is the photographs and the simple, distinct, and evocative words of the Tahltan and other local contributors that will generate the lasting effect of this fine volume.

The Sacred Headwaters: The Fight to Save the Stikine, Skeena and Nass
By Wade Davis
Vancouver: Greystone Books, 2011, 160 pp. Photographs. $50.00 cloth