The Queen of the North Disaster, The Captain’s Story 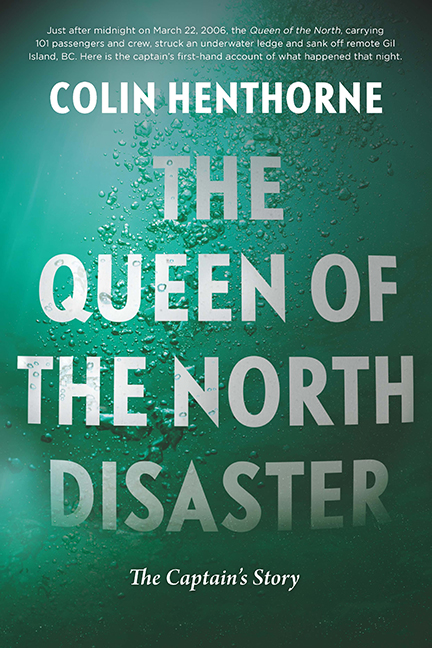 As one might expect from a competent and conscientious career mariner, Colin Henthorne’s account of the sinking of the Queen of the North on March 22, 2006, a little south of Prince Rupert on British Columbia’s north coast, is detailed and well organised. He is obviously still haunted by this event that forever changed the lives of those who lived it. Henthorne describes how this vessel – which he dearly loved – was built and laid out, how it operated, and who did what on board. As in many crime novels, the deed is done – the boat sunk – scarcely a quarter of the way into the book, but Henthorne has not written a suspense thriller or a whodunit. And, unlike BC Ferries senior management and the courts – but in common with some technical specialists who have considered the Queen of the North puzzle at length – Henthorne does not buy that the sinking was the fault of a single negligent Fourth Mate. Like the BC Ferries’ own erstwhile director of safety, health and environment, Captain Darin Bowland, Henthorne believes instead that “given the state of the company’s safety practices and protocols, the fleet [in early 2006] was an accident waiting to happen …[and] that systemic problems that affected the whole fleet … might have been the cause, or one of the causes, of the sinking of the Queen of the North” (67).

Henthorne had only recently become a BC Ferries manager when his ship went down, following a long, diverse, and respected maritime career. Like Bowland, he had been vocal in his criticism of such shortcomings in the fleet. Bowland chose to resign his position after the Queen of the North disaster, stating that “the company scares me and I am not willing to carry on within the current culture and organisation” (68). Meanwhile Henthorne was absolved of blame for the sinking and instead praised for the practiced expertise with which he and his crew promptly evacuated the rapidly sinking ship on that dark, rainy March night.

The contrast with the sinking of the ferry, Estonia, in the Baltic Sea a few years before is striking. Henthorne briefly refers to this disaster but does not dwell on it. The Estonia’s fate is a chilling reminder of how truly dreadful a ferry sinking can be. After that ship went down, the sea was strewn with over eight hundred dead passengers, and European news media were full of surreal images of corpses floating in bright blue waters on the sunny day after – some still inside their flooded life rafts. That the Queen of the North sinking did not result in a similar tragedy, despite the well documented deficiencies of the BC Ferries’ safety and operating systems, had much to do with the skill and bravery of her captain and crew. Henthorne’s reward was to be fired. So it’s not surprising that much of this book reads like a highly technical, fact-finding and hair-splitting sort of twenty-first century J’accuse, looking at the Queen of the North affair, and the way BC Ferries Corporation chose to deal with it, as a telling indicator of what is wrong at the core of this essential public service in the BC heartland.

Now, if I had written such a book, people could rightly complain of my bias against the senior management of this corporation. After all, over the past fifteen years, it has done much well documented harm to the coastal communities it is meant to serve, reducing schedules, jacking up fares far beyond the rate of inflation while giving their bloated management cadre healthy bonuses, and generally doing their best to stoke the flames of the low-level class warfare that often lurks between decks in this fleet. Unlike me though, Henthorne apparently believed in the fresh broom that was to have mucked out the stables of the newly privatised BC Ferries early in the century. He had lived through the silly years when a government of the left had appointed an old mill worker to oversee the construction of expensive new “fast ferries” that, predictably perhaps, proved unmitigated disasters. So Henthorne’s disappointment was bitter as he was confronted with growing evidence of the blithe disinterest amongst the new management of the “new BC Ferries” about the growing list of safety concerns being raised by people like Bowland and himself. Henthorne contends that his firing was the result of his having raised such concerns, even after becoming a manager, and thereby embarrassing the corporation’s senior management. They almost said as much, criticising Henthorne for not being a team player on their “management team.”

The most important results of this fiasco were the presumed deaths of passengers Shirley Rosette and Gerald Foisy, whose remains have never been found, and the imprisonment of Fourth Mate Karl Lilgert. It ought to have also led to a permanent upgrading of the fleet’s safety and emergency response capacities, procedures, and skills. Alas, the corporation’s response appears to have been disturbingly Trump-like, with much attention to reputation management, blaming of underlings and shooting of messengers. Henthorne states near the end of his book that “I am alive today because I had a crew that could have launched the lifeboats and life rafts with their eyes closed. I don’t think that could be said of many of today’s crews – not because of any deficiency on their part, but because the equipment they have been saddled with cannot be exercised on a regular basis” (155). Is this true? If so, it is not reassuring for those of us, roughly 20 percent of British Columbia’s population, who depend on these ferries as an essential service, let alone for anyone boarding them for pleasure. Will it take an Estonia on our coast before these issues are addressed?