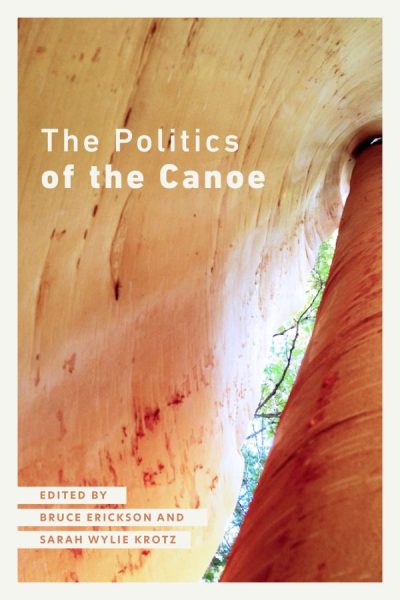 The Politics of the Canoe

I will admit to feeling some skepticism when I agreed to review Politics of the Canoe, an academic volume edited by Bruce Erickson and Sarah Wylie Krotz. Too often the words “canoe” and “politics” conjure images of mostly white, mostly male, sometimes well-meaning social justice-types whose good intentions are, well, good, but fall short of addressing the problematic, colonial roots of outdoor recreation. This imagery and the worldview that goes with it, which I feared would dominate the text, is in fact explicitly addressed and taken down throughout the contributed essays. And, as editors, Erickson and Krotz made many choices which helped to assuage my doubts: the cover art is a beautifully photographed sheet of birch bark, and the title, while at first glance vague, becomes an invitation and I hope results in some readers picking up the book who otherwise would not.

Divided into three sections – Asserting Indigenous Sovereignty; Building Canoes, Knowledge, and Relationships; and Telling Histories – the book starts with an introduction from the editors which is anchored in Leanne Betasamoke Simpson’s short film entitled “How to Steal a Canoe”. This film and the accompanying framing of the canoe as a contested political site in the Canadian colonial context firmly anchor the subsequent chapters. A wonderful feature that reinforces the editors’ intent to tie the chapters to the Land is the use of maps at the start of each chapter. Using these maps to situate the reader is a great place to “put in” to these chapters. Politics of the Canoe highlights the canoe as a site of cultural and linguistic resurgence for Indigenous communities and nods to the ways in which settler communities complicated, obfuscated, and in some cases, outlawed these cultural practices.

It’s difficult to summarize an academic text with multiple contributors and so I will highlight a few chapters that have stuck with me. I particularly enjoyed the chapter by Cushman et al. which speaks to the role of canoes in cultural revitalization in the Pacific Northwest. I was struck, as a parent who has recently given birth, by Cushman’s anecdote of completing a 6-mile paddle while in labour. She relays her comfort in traveling her ancestors’ canoe routes while preparing to become a parent herself. Ling Chapman’s offering outlines the complicated history and implications of the Tappan Adney archives of model canoes and other Indigenous technologies. Chapman argues that while tied to a colonial whitewashing and exoticizing of Wolastoqiyik peoples, Adney – a settler ‘adventurer’ type – inadvertently made highly accurate and detailed representations of Indigenous canoe-building practices that can now be used for language and cultural revitalization. Such a tale highlights the messy entanglement that is colonization. Gendron’s chapter on her journey to revisit a canoe route traversed by her ancestors is a meaningful and critical contribution to scholarship seeking to understand the ways in which settlers view canoeing through the “prism of colonization”. Repurposing Peggy McIntosh’s metaphor of the white privilege knapsack, Gendron analyzes and assesses how she packed her canoe for her trip and the inextricable links to class and colonization.

Ultimately, I think the very thing that caused my skepticism is also the reason I think this book is poised to create positive ripples amongst its readers. It does not present itself as a radical re-envisioning of the canoe as a recreational vehicle and yet, in many ways, it does. It simultaneously appeals to lovers of the canoe and challenges them to examine their assumptions about canoeing as an activity that happens somewhere out there, in “nature”, which many of the contributors remind us is a Euro-colonial construct. Politics of the Canoe is an invitation to learn, and I suggest the editors have accomplished a difficult task: speaking to the non-converted, creating critical conversations, and promoting deeper learning about the canoe and the ways it is tied to our colonial histories.