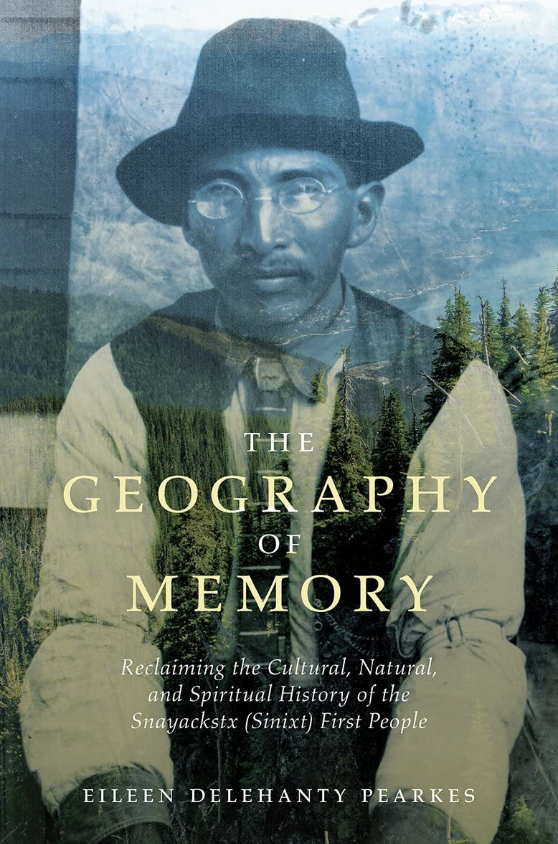 The Geography of Memory: Reclaiming the Cultural, Natural and Spiritual History of the Snayackstx (Sinixt) First People

The Sinixt are an oft-forgotten Indigenous people in British Columbia history. For thousands of years, their people lived along the upper Columbia River and its tributaries—a transboundary region of Eastern British Columbia and Washington. Although the vast majority of Sinixt territories lie north of the border, the majority of Sinixt people now live in the United States where they are recognized as the Arrow Lakes Indians of the Colville Confederated Tribes. In 1956, the Canadian government declared the Sinixt extinct, aiming to extinguish their rights and title in British Columbia. However, the Sinixt have fought to reassert these connections, culminating in a 2021 Supreme Court of Canada ruling that they remain an Aboriginal people of Canada.

Eileen Delehanty Pearkes has sought to address this neglected story in her book, The Geography of Memory: Reclaiming the Cultural, Natural and Spiritual History of the Snayackstx (Sinixt) First People. The text is presented as a new edition of a book originally published two decades ago by Kutenai House Press as The Geography of Memory: Recovering Stories of a Landscape’s First People. However, the first edition was a compact tract that totaled a mere 95 pages; the new edition is substantially expanded, triple the length of the original, including important new information on how Sinixt people are reclaiming connections to their transboundary territories. Thus, Pearkes’ new edition is better understood as a sequel than simply a revision.

The book is not structured as a historical narrative but rather a kind of travelogue. It details Pearkes’ encounters with places of historical and contemporary significance to the Sinixt, including those along the Arrow Lakes, from Rossland to Kettle Falls, around Slocan Lake, and down the west Kootenay River, as well as in the lands of Colville Confederated Tribes in Washington state. Pearkes mixes narratives of her personal travels with information from archaeological and ethnobotanical records, historical anecdotes, and contemporary stories of Sinixt people reconnecting with their territories.

Pearkes provides the greatest depth in her review of the ethnographic and archaeological record related to the Sinixt. She effectively draws upon the information collected by James Teit in the early-twentieth century and William Eldendorf’s fieldnotes of his interactions with Sinixt elder Nancy Wynecoop in the 1930s. She also draws upon the ethnobotanical research of Nancy Turner, Randy Bouchard, and Dorothy Kennedy. Reviewing this research, Pearkes particularly stresses the importance of women’s traditional knowledge and activities.

Pearkes’ approach to history is somewhat fragmentary and anecdotal, retelling events in association with the places she encounters in her travels rather than in accordance with a more conventional chronology. She recounts stories, such as the murder of Cultus Jim, to highlight the devastating impacts of settlement on the Sinixt, and the indifference of settler colonial authorities to violence against Indigenous people. Pearkes also details how settler colonial states have fragmented Sinixt geographies. The imposition of the Canadian-US border restricted Sinixt movement across their traditional territories, eventually leading to the Canadian government declaration that the Sinixt were extinct north of the 49th parallel. Through the middle decades of the twentieth century, Sinixt waterways on both sides of the border were further transformed, as massive hydroelectric dams flooded old Sinixt village sites and devastated salmon fisheries throughout the Columbia River Basin.

At times, Pearkes’ emphasis on the historical ruptures of colonialism has the effect of situating the Sinixt connections to the land in the past. A repeatedly invoked image is that of the Sinixt as haunting the landscape. For instance, after retelling how the family of Baptiste Christian was forced off the land by Doukhobor settlers, Pearkes describes them as a ghostly presence inhabiting the Kootenay River. She writes, “I see a tragically displaced family and a nearly forgotten culture in the hard, dancing shards of light reflecting off the free-moving river” (p. 74).

However, the book also emphasizes that Sinixt people are actively reanimating their connections to the upper Columbia River. One of the strongest elements of the new edition is the inclusion of contemporary Sinixt voices, including Laurie Arnold, Ladonna Boyd-Bluff, Shawn Brigman, Larae Wiley, and Judge Wynecoop. They share stories of Indigenous cultural and political revitalization, both describing the restoration of traditional practices and contemporary political movements to expand Sinixt rights and the resource governance authority of the Colville Confederated Tribes.

Ultimately, Pearkes calls upon readers to expand thinking about the meaning of settler-Indigenous reconciliation. As the story of the Sinixt highlights, historic processes have displaced Indigenous peoples across international borders. But the territorial boundaries of the settler state cannot set the limits of decolonization. Contemporary Sinixt activists demonstrate that reconnecting to the land requires acting beyond the political and legal geographies of settler society.