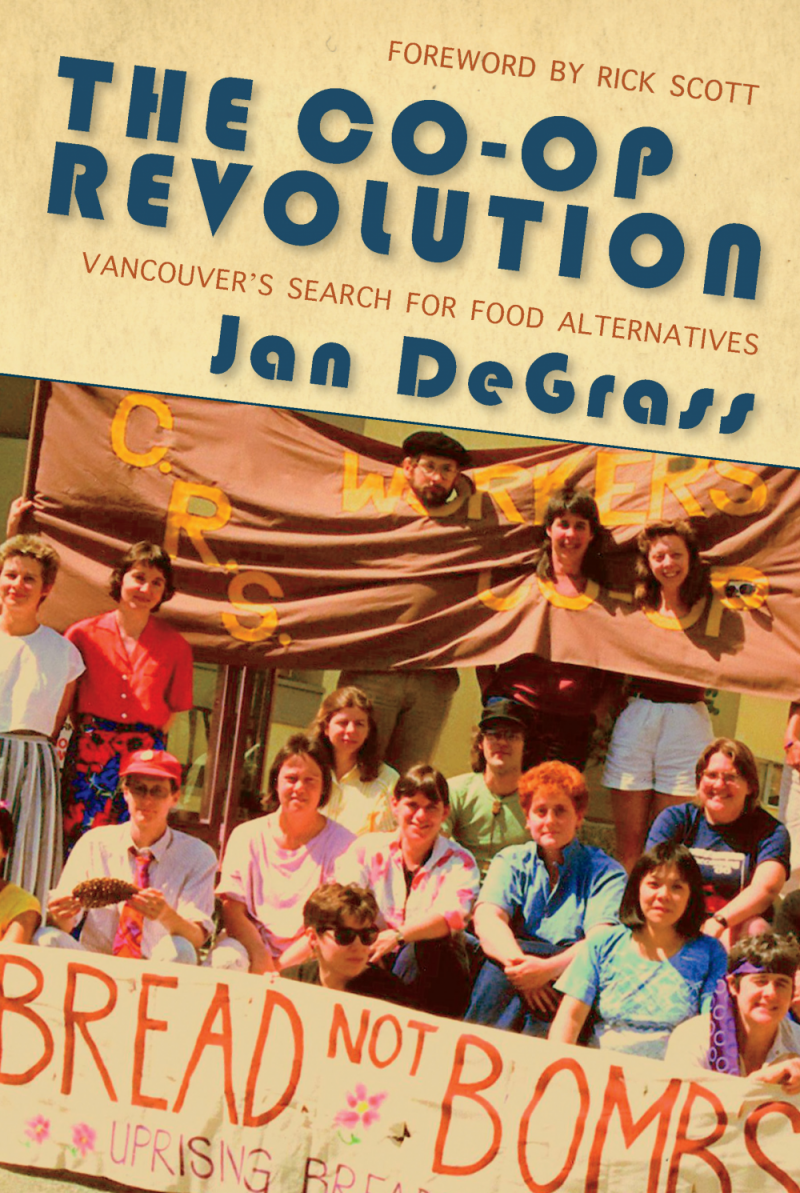 When growers, producers and practitioners self-organize around shared interests in the local foods economy, their social and economic actions—whether through a farmer’s market, buying co-op or the production of local food—can feel tenuous on the ground. Even though the intention is to localize the food source and democratize business processes, the impact of the work is intangible: it is measured in relationships and the general feeling of “getting by.” Regardless, over the past fifty years, these actions have had enough of an economic impact to strike fear into the heart of the commercial grocery industry, resulting in a mix of co-option (Save-On-Foods, 2018) and smear (Desrochers, 2019). Jan DeGrass’ 2019 memoir, The Co-op Revolution: Vancouver’s Search for Food Alternatives, shares how a community of like-minded folks initiated many of these activisms in British Columbia, developing the food co-op movement and shaping the way many people in the province grow, sell and eat food.

The main narrative of DeGrass’ memoir follows her own timeline as she describes her experiences working in the different parts of Collective Resource and Services (CRS) Worker’s Co-op in a period from 1975-1984. Already interested in co-op organizing and working, she moved west from Ontario in the mid-1970s to work with CRS across many of their projects, including the Tunnel Canary Cannery, Queenright Cooperative Bee Keepers, Uprising Bakery, East End Food Co-op and Fed-Up, a food wholesaler that would later become Horizon Distributors. The text includes a play-by-play narrative of the ins and outs of the life of a co-op worker and organizational founding member, while also offering a sobering reminder of the sheer level of financial, emotional and physical labour required of the folks at the front of the co-op movement. Even capturing the foibles and follies of the co-op (e.g. a truckload of honey spilling down a hill on Great Northern Way), DeGrass offers readers a close look at the organizational anarchy that sometimes accompanies Do-It-Yourself business and community actions, making careful mention of the financial operations of the co-op and its reliance on members’ ongoing contributions. In doing so, however, DeGrass’ attempt to fill the gap and write holistically about the food co-op movement in B.C. skirts around important discussions about neoliberalism and corporate pressure in the food landscape. While she admits that “the ‘new wave’ of co-ops did not bear out their initial promise of transforming society” (159), DeGrass delicately champions the work of CRS for propelling organic, whole foods into the mainstream (158).

Although time serves as the main thematic organizer of the text, the movements that DeGrasse was a major contributor to are chronicled in a vacuum. While she accounts for the ecosystem of co-ops in B.C. that she was part of, this orientation centres what she describes as white bread: “mostly all-white and mostly middle-class” men and women (124). Her erasure of movements led by Indigenous folks and people-of-colour who co-existed in the same geography at the same time—for example the Native Alliance for Red Power (NARP), American Indian Movement (AIM) and the Canadian Farm Workers Union—reflects the food movement’s inability to wrestle deeply with what might be at stake for those communities that they are not a part of (Maracle, 1990; Simon Fraser University, n.d.). Because of this omission, readers might forget that DeGrass is speaking alongside robust bodies of work concerned with decolonization, food justice and locally-grown economies (Gottlieb and Joshi, 2010; Alkon and Agyeman, 2011; Kepkiewicz et al, 2016). While there are times in the text where DeGrass relies on hindsight to bring up these complexities, in each of these instances—like the time she recalls performing a micro-aggression toward an Indigenous customer at Uprising Bakery and was called out by a staff member who is identified as a person of colour —she spends no more than a paragraph or two wrestling with her complicated feelings and experiences (123-124).

The meaningful lessons DeGrass attempts to pass on through the text about collaboration, resilience and ingenuity are thus disjointed and soaked in a racial and class privilege that, while typical of many economic and social activists of the time, does not necessarily benefit the history of the B.C. co-op movement nor the possible strengths available to DeGrass in her own memoir. This region’s shared struggles against the industrialization of the food system go nowhere if those with privilege, like those in DeGrass’ own co-op community, refuse to explore the deepest parts of their privilege and how it gets in the way of food justice. Because the text is a memoir, one could forgive this of DeGrass, but by the time she admits that members of the co-op were feeling burned out in the early 1980s, the book itself burns out as her own involvement with the co-op wanes. However, there was so much more about DeGrass’ own life and perspective we miss out on as the text fizzles and the challenging parts of her experience go unexplored.

Alkon, A. 2012. Black, White, and Green: Farmers Markets, Race, and the Green Economy. Athens, GA: The University of Georgia Press.

Desrochers, Pierre. 2019. The Myths of Local Food Policy: Lessons from the Economic and Social History of the Food System. Fraser Institute.