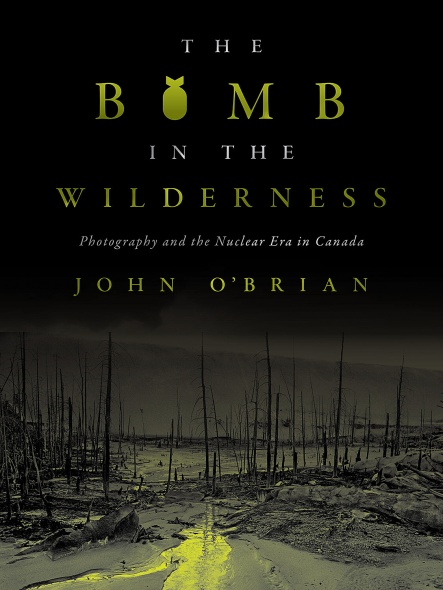 The Bomb in the Wilderness: Photography and the Nuclear Era in Canada

John O’Brian’s recent book on the photographic representation of the nuclear age focuses on the Canadian context and readers with an interest in photography, atomic age culture, and Canadiana will not be disappointed. The Bomb in the Wilderness: Photography and the Nuclear Era in Canada takes a wide view of what constitutes nuclear photography, a category of particular interest to O’Brian, Professor Emeritus of Art History at the University of British Columbia, who has curated exhibitions, edited books, and published numerous essays on the topic over the last fifteen years.

Employing an accessible yet scholarly approach, O’Brian grounds his discussion of nuclear photography in the history of Canada’s involvement in the nuclear era, dating from the Manhattan Project (1942), through to protests against atomic weapons testing in the 1960s and 70s, and on to the state of Canada’s nuclear power industry today. Throughout the book ‑ organized into seven short thematic chapters which ebb and flow across time periods and geographical regions ‑ there are many points of reference to Canada’s often ignored or down-played history of nuclear involvement. Each of these moments is copiously and visually rooted in the theory, language, and history of photography.

O’Brian discusses a wide variety of photographs including: official government testing records, newspaper reportage of scientists and survivors, documentary projects exploring hidden histories, artistic responses to nuclear events, commemorative postcards, and everything in between. Tellingly, not all the images included are Canadian. Yet each event that he analyses through their photographic remains leads back in some way to the country which has played a central role in the technological development of both the military and peace atoms. This history is important to O’Brian not only as a scholar but also as a grandparent (the book is dedicated to his grandkids), a Canadian citizen concerned by the lack of widespread knowledge about our history of nuclear involvement, and the son of a former Canadian officer in the Royal Air Force who flew against the German Luftwaffe in the barely “pre-nuclear era” (6). O’Brian’s passion for the subject comes through strongly and his clarity of prose is sure to satisfy readers who are less familiar with the discourse of photographic history and theory.

This is not a history book that is beautifully illustrated; it is a visual history of how photography is (to paraphrase O’Brian) “intimately connected” to the nuclear past and present, as “one of the primary ways, if not the primary way, that nuclear episodes and activities are represented and remembered.” (xiii). O’Brian works to demonstrate this role on two fronts: through the reviving of often forgotten nuclear historical events in Canada (such as the historical manufacture of heavy water in Trail, British Columbia for Chalk River, Ontario’s early weapons program) and by integrating those moments and their photographic records and responses into the transnational history of the nuclear era. As a result, O’Brian does scholars of environmental, nuclear, and cold war era visual culture a great service as he brings together images and ideas in an interconnected web of analysis that complicates the chronological narrative of events (a timeline is included at the back of the book for those who want it). Ultimately, O’Brian argues, this book is about the way that photography may alert us to nuclear risk, or may numb us to its dangers (xiii). This is a question that many scholars, from Susan Sontag to Judith Butler, have grappled with. O’Brian’s many years of engagement with this question, and with the larger “archive” of images from the ongoing nuclear era, will help readers navigate these arguments with a sure hand.