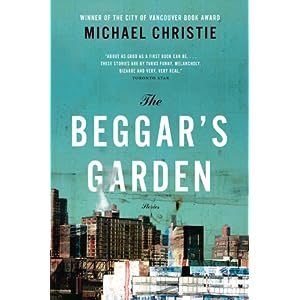 When I first picked up Michael Christie’s collection of short stories, The Beggar’s Garden, I worried that it would be an overly romanticized or pitying account of the residents of Vancouver’s Downtown Eastside. Yet, as I paged through “Emergency Contact,” the opening story of the collection, these fears were quickly put to rest. The author information at the back of the book tells us that Christie once worked in a Vancouver Eastside homeless shelter and “provided outreach to the severely mentally ill” – experiences and knowledge that he clearly and successfully puts to good use. In “Emergency Contact,” Christie could have told a comical story of a woman who was seeking attention from a handsome paramedic and who was condemned and dismissed as ridiculous or unstable. Instead, he represents a series of actions in a woman’s life that reveals the depth of her utter loneliness, desperation, and humanity. This is the strength of Christie’s work: he backs away from moral judgments, caricature, and overly dramatic portrayals, instead opting for straightforward description and leaving judgment to his readers.

In “Discard” a lonely and depressed grandfather glimpses his long-lost grandson in a televised special on homelessness in Vancouver. Christie subverts the predicted rescue narrative, and, ironically, it is the grandfather who finds a sense of redemption on the streets of the city. The most powerful story of the collection is “The Extra.” Here, Christie reveals the squalor two men are forced to live in at the hands of poverty and a dishonest landlord. The narrator of the story is intellectually delayed due to brain damage that occurred at birth and supports himself through disability assistance. The narrator’s description of his roommate Rick conveys a sense of love, friendship, and protection among the two men as they attempt to survive, take care of each other, and get ahead in the world. Yet, ultimately, this story is one of depravity and betrayal, both magnified and assuaged by the knowledge that this betrayal is neither recognized nor understood by the narrator. Christie does a superb job of illustrating the positive connections people make with one another alongside what they are capable of doing to each other.

Christie’s collection is comprehensive: there are stories here of the homeless and hospitalized, yet there are also stories of friendship at a dog park, thrift-store ownership, juvenile car-thieves, and the changes that take place through love and marriage. Other than the fact that these stories take place in Vancouver’s Downtown Eastside, they bear little similarity to one another, and, despite their setting, a sense of place is sometimes lacking. The Downtown Eastside is little more than a backdrop for the characters – both a strength and a weakness of the collection. While Christie is successful in challenging many of the popular stereotypes of the Downtown Eastside, at times I felt at a distance from the stories, and I searched for more emotional depth in the collection, a deeper connection with the characters. Yet, The Beggar’s Garden is ultimately a successful volume and one that opens a much needed door onto life in Vancouver’s Downtown Eastside.