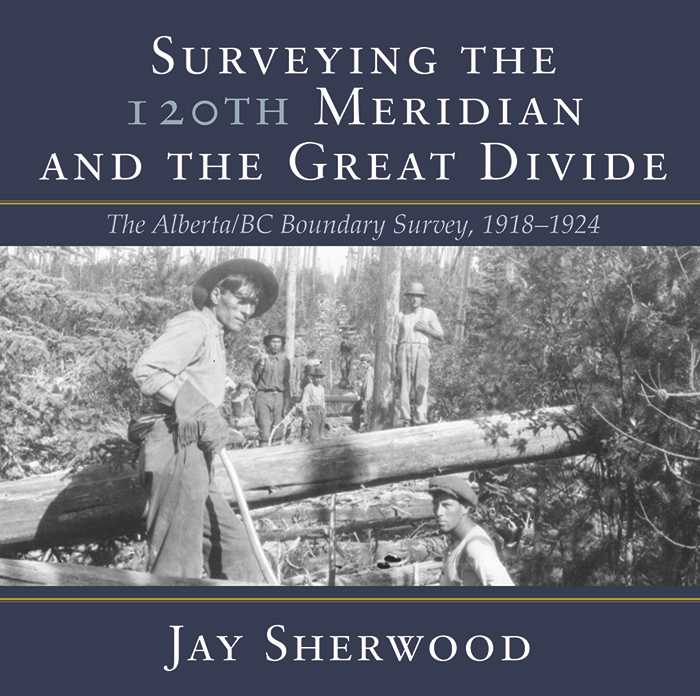 Surveying the 120th Meridian and the Great Divide: The Alberta-BC Boundary Survey, 1918-1924

In this, his ninth monograph on surveying in BC, Jay Sherwood returns with the second of two volumes on the work of the Alberta-BC Boundary Survey in the early twentieth century.  The first installment, Surveying the Great Divide (Caitlin Press 2017), documented the substantial collaborative effort to demarcate the southern portion of the provincial boundary along the Continental Divide between 1913 and 1917.  This subsequent volume follows the same surveyors over the next seven years, focusing on BC Commissioner A.O. Wheeler’s struggles to survey the height of land northwest of Howse Pass and Alberta Commissioner R.W. Cautley’s efforts to demarcate the boundary line along the 120thMeridian, from the Continental Divide towards its northern terminus at the 60thparallel—work that BC hoped would facilitate agricultural development in the Peace River Block.  Building on the work outlined in the first volume, these prodigious efforts produced five thousand additional landscape photographs, the first detailed topographic maps of the central Rockies, and dozens of permanent boundary markers erected in the high mountain passes and at regular intervals along the 120th Meridian.

Readers familiar with Surveying the Great Divide will find more of the same from Sherwood’s sequel. Following three scene-setting chapters which, frankly, reproduce much of the biographical information and discussion of survey techniques found in the previous book, Sherwood provides seven chapters detailing the myriad adventures and adversities these surveyors confronted each field season.  As Wheeler and Cautley usually worked separately in these later years, most chapters start with Wheeler and his team, offering evocative accounts of the daily ordeals associated with surveying the complex terrain of the central Rockies. In contrast, these chapters often conclude with a more truncated summary of Cautley’s field work, reflecting the fact that, while arduous, the work of blazing a boundary line along the 120thMeridian generated far fewer incidents of note.  As with the previous volume, Sherwood supplements his narrative with a handsome series of black and white photos, some documenting the surveyors at work (or play!), others offering up the beguiling high-altitude landscape views captured through Wheeler’s phototopographic work. In later chapters, several of these historical images are again juxtaposed with contemporary ‘repeat photographs’ taken as part of the Mountain Legacy Project, documenting notable changes to these alpine landscapes over the past century. In addition, for the first time, Sherwood includes reproductions of several of the map sheets published by the Inter-Provincial Boundary Commission—key outputs from the surveys that reveal the conceptual gap that lies between the often-chaotic vicissitudes of field work and the polished and placid cartography that resulted.

Alas, some familiar shortcomings from the previous volume resurface here.  Like its predecessor, this work is long on detail and short on context, particularly with respect to the broader political and economic motivations driving these surveys in the post-war period.  Sherwood does briefly touch on these wider issues in places, but the narrative remains tightly fixed on the trials and tribulations of field work throughout.  Such a circumscribed focus calls out for a series of large-scale reference maps, tracing the peripatetic journeys made by the various survey parties each season.  Unfortunately, while the reproduced map sheets provide some welcome geographical context, they are rendered too small to be fully utilized as a reference for tracing these movements.  Still, Sherwood has certainly produced a worthy successor to Surveying the Great Divide, once again delivering a comprehensive account of the demanding field work required to etch the “longest interprovincial boundary in Canada” (13) into some of this country’s most intractable terrain.