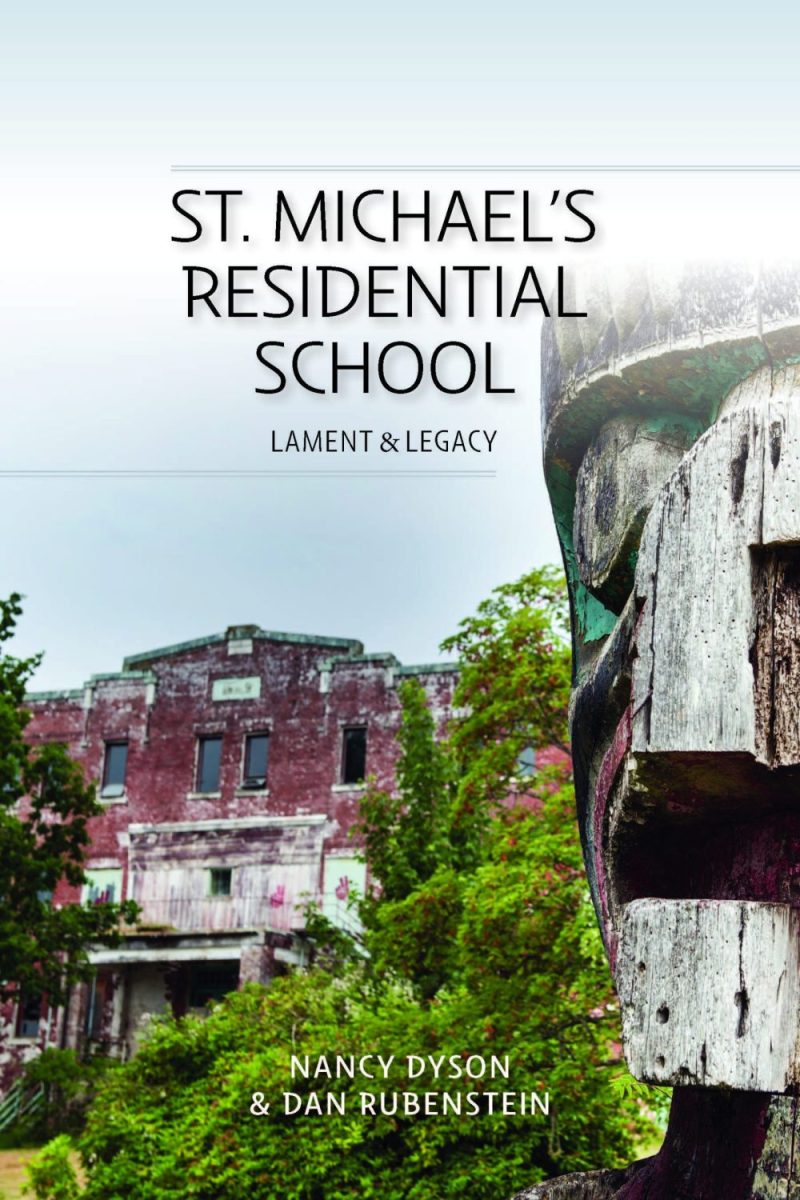 By Nancy Dyson and Dan Rubenstein

According to authors Nancy Dyson and Dan Rubenstein, they were encouraged to share their story of working at the Alert Bay Student Residence (formerly St. Michael’s Indian Residential School) by Chief Robert Joseph of Reconciliation Canada: “You must tell your story. Tell what you witnessed so no one can deny what happened. This is so important to the survivors.” (174) The authors worked at this institution in Alert Bay, British Columbia for four months and their story reflects their lives during that time. When reading their narrative, it is important to note that it consists of their “recollections; the dialogue, based on memory, is not a word-for-word account but captures the essence of conversations we had at the time.” (xi) Readers must keep this front of mind.

Their story of arriving in Alert Bay in 1970 is presented first by Dyson, who chronicles joining a system of child incarceration as young adults – childcare workers – while seemingly ignoring warnings from others. (xi-164) Throughout, she highlights how little she and Rubenstein, both American expats, knew about the Indian Residential Schooling system in Canada. She expresses concern and surprise at the coercive intake measures of stripping children naked for delousing and cleaning, at the poor quality of food given to Indigenous children, at the violent punishments that were inflicted on students, and at the Federal Government of Canada for being a key architect of this genocidal system, with Christian Churches at their side. Dyson also provides glimpses of Haitzaqv culture, writing about the rising of a totem pole and potlatch celebrations, noting that “the people looked proud; the children looked proud.” ( 51) That is juxtaposed by the carceral and violent environment of St. Michael’s Indian Residential School (locals continued to use its former name) and discussion of how students and their parents responded to it, including a young boy who attempted to take his own life (104) and a parent who removed his daughters from the institution during an unauthorized nighttime visit. (117)

It is not until the final pages of the book that Rubenstein makes his offering. Rather than providing memoir-style narrative, he grapples with the present-day context of Truth and Reconciliation. Rubenstein admits that he “rarely” ( 167) thought about the local Indigenous children after his four months at the Alert Bay Student Residence and affirms that his contemporary wonderings and questions about the system was a result of the work of the Truth and Reconciliation Commission of Canada (TRC).

There are troubling aspects to the narrative, including that Rubenstein prioritized his desire to obtain landed immigrant papers ( 114) over intervening for the safety of children. Dyson writes with more passion and consideration towards her newly adopted puppy (87-90) than of helping Indigenous girls who were coerced into local prostitution to meet basic needs. (105) Finally, Rubenstein lists one of his three “unresolved” questions as: “were there any voices of protest, voices of dissent, when the residential schools were in operation?” (176) On many occasions, according to Dyson, she and Rubenstein encountered locals who spoke out and provided warnings about St. Michael’s Indian Residential School, including visits with former students of the residential school who still lived in Alert Bay (73-80). This oversight calls the credibility of Dyson’s narrative into question.

The authors close many chapters with excerpts from the Final Report of the TRC. I appreciate Dyson and Rubenstein including the words of the TRC, which not only highlights the ongoing importance of that work but also the need for more Canadians to read the report. I had also hoped, though, that the voices of local Hailzaqv Elders and Survivors would have been highlighted in a robust way.

There are not many books of this style: Canadians have not heard about the experiences of the administrators, missionaries, teachers, Indian Agents, policing staff, and others who were responsible for forcibly removing Indigenous children away from their families and Lands, imposing harmful policies, and running the institutions themselves. There is a need for this work to be conducted in a way that is ethical, community-engaged, and centres the voices of Indian Residential School Survivors and intergenerational Survivors. In this regard, this book leaves much to be desired.