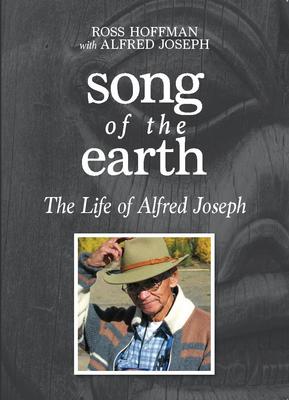 By Ross Hoffman and Alfred Joseph 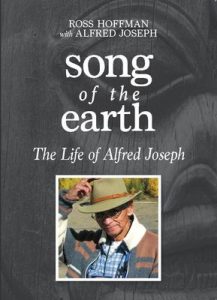 Song of the Earth tells the story of Alfred Joseph, the Witsuwit’en hereditary chief and lead plaintiff in the landmark Delgamuukw-Gisday wa court case that first articulated the doctrine of Aboriginal title in Canada. Joseph grew up on the Hagwilget reserve in the 1930s, was an itinerant industrial labourer in the 1940s and 1950s, participated in the Witsuwit’en cultural and political resurgence of the 1960s and 1970s, and became the lead Witsuwit’en litigant in the most significant Indigenous rights case of the 1980s and 1990s.

Ross Hoffman wrote Song of the Earth in collaboration with Joseph. Seventeen interviews conducted with Joseph provide the foundation of the narrative, supplemented by quotes from court testimony. The book’s thematic organization and tone echo George Manuel’s autobiography The Fourth World (1974), written in collaboration with Michael Posluns. However, where Posluns disappears as a ghostwriter, Song of the Earth relies heavily on direct quotes to maintain the distinction between Joseph and Hoffman’s voices.

The book emphasizes the importance of Joseph’s formative relationships to his grandmother, Cecilia George, highlighting Witsuwit’en self-sufficiency in Joseph’s early years. His grandmother maintained a trapline and regularly attended traditional governance feasts, and the community provided for its dietary needs through fishing in the canyon.

In the 1940s and 1950s, Joseph moved around finding work in sawmills and construction trades. This account complements Henry Pennier’s (2006) autobiography of his experiences as a logger. It also reinforces the often-under-recognized Indigenous involvement in the early industrial workforce.

In the late 1950s and early 1960s, Indigenous communities were decimated by a series of changes. Song of the Earth attests to the devastating impacts of expanded clearcutting and the 1959 destruction of the fishing sites in the Hagwilget canyon. Joseph stresses the turmoil enveloping the Witsuwit’en, as increasing numbers of community members descended into alcoholism and lost their children to the expanding foster care system.

However, in framing the expanding problems of Indigenous alcoholism, Hoffman over-emphasizes the importance of changes to the Indian Act and understates the effect of broader economic and environmental changes. The modernization of industries radically increased the productivity of labour, reducing the demand for low-skilled Indigenous labour while undermining Indigenous sustenance economies. As I document in Shared Histories (2018), provincial and federal policies systematically impoverished the Witsuwit’en, leading to increasing dependency and alcoholism.

This marginalization seeded an Indigenous cultural and political resurgence. While historians often focus on political events in the 1970s, Joseph and Hoffman highlight the 1960s resurgence of Northwest Indigenous art that presaged the subsequent political resurgence. They also clarify the distinct roles of hereditary and band authorities. Whereas bands provide federally-funded services on reserve, hereditary chiefs have jurisdiction over traditional territories. This remains pertinent as pipeline companies have been signing agreements with band governments instead of hereditary chiefs (see McCreary and Budhwa 2019).

Joseph’s political engagements culminate in the Delgamuukw-Gisday wa case, in which the Witsuwit’en hereditary chiefs joined their Gitxsan neighbours to claim to territorial jurisdiction and ownership in the courts. Hereditary chiefs took to the stand to explain their relationships to the land, and Hoffman highlights Joseph’s strength on the stand. While the trial judge dismissed the claim, the Supreme Court of Canada overturned that decision, ruling that Indigenous oral history needed to be considered. Although the mistreatment of hereditary chiefs’ evidence necessitated a retrial, the Delgamuukw-Gisday wa case provided the foundation for the declaration of Aboriginal title in the Tsilhqot’in Nation decision in 2014.

Song of the Earth provides an account of the public life of one of the most important Indigenous leaders of the twentieth century. The narrative helps personalize the existing anthropological literature on Witsuwit’en governance, such as Antonia Mill’s Eagle Down Is Our Law (1994) and Richard Daly’s Our Box Was Full (2004). Joseph’s biography documents how Indigenous life changed over the last century; but it also showcases how Joseph contributed to altering British Columbian and Canadian political realities.

Daly, R., 2005. Our Box Was Full: An Ethnography for the Delgamuukw Plaintiffs. UBC Press.

McCreary, T.& R. Budhwa. 2019. At the Core of the Wet’suwet’en Conflict: How, Ultimately, Should Resource Development Be Governed? Globe and Mail, January 9.