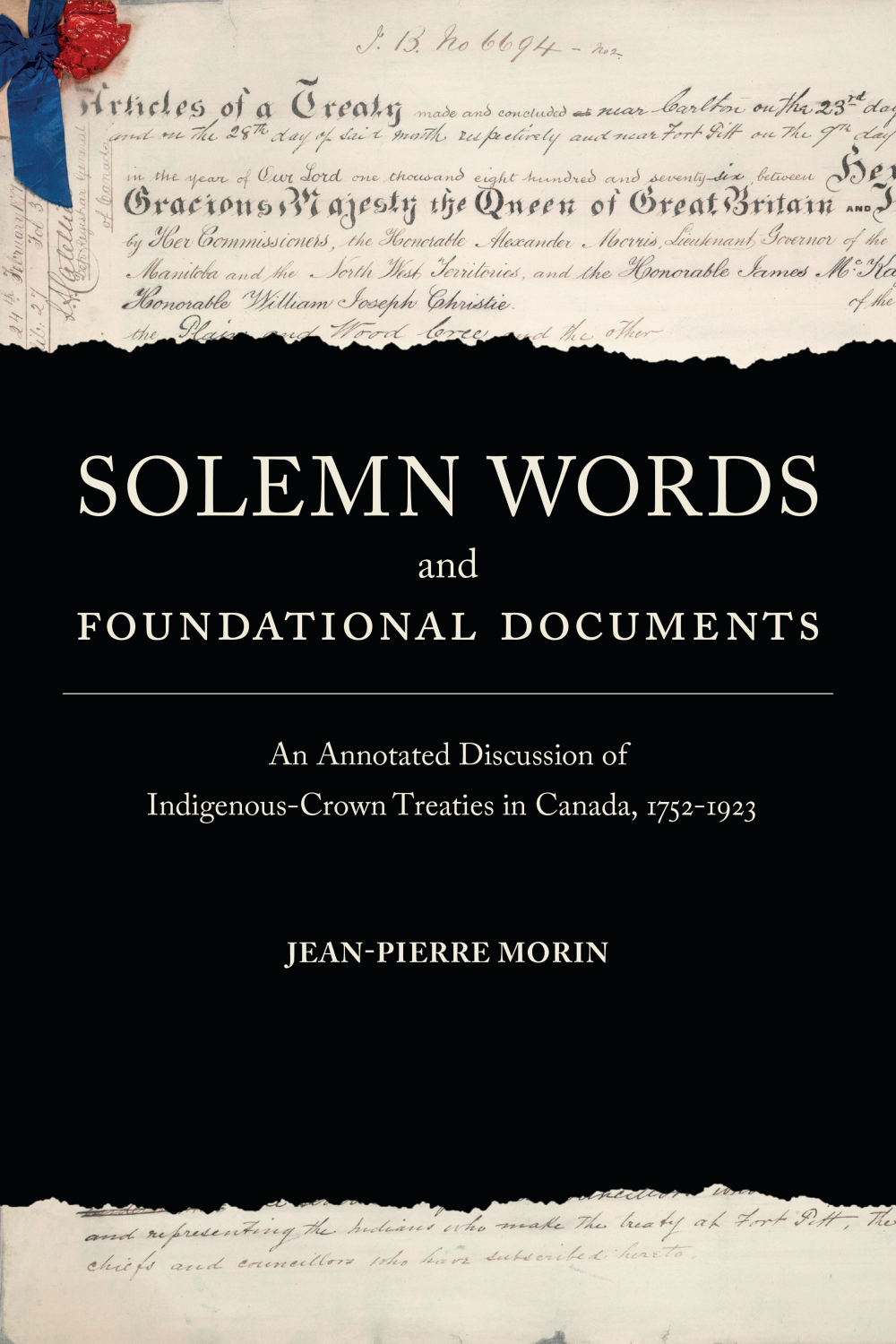 Solemn Words and Foundational Documents: An Annotated Discussion of Indigenous-Crown Treaties in Canada, 1752-1923

When the Indian Residential Schools Truth and Reconciliation Commission released its final report in 2015 it drew attention to the importance of treaty making in the history of Crown-Indigenous relations in Canada. Treaty making, the report stated, “established the legal and constitutional foundations of this country” (2015:33). Many Canadians are unaware of the meaning and importance of treaties. In Solemn Words and Foundational Documents Jean-Pierre Morin sets out to address this gap in knowledge. He does so while showing that no understanding of the spirit and intent of treaties is possible without reading across Indigenous and non-Indigenous accounts of their creation.

The eight chapters of the book each focus on one treaty representing a stage of treaty making in Canada between 1752 and 1923. Morin provides an historical overview covering the circumstances leading to the making of the treaty, the differences in the written accounts and Indigenous oral history accounts of the meaning of the treaty, and a discussion of how the treaty has been challenged in court. Each treaty discussed by Morin has been the focus of important legal decisions on treaty interpretation. This is followed by excerpts from the text of the treaty, a published or archived oral history of it, a settler written account of its negotiation, and excerpts from court rulings.  This format is pedagogically effective and a main asset of this book. The chapters also include biographical information, archival images and maps, and discussion questions.

The book begins with a Peace and Friendship treaty made by Chief John Baptiste Cope, of the Shubenacadie Mi’kmaq, and Nova Scotia Governor Peregrine Hopson, in 1752. In a 1985 ruling on the Cope Treaty Supreme Court Justice Brian Dickson gave one of the first judgments in favour a liberal interpretation of treaties beyond the legal language preserved in the written text. Chapter 2 focuses on the Huron-British Treaty of 1760, also known as the Murray treaty. Chapters 3 and 4 examine the making of the Rice Lake Treaty of 1818 and the Robinson-Huron Treaty of 1850. Both are pre-confederation treaties made in Upper Canada in the midst of growing settlement and desire for land on the part of settlers and governments alike. Readers from British Columbia will be interested in Morin’s discussion of the Saanich treaties in Chapter 5. These treaties were made by Governor James Douglas and the WSÀNEC in 1852 and are a good illustration of how differently treaty terms can be understood. In WSÀNEC oral history the treaties represent James Douglas’ word that their way of life would not be disturbed. Federal and provincial governments, however, have taken the Saanich treaties as unequivocal land surrenders. In the remaining chapters Morin covers Treaty 6, Treaty 8, and the 1923 Williams Treaties. The last of the historic treaties, the Williams Treaties were made to fill gaps left in the patchwork of pre-confederation treaties in Ontario.

This book would be an excellent teaching resource in university and college courses in a range of disciplines. Non-academic readers will appreciate the book’s accessible language and the way it brings together different sources to promote a holistic reading of each treaty. The book does not cover the modern treaty-making period that began after 1973. Readers interested in modern treaties and their implementation will nevertheless find this a useful addition to literature on the spirit and intent of treaty relationships.