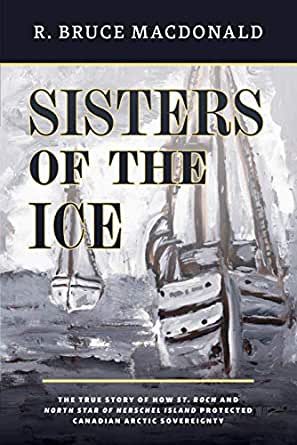 Sisters of the Ice: The True Story of How St. Roch and North Star of Herschel Island Protected Canadian Arctic Sovereignty

The polar north continues to have an enduring fascination for geopoliticians, tourists and mariners. Readers of history and other disciplines attracted to this subject abound. The navigation and search for a Northwest Passage is one of the all-embracing motifs of the Canadian national historical icon. The true irony is that although Canadian achievements have been grand and celebrated, the economic benefits are few and far between, the administrative costs gigantic. This all began centuries ago. In 1576, just before Francis Drake was heading for Pacific Ocean corsairing, Sir Martin Frobisher, backed by Elizabeth Regina, set out to find a Northwest Passage but ended up finding something quite different and altogether alarming – “fool’s gold,” or iron pyrites. Alchemists and refiners of the day worked diligently to “find” gold from the rubble brought home to Deptford on the Thames River from Baffin Island. “All is not gold that glitters,” however. Frobisher’s trio of voyages to the high Arctic wastes ruined many a financier and, by the way, discredited many an investor and prospector of trade. The Hudson’s Bay Company followed a century later, and Vitus Bering mapped the Siberian Arctic for his Russian employers, seeking the “great lone land,” Alaska. James Cook followed for the British Admiralty; he laid open, by way of Bering Sea, the high Alaskan shore as east as Icy Cape. In short, it took three centuries to disclose the desperately difficult geography of these northern polar seas and a then impassable passage. Canada’s attempt to defend its interest in claims to control the Passage within its 200-mile sea limit has never been properly backed up with coastal surveillance, instruments of sea power, and bases of operation. American and Chinese-flagged vessels transit at will, while Canadian icebreakers agreeably open up passages for cruise ships transiting the shallow and icebound wastes of these high latitudes.

Two vessels of imperishable importance survive from early days of Canadian Arctic endeavours. One, the famed RCMP vessel St. Roch, was the first vessel through the Northwest Passage west to east, the first vessel to navigate the Passage in both directions, and the first vessel to circumnavigate North America. Arctic achievements, we note amusingly, are defined by “firsts.” The second is the North Star of Herschel Island, described as the ultimate ice vessel to transport furs, supplies and people between remote Banks Island and the mainland. The theme of this insightful and engaging book is how these two vessels protected Canadian Arctic sovereignty. The author’s sprightly narrative and new photographs tell of the perils and the prospects of Canada’s northern destiny. The story begins on Herschel Island, about five miles off the Yukon coast. There, whalers, who had been hunting the bowhead whale for blubber oil, arrived in August to winter and they promoted a local economy with the male and female inhabitants (mainly Inuvialuit). In 1903 the Mounties arrived to provide a guardian watch. The narrative moves to the Karluk expedition and Viljjalmur Stefansson’s leadership in the Canada-sponsored Arctic expedition of 1913 to secure Canada’s sovereignty against United States preemption (also to promote scientific inquiries). The author does not mention it, but in advance Sir Robert Borden, the Prime Minister of Canada, required Stefansson to take an oath of allegiance to the British crown to ensure that any discoveries and claims he made in the right of Canada were not, in fact, done by an American citizen! That expedition ended in much acrimony. The Mounties took up the cause in the St. Roch, and again it is fascinating to see that another of Scandinavian extraction is involved in an essentially Canadian story, Norwegian-born Henry Larsen.

Author Macdonald fell in love with the North Star of Herschel Island. Like the St. Roch, this vessel had established a permanent Canadian presence on Banks Island. R. Bruce Macdonald acquired the vessel twenty-five years ago. His book demonstrates his affection for voyaging in icy seas and defending Canada’s sovereignty. Just as the St. Roch had been pressed into service “to maintain the right” during the Second World War so had North Star of Herschel Island been important in defending the Canadian high Arctic sovereignty against the Soviet Union during the Cold War. Showing the flag, in this telling, sufficed.

The author tells his tales with devotion and compassion, and the narrative is rich with illustrations (including Marilyn Monroe in a white fox fur stole and muff, also an Inuvialuit dogsled lashed to the roof of a pilothouse). Notes, bibliography, and index complete this testament to a world worth recalling in our history though fading from view. The two vessels, old Arctic friends, came in sight of each other in 2013 in Vancouver. St. Roch is preserved ashore in the Vancouver Maritime Museum; North Star of Herschel Island is moored at their Heritage Harbour Marina. Each holds a notable place in world maritime history.