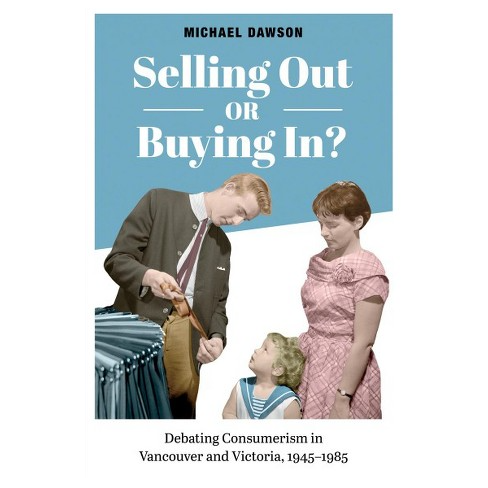 Selling Out or Buying In? Debating Consumerism in Vancouver and Victoria, 1945-1985

Today we live in a consumer-oriented culture in which material items help to define who we are, or, who we want to be. To meet our material needs, stores are now open seven days a week, often from 10:00 in the morning until 9:00 at night. But this was not always the case. Canadian historians have identified the post-war period as the time when a seismic shift took place, moving us away from decades of scarcity and an ethic of ‘making do’ to a modern consumer society in which there is a perpetual cycle of acquiring — often on credit — and disposing. This cultural shift caught the eye of the French cultural theorist Jean Baudrillard who has argued that we live in the prison house of consumption with all that the term implies concerning group integration and social control.

Taking a thematic approach, Dawson’s book explores “the consolidation of Canada’s consumer society by focusing on how people in two BC cities responded to, and debated, initiatives designed to dramatically increase consumers’ access to goods and services” (10). Following the lead of the University of Wisconsin historian, Mary Louise Robert, Dawson argues that there was nothing natural or inevitable about the emergence of modern consumer practices. At a time before online shopping and internet purchases, consumerism was based largely on customers walking into stores to buy “stuff.” Until the late 1950s residents of Vancouver and Victoria negotiated a shopping landscape that would be unrecognizable to us today, with most stores being closed for at least half the day on Wednesdays, shut most evenings, and closed all day on Sunday.

The question that occupied and divided British Columbians in Vancouver and Victoria, between 1945 and 1985, was how far should society go to meet the consumer’s material desires and needs? On one side of the debate were those who argued for a liberalizing of the consumer experience. The more opportunities for consumption, they argued, the better. Vancouver boosters, for example, argued that mid-week closing “was costing local merchants much-need revenue and was giving tourists the impression that the city was not interested in their business (37).  Others in this camp argued that more sales meant more profits for individual firms, greater macroeconomic growth and more satisfied customers.

On the other side of the debate were those who argued for limited shopping hours in order to protect their economic interests or way of life. For this later group, extending store hours was “less about ‘buying in’ to Canada’s consumer society than it was about ‘selling out’ an older life style that offered a welcome balance between work and leisure” (10).

Dawson notes however that this was not a straightforward story about big business against the small local merchant. Within each camp there were divergent interests, multiple identities and many voices. Contrary to popular perceptions and populist rhetoric, the externally-owned and -controlled chain stores were not all in agreement about the need to deregulate store hours. For example, the department store chain, Woodworth’s Stores Ltd., was against extending the shopping week to six days in 1954 “because we believe in the 5-day week for our employees and guarantee it by staying closed one full day each week in all of our stores” (65). Cold War ideology imbued the debate with competing notions of citizenship, democracy and free enterprise. Thus, Dawson concludes that store-hour deregulation was ultimately “a product not just of monopoly capitalism but of intricate strategies and alliances within local communities” (151).

Unlike Baudrillard, Dawson is optimistic about our own agency to break out of the prison house of consumerism based on the fact that “those who came before us did not passively stand aside as consumer society developed… The fact that people debated consumerism in the past ought to encourage us to continue asking hard questions about it today in and in future” (150). All this reviewer can say is: Amen.