Sailing with Vancouver: A Modern Sea Dog, Antique Charts and a Voyage Through Time 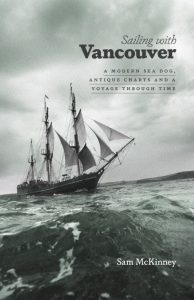 While Vancouver entered the Northwest with two deep-sea sailing ships and more than 200 men, McKinney has only a small sailboat, with himself as crew. He purchased the sailboat, Kea, a twenty-five foot Vertue, at age seventy, and decided to retrace Vancouver’s voyage as both a personal challenge and a means of exploring the region’s past.McKinney opens the book at the mouth of Juan de Fuca Strait, sails to the head of Puget Sound, turns north and threads through the San Juan Islands, then follows the Gulf of Georgia and the Inside Passage to Cape Caution, at the northern end of Queen Charlotte Strait. Along the way, McKinney quotes from journals kept by the expedition’s crew, sketches the Northwest’s alongshore history, and describes contemporary anchorages with an essayist’s eye, ultimately taking us on a nautical journey through space and time.

The book’s strongest points are when McKinney directly shadows Vancouver, as when he follows Vancouver’s course past the Fraser River’s mouth to understand why Vancouver missed it. (The river’s wide delta effectively hides it from an observer a few miles out to sea.) When McKinney follows the expedition through the narrow channels separating Gulf of Georgia from Queen Charlotte Strait, he finds that his modern charts and tide tables make the tidal currents no less daunting. These moments fill the narrative’s sails like gusts of wind. At other points, though, as when McKinney recites a list of points along his voyage, the book tends to flag.

McKinney sails in the wake of other literary mariners. Jonathan Raban also follows part of Vancouver’s route in Passage to Juneau (1999), his Inside Passage travelogue, and M. Wylie Blanchet references Vancouver in The Curve of Time  (1961), an account of her family’s summer voyages through coastal British Columbia. Unlike these works, McKinney focuses tightly on Vancouver’s route, and his narrative is correspondingly shorter – less than 200pages– making Sailing with Vancouverwell-adapted to classroom use.

But for all his careful attention to Northwest waters, McKinney largely ignores the region’s indigenous peoples. For much of the narrative, the only natives are the ones McKinney reads about in Vancouver’s logbooks; contemporarynative people first appear more than a third of the way through the book, when McKinney buys seafood from Squaxins near his home marina. The afterword, a list of Northwest coastal place names, is a missed opportunity to discuss the politics of naming, memory, and recognition. Readers would benefit from pairing McKinney’s slim book with Joshua Reid’s far more expansive The Sea is My Country (2015), a maritime history of the Makahs, or with Coll Thrush’s palimpsest approach to cultural geography in Native Seattle (2007).

The book’s several maps, by Les Hopkins, would be more helpful if they included McKinney’s or Vancouver’s routes– or even additional detail. Instead, the reader is often left searching for place names mentioned in the narrative that do not appear on the maps. Elsewhere, a few small errors of historical fact distract from McKinney’s narrative, and some nautical terminology may confuse landlubbers.

On the whole, though, McKinney has written a compact, accessible introduction to the historical and present-day maritime Pacific Northwest, one that will be equally interesting to scholars, recreational boaters, and armchair explorers. Although McKinney sailed alone, his lively account brings readers along for the ride.

Reid, Joshua. 2015. The Sea is My Country: The Maritime World of the Makahs, an Indigenous Borderlands People. New Haven: Yale University Press.

Sailing with Vancouver: A Modern Sea Dog, Antique Charts and a Voyage Through Time