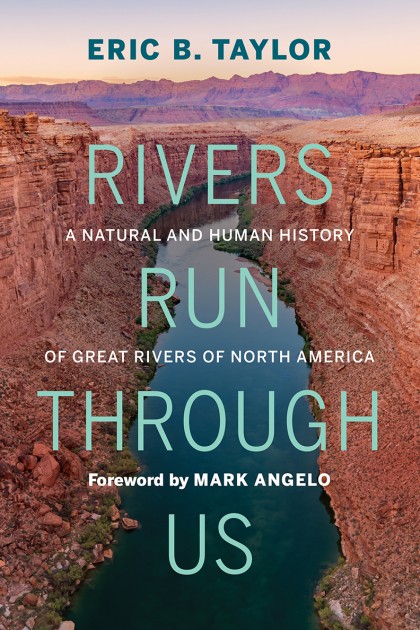 Rivers Run Through Us: A Natural and Human History of Great Rivers of North America

By Eric B. Taylor

Eric B. Taylor’s Rivers Run Through Us: A Natural and Human History of Great Rivers of North America is a synthetic survey of ten waterways. In these fluid vignettes, the author covers the foundational importance of rivers to North American history, and also how we have engaged with and exploited these rivers. Balancing hope and declension, science and society, Taylor wants to make us know and care about these rivers so that we will do right by them.

Each of the ten rivers receives their own focused chapter, with the book generally moving from west to east. The author states at the beginning that each of these chapters has a one-issue focus, such as fish, art, or irrigation (though that one-issue focus begins to break down as an organizing principle in the latter half of the book). Seven of the ten rivers covered are in western North America (Mackenzie, Yukon, Fraser, Columbia, Sacramento-San Joaquin, Colorado, Rio Grande), with the Mississippi, Hudson, and St. Lawrence the other three. That will likely suit readers of this journal, but it is a curious choice that leaves the book feeling uneven (especially considering that over 90 percent of North American surface freshwater is in the eastern half of the continent).

In addition to chapters on each of the ten rivers, there is an introduction, a brief chapter succinctly summarizing the geology and morphology of North American rivers systems (the “family” of North American rivers), and then a conclusion which constitutes a lengthy meditation on the future of North American rivers. Most chapters begin with a natural history, and then shift to the human history. The natural history sections are nice summaries addressing the relevant geomorphology and aquatic science. The human history side combines water history and politics, more or less employing an environmental history approach. Unlike many other popular-facing books on water or river history, the author has gone further than just superficially dipping their toe into the academic literature (though there are still some curious omissions in terms of scholarship).

At the same time, the human history parts are, while not weak, fairly derivative: i.e., rather than original research, Taylor’s narrative mainly summarizes a few of the books that have already been written on each of the respective waterbodies. The author is at his strongest when discussing scientific aspects, such as salmon, reflecting the author’s background as a fish biologist. There are pearls of wisdom in the lengthy conclusion, which looks to the future and considers the impact of climate change, amongst other factors.

Rivers Run Through Us would probably be most useful for Canadian, especially western Canadian, readers seeking an introduction to continental river histories and contemporary water issues. The primary audience is likely readers of water books by the likes of Maude Barlow, Robert Sandford, and Roy MacGregor. This will particularly appeal to those who want more scientific erudition and technical detail than is usually offered in books aimed at the general or learned public.