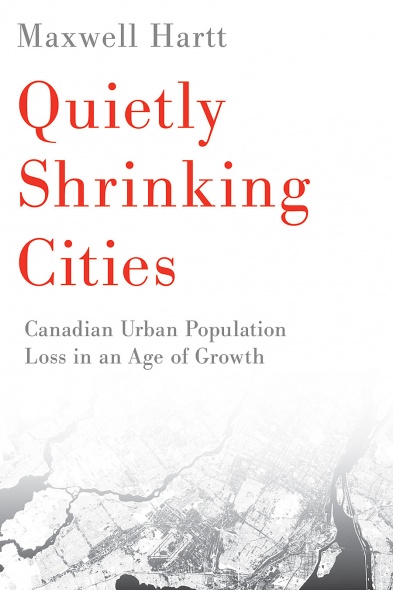 Growth is good and small is beautiful. These two mid-twentieth century mottos continue to influence thinking about cities. On balance, Queen’s University geographer Maxwell Hartt would say that the former continues to hold sway more than the latter.

Something like a hundred small-to-large centres in Canada are shrinking. From Montreal to Corner Brook to Prince George and in many, many places in between, the arc of post-WWII growth has long since reversed. Hartt explores the broad outlines of this phenomenon and searches for some of its causes, which include de-industrialization, globalization, and the rise of the tertiary economy in major centres. Mainly, however, he is concerned with how shrinkage is addressed. His approach includes a close examination of two communities to see what they reveal of forces driving declining numbers and the responses mounted by their respective local governments. Chatham-Kent in southwestern Ontario has only a recent history of decline but one that looks to be structurally entrenched with an aging population, fewer well-paying jobs, and a locational burden that puts it too close to Windsor and too far from Toronto. Still, locals in southwestern Ontario remain of a mind that this is just a setback, one from which they will recover. Cape Breton Regional Municipality (CBRM), on the other hand, has wrestled with decline for far longer – sixty years – and there is greater acceptance of the trend, although blame is passed around liberally. Both regions recognize the benefits of right-sizing, consolidating services, and so on but the politics of doing so are far less attractive than playing for time, Ottawa-bashing, and going after a splashy grant. (147)

But what a difference a pandemic makes! In December 2021 it was announced that the population of Nova Scotia had reached the one million mark, putting it within striking distance of Saskatchewan for the first time in a century. While Hartt identifies the magnetic pull of major centres (he calls it “parasitic”), he could hardly have anticipated the widespread ‘discovery’ of working remotely. He might, however, have predicted the exodus from centres like Toronto of (a) those who cannot afford the housing market and (b) those who have cashed out at a huge profit. (17)  Indeed, unofficial numbers suggest that both CBRM and Chatham-Kent have actually experienced some growth over the course of the Coronavirus crisis. What’s more, robust growing cities took a hit last year: Vancouver actually declined by 1%. Is this the start of a long-term trend? Too early to say and it does not matter to the argument that Hartt is making: many centres in Canada are shrinking and it creates a kind of existential – not to mention fiscal – crisis.

Hartt makes the very good point that our civilization is so addicted to growth that even the suggestion of plateauing – let alone shrinkage – draws a cold stare from urban elites. In a growth-oriented culture a population change of -3% or more is cause for alarm and allusions to slippery slopes. No surprise, then, that officials in Chatham-Kent were overjoyed when preliminary census numbers at the end of 2021 hinted at the return of growth. Forget ‘right-sizing’: they’re opening a new 400-house subdivision near Highway 401 to facilitate commuters headed to Toronto.[1] Awaiting a rebound, they committed little energy to the question of shrinkage management.

Which is too bad, because as Hartt says “we need not only to accept shrinkage but also to view it as an opportunity for positive growth,” providing we appreciate that “growth” in terms of economic activity and quality of life can occur without growth in population. (112)

More than that, there is the question of whether cities can be refashioned to be sustainable. An aspect of shrinkage that gets no serious attention in this study is climate change. You want an example of a shrinking population? Take Lytton, BC. An ancient community, Kumsheen/Camchin/Lytton has existed in some form or another for many hundreds of years. It had a population of about 250 in 2016; it now has a population of effectively nil, because every structure within the village boundaries was incinerated by a wildfire. CBRM has experienced decline of a few percentage points annually for decades; Lytton experienced shrinkage of 100% literally overnight. The fact that Chatham-Kent developers are chomping at the bit to open another automobile-dependent subdivision is only slightly less mad than proposing a new coalmine in Cape Breton. Indeed, many of the processes discussed in this volume of urbanization, suburbanization, de-urbanization, and re-urbanization, not to forget shrinkage, have to do with an economic and social/spatial order constructed on automobilism. (26-7) These two communities, I should not have to underline, were built on a bedrock of fossil fuels. Shrinkage and consolidation, then, might create opportunities to address carbon footprints at a decent scale.

On the whole this is a well written, companionable study. Some of the American comparators seem, however, to be a stretch. Even before I realized that Hartt spent time at the University of Wales, I was wondering why he did not explore the post-coal cities of the valleys of South Wales. Pontypridd had a population close to 50,000 not long before Tom Jones was born there and now it is home to barely 31,000. Thatcher-era mine closures and distance from this ‘periphery’ town to the national centre were perhaps mitigated by devolution but bitterness toward external elites manifested in strong anti-EU feeling during the Brexit vote. To my mind, this invites comparisons with Cape Breton.

This book offers lessons going forward, and not just for currently shrinking cities. Bad design hardwires problems into cities for subsequent generations to resolve. Prince George is hardly smaller than Winnipeg in terms of km2 (318 and 464 km2 respectively) and Calgary (825 km2) is vastly larger than both and spectacularly larger than Toronto (630 km2). But CBRM – at 2,434 km2 – dwarfs them all. Think of the differences in terms of density. Rightsizing over an enormous landscape of subdivisions and villages will only look like the worst kind of austerity: metropolitan planners need to consider that horizon.

For the rest of us, living in growing or at least mostly stable centres, what do we need to worry about? Answer: Scary national political movements. As Hartt says, “Residents in these so-called ‘loser-cities’ are fed up and letting the world know it by supporting populist, at times anti-urban, political candidates.”(148) It goes beyond the scope of Quietly Shrinking Cities but insights like this alert us to the possibility that urban shrinkage most often means that someone is being squeezed and that creates conditions that foster mistrust of democratic and other institutions. When a city declines, we all ought to be interested in how that will play out.