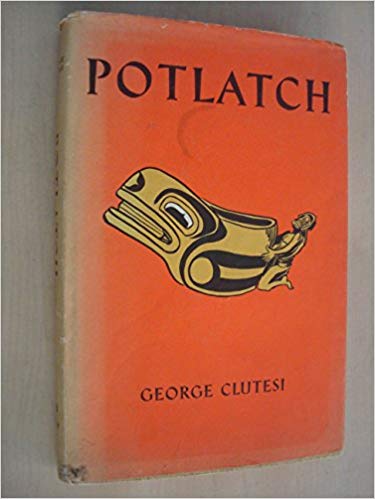 George Clutesi is a member of the Tse-shaht band of the Nootka Tribe of Vancouver Island. As a child he was sent to a church-operated residential school where he recalls that he was taught that his own culture was benighted, heathen, and inferior. His life since then has been given to a stubborn fight to restore, as much as possible, the Indian quality of  his people’s culture. To this end he has taught local youth to dance traditional dances and to sing the appropriate songs. He has painted pictures illustrating legends and themes of his culture, and he has won acclaim through his broadcasting of Nootka tales for children. Potlatch is his reconstruction of the emotional context and detail of the traditional ceremonial life of his people. The Nootka Dancing Society has one main theme that of Dlukwana, the wolf. In the winter months, the wolf spirits were supposed to abduct the children of the tribe and teach them the songs and dances which belong to their families by inheritance. The children were sponsored by relatives, who gave feasts and gifts in their honour. It is the drama of these days which George Clutesi sets out from his childhood memory of them.