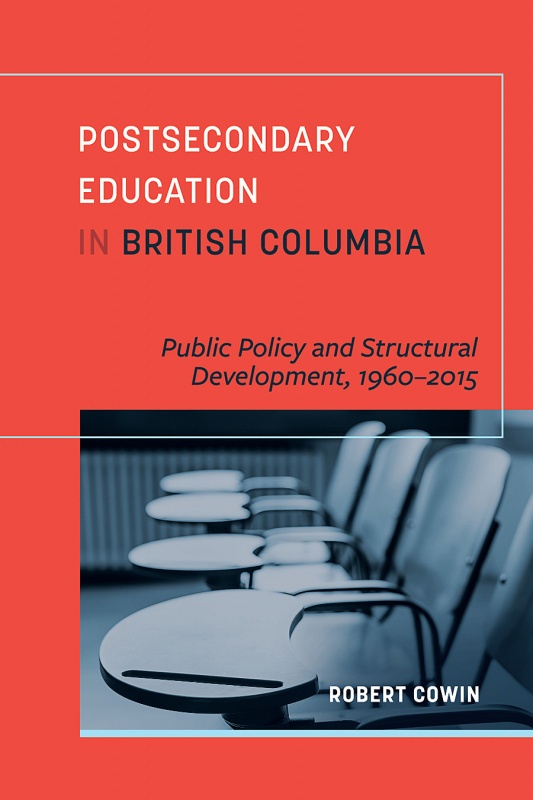 As distinct from previous historical accounts of postsecondary education in BC, Cowin makes it clear that he will cover the development of the “entire” postsecondary system in BC (3). For Cowin, this means the whole of both the public and private sectors as well as the apprenticeship system and continuing education. Using what the author describes as a systems approach, the reader is provided with a straightforward, if somewhat mechanical, partial history of postsecondary education. After setting the stage with a general historical account of the whole period, and a chapter on the three policy rationales the author uses for analysis, the 55 years is divided into three chronological periods: 1960-79; 1980-99 and 2000-15.

Cowin’s systems approach aims at providing “an integrative and dynamic analysis that concentrates on the interactions among postsecondary sectors (4). Three policy rationales (social justice, human capital formation and marketization) are used to analyze one or two significant historical moments in each of the three time-periods. For Cowin, “Historical moments are much shorter than periods, involve at least two postsecondary sectors, and mark disjunctions in development trajectories” (64). Cowin’s methodological approach is to integrate the academic literature with his own writing for professional audiences (eight historical reports) as well as his own observations and experiences over three decades in various positions at Douglas College.

The main body of the book consists of three substantive chapters that cover the three time periods mentioned above. In Chapter 3, Clear Intentions (1960-79), a single historical moment “The Macdonald Era” comes under the spotlight. Beginning with the Macdonald Report (1962) the author proceeds to trace its impact on all the postsecondary sectors through the 1960s and 1970s.

In Chapter 4, Assumptions Challenged (1980-99), two historical moments are the focus of attention. First, the contraction of public education in the early 1980s and the following shift in vocational education from the public to the private sector. Second, the establishment of a new type of postsecondary institution (university college) at the end of the 1980s. Chapter 5, Cynicism (2000-15), covers two historical moments. First is the “New Era” which covers the changing relations between the public and private postsecondary sectors during the years 2002-2006. The focus here is very much on government action following the election of the liberal government in 2001. Second is “Post-neoliberalism” which covers the move away from marketization in the period 2011-2015.

The Conclusion introduces four themes that “form a backdrop for any history of the contemporary BC postsecondary system” (162). Given this description, the positioning of these themes at the end of the book is somewhat disconcerting for the reader. The first three themes (Geographical Access, Federal Government, and Private Sector and Entrepreneurship) are predictable and central to the development of probably all federal, liberal democratic states. The fourth theme (Loss of a Shared Vision) is categorically different in that it is a more specific description of events in BC as compared with other provinces.

Cowin draws his historical account together in Table 5 (167) where he assesses the relevance of the three policy rationales for each of the historical moments. For Cowin, the key message that we should take from this table is that “human capital formation has been central to understanding the development of the postsecondary system in British Columbia. Social justice considerations were especially significant in the earlier decades, whereas market-oriented rationales strengthened in more recent ones” (168). The book ends with a plea for more work that utilizes a systems approach and thereby does not discriminate against the private sector or the technical/apprenticeship elements of postsecondary education.