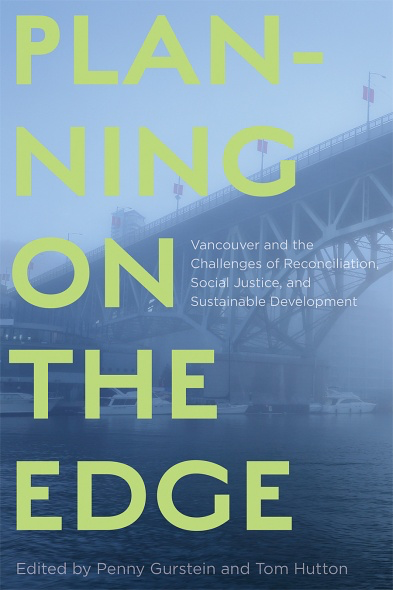 Planning on the Edge: Vancouver and the Challenges of Reconciliation, Social Justice and Sustainable Development

Planning on the Edge: Vancouver and the Challenges of Reconciliation, Social Justice, and Sustainable Development (2019) is a compelling edited collection written from an interdisciplinary perspective. The book treats the state of metropolitan Vancouver’s development as a unique, cosmopolitan Pacific rim cityscape poised between visions of sustainable, equitable urban regionalism and unsustainable inequalities beholden to unchecked building development and real estate speculation. According to University of British Columbia regional planning scholars Penny Gurstein and Tom Hutton, the purpose of the volume is to “offer a constructively critical and balanced perspective on Vancouver’s development record, with an emphasis on aspects of growth and change since the 1980s” (11).

In an incisive prologue written by the late and influential scholar of urban studies John Friedmann, the social importance of the work Planning on the Edge engages in is well laid out. As Friedman suggests, a critical consideration of Vancouver’s development future is crucial, since the metropolitan area is likely to reach a population that exceeds 4 million by the mid-21st Century, second only to Toronto as “Canada’s largest urban constellation” (3). Moreover, Friedmann notes from 2011 census data, that “half the families in places such as Vancouver and Langley have to manage their lives with an annual median income per person that falls below $22,000 for the first and $19,000 for the second” which for many is a life on the “edge of poverty” (6). Friedmann highlights “short-range ‘imperatives’ that have to be brought into balance within the overall planning frame, such as fully integrating – socially, economically, culturally – the hundreds of thousands of immigrants from abroad who will be arriving in the regional city in expectation of a better life, or serving the still unmet imperatives of social justice by reducing existing inequalities that range from First Nations’ claims to opening up new channels for social mobility via educational and other reforms specifically aimed at the younger generations” (8). In a city (and indeed metropolitan area) of increasingly unaffordable housing stocks which disproportionately impacts indigenous peoples and new immigrants, this reality is clearly unsustainable and does little to offset the ostensibly eco-friendly visions of civic boosters and promoters who have made it to Vancouver and Metro-Vancouver’s city halls in recent decades.

The book is divided into eleven chapters from a variety of contributors. These include Musqueam Nation leaders and researchers to social planners and scholars mainly associated with the University of British Columbia’s School of Community and Regional Planning. Topics covered in the volume include a section on “Situating Vancouver in Space and Time,” which features both indigenous and settler scholar perspectives on Vancouver’s distant and recent urban pasts. It also features an important middle section on “Sustainability and Resilience in Metro Vancouver’s Urban Systems” which features some helpful studies of transportation infrastructures, water management, and urban design and governance. A final section, entitled “A people-centered approach to planning and development in Vancouver,” offers excellent case studies for strategies that might address inequities in the city’s infamously poor Downtown Eastside neighborhood, as well as the promotion of housing and immigrant support policies that might lessen the burden placed on people forced into precarious livelihoods by the cost of living in metropolitan Vancouver. The book ends on a hopeful note with urban and indigenous studies scholar Leonie Sandercock’s epilogue. Sandercock focuses on the ways non-indigenous urban planners need to learn from indigenous leaders and thinkers about how best to decolonize and offer not only Vancouver, but Canada, a hopeful and sustainable future – a future not based on continuous development and profit for the few.

Planning on the Edge: Vancouver and the Challenges of Reconciliation, Social Justice and Sustainable Development. Vancouver: University of British Columbia Press, 2019. 352 pp. $99 cloth.