People of the Saltwater: An Ethnography of the Gitlax m’oon. 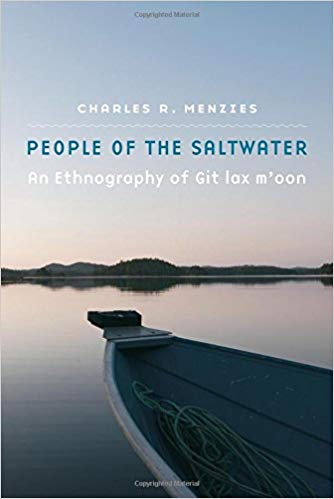 “Gitlax m’oon, people of the saltwater” are more commonly known as the Gitxaala; their principal village, Lach Klan is located on what is now called Dolphin Island, a little to the south of Prince Rupert. The Gitxaala are part of the Tsimshianic language family, but in People of the Saltwater, Charles Menzies stresses their distinctiveness: “Gitxaala people … have always understood ourselves to be a unique people” (14). As this comment suggests, the book is, in part, an account of a personal journey. Indeed, elsewhere Menzies describes his approach as “autoethnography,” stating that he “tells the story of the Gitxaala from a perspective situated within the Gitxaala world” (25).

The book includes a variety of descriptive accounts and recollections of life on the land and waters (with echoes of Hugh Brody’s Maps and Dreams), together with more abstract discussions of the underlying principles of the Gitxaala world – what it means to be Gitxaala. The first four chapters address Names, Governance (Smgigyet), Territory (Laxyuup), and History (Adaawk) and the linkages between these components. Menzies is concerned here with emphasizing the continuity in the Gitxaala world – both the time depth of occupancy (millennia) and the continuing relevance of “traditional” structures, procedures, and values, as well as the linkage between names and territory. Hence persistence is resistance – especially in a colonial context. History is important, but it is only treated episodically – the arrival of the K’amksiwah (white people), the imposition of reserves – and Menzies chastises some writers for their treatment of these topics, although not always accurately. There is a looseness in the treatment of historical documents, at least from an academic perspective. Both here and in the second part of the book, Menzies stresses the involvement of the community in gathering information about resources – frequently for disputes with government.

The latter half of the book concentrates on the changing relationships of the Gitxaala to various fisheries – salmon, herring, and abalone. In this section Menzies emphasizes the need for sustainability and the need for local/indigenous involvement in the management of these resources. At the same time, he makes the point that First Nations shape and have shaped their environments: Laxyuup (Gitxaala territory and waters) are not a pristine wilderness. There are similarities here to the growing recognition of the role of “cultivation” or management of various plant resources and the ingenuity and labour in producing clam gardens.

This is a relatively slim volume and there are issues that would have been interesting to see addressed – the impact of Christianity, education, the disappearance of the sea otter – but this would have required a different book. The current version, however, could have been better served cartographically; Susan Marsden’s exemplary 2011 map of Gitxaala territories, for example, would have been a valuable addition.

Menzies recognizes the importance of William Beynon (the “unsung hero” of Tsimshianic research), both to his own work and to the study of Tsimshianic peoples generally. There are also elements of similarity between Beynon and Menzies as ethnographers, each with a foot in two worlds. However, the latter has been shaped by, and participated in, a different environment: the revival of First Nations in Canada and the ongoing struggles for sovereignty, title, and reconciliation. This is a journey that has a long way to go, as the response to Canada 150 demonstrates. People of the Saltwater represents a contribution to that journey.

People of the Saltwater: An Ethnography of the Gitlax m’oon.
Charles Menzies
University of Nebraska Press: Lincoln and London, 2016. 198 pp. $45.00 cloth.