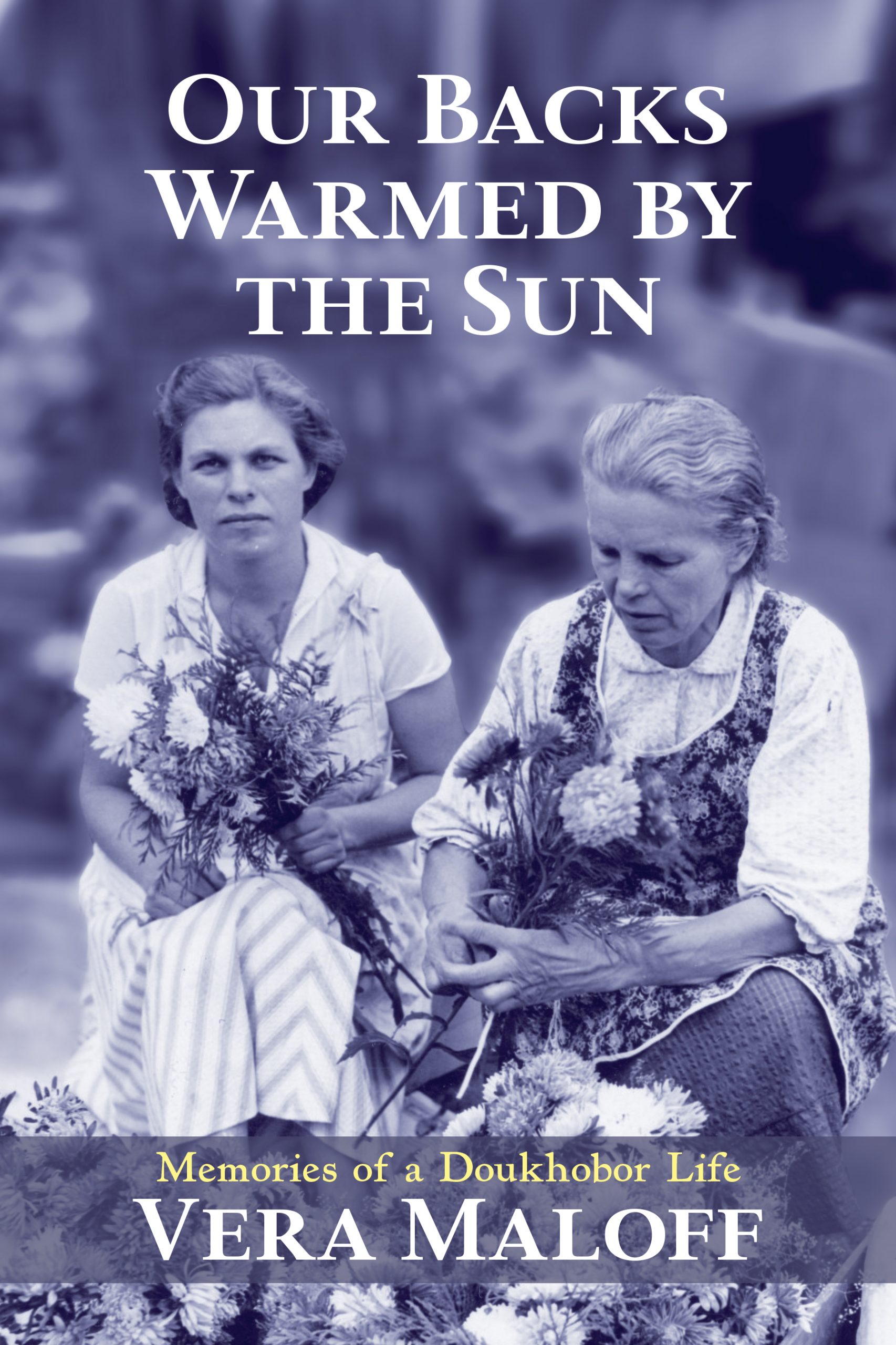 Our Backs Warmed By The Sun: Memories of a Doukhobor Life

In Our Backs Warmed By The Sun: Memories of a Doukhobor Life, Vera Maloff recounts the lives of several generations of the Maloff-Hoodicoff family who, for much of the previous century, farmed in Thrums, a community along the Kootenay River near Castlegar, British Columbia. Maloff relies primarily on the memories of her mother, Elizabeth (Leeza) Maloff, those of other members of her family, and on her own documentary research, to tell the story of a Doukhobor family from the migration of the great-grandparents from Russia to Canada in the 1890s to the lives of their descendants in the present. Maloff shows how important the women of the family, including her grandmothers, mother, and aunts, were to maintain a family dedicated to the Doukhobor spiritual vision of a simple life of toil on the land and a commitment to peace. In Our Backs Warmed By The Sun, we learn about the negative impact of the federal government’s opposition to peace activism on all the members of an individual Doukhobor family.

From the late 1920s to the end of the second world war, the state imprisoned for years at a time Maloff’s grandfather, Peter Maloff, for his participation in Doukhobor demonstrations against government policies that promoted militarism and for his refusal to register for wartime service under the 1940 National Resources Mobilisation Act. Maloff points out that not only her grandfather suffered while in prison and in exile but that his wife, Lucy (Lusha) Maloff, and their six children also suffered. They suffered from the long absences of their husband and father, and from the experience of internment in an abandoned logging camp by the federal government after they camped for three weeks in Nelson to protest Maloff’s initial arrest. In the early 1930s, the children suffered again when the federal government also imprisoned their mother on Piers Island for her own participation in Doukhobor demonstrations. With both parents in prison, officials apprehended their children, separated them, and sent them to the BC Girls’ Industrial school, to the Alexandra Orphanage, and to foster homes in the Lower Mainland. Of this suffering, Vera Maloff concludes, “…I have seen the toll on the family through the generations, a tension and anxiety we have all carried from childhood (64).”

Our Backs Warmed By The Sun includes a moving description of Doukhobor life in the West Kootenay from the late 1940s to the 1970s. Released by the federal government at the end of the war, Peter Maloff long remained an Independent Doukhobor. He rejected the tactics of the Sons of Freedom Doukhobors and, for a long period, the hierarchical structure of the Community Doukhobors. Unable to find work due the broader community’s negative perception of Maloff’s “radical” past, Peter and Lusha supported their family through market garden production on their two-hectare homestead. Beginning each spring, the family sold bedding plants, produce, and flowers in the parking lots of supermarkets and at weekly markets in Trail and Nelson. This family economy which relied on the labour of all its members, allowed the Maloffs to follow a Doukhobor life on the land. For the Maloffs, Doukhobor principles included public speaking and writing in support of peace, vegetarianism, and what, today, we would call organic farming and alternative health and healing practices. The Doukhobor belief in a common humanity also meant that the Maloff home was open to exiles from Russia, followers of alternative health practices from California, and, in the 1960s, American war resisters. Through all this, Vera Maloff makes clear that her mother and grandmother made sacrifices to support the family. Asked about these sacrifices, Maloff’s mother, Leeza, concluded: “Well, life could have been easier! (250)”

Our Backs Warmed By The Sun is a well-written and -illustrated work about Doukhobor life in the West Kootenay during the twentieth century. It speaks again to how difficult it has been to be Doukhobor in British Columbia. It emphasizes the peoples’ commitment to their beliefs, and their resistance in the face of government hostility. Finally, it points to the many relevant and appealing aspects of Doukhobor lifeways.