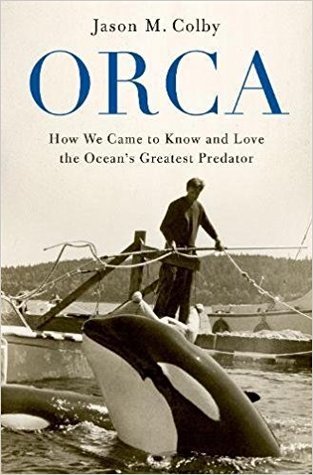 Orca: How We Came to Know and Love the Ocean’s Greatest Predator

Most killer whale stories are sad stories. Jason Colby’s Orca is no exception. The nineteen short chapters take the reader on a deep and dark descent into the live-capture orca fishery that swept through the Salish Sea from 1965-1973. Meticulously researched and beautifully written, Colby’s history showcases the cultural transformation of the region as settlers and scientists came to reckon with the entangled natures of the humans and orcas who share the Salish Sea. Orca provides the best view yet of the transformation of the species from villain of the Pacific Northwest into a “save-able” animal, a mascot for the unique environmental politics of British Columbia and Washington.

This story of a region – and its headlining marine megafauna – is accompanied by Colby’s own family history. His father’s participation in the capture industry still haunts the family, and Colby’s honest engagement with this past is just one way that Orca will stand the test of time. Colby’s insider position provided him access to many of the central figures of the captivity industry. Orca captors like Ted Griffin and Don Goldsberry had front row seats for observing the species’ adaptations to new human-made threats. By bringing us into the world of orca captors, Orca also invites us into the whale’s world, highlighting the changing behaviors of these apex predators to helicopters, tranquilizers, and custom-made fishing nets. We hear of how the whales learned to recognize the boat motors of specific would-be captors and how the male orcas adapted to swim with their long dorsal fins at a tilt to evade human eyes. As much as any history of the species, Orca foregrounds the remarkable intelligence of the killer whales to survive through extraordinary adversity.

What makes Colby’s Orca exceptional is his ability to foreground the complexity of characters like Griffin without downplaying the incredible violence of the orca roundups. Few historians could tell Griffin’s story with such complexity and grace. Colby is at his best when drawing out the motivations of those involved in the live captures. The book’s sole limitation is that it does not tread far into the stories of the activists and legislators who also proved important in protecting these whales.

While Colby’s Orca is focused on the decade of live-captures in the Salish Sea, his book also contributes to our understanding of how earlier settler activities along the Salish Sea impacted orca populations (1880-1964). Orca makes clear that the live-capture industry was not the first threat to the Southern Resident killer whales. The overharvest of salmon runs in the late nineteenth and early twentieth century, in tandem with a “shoot-on-sight” culture among salmon fishers, proved devastating for the Southern Resident killer whales. Those that oppose protections for Salish Sea orcas today would prefer to use orca population estimates just prior to the live-capture era as the baseline for species’ recovery. Colby’s history makes clear that we must also account for the dispersed violence of earlier generations.

Colby’s Orca dives headlong into a dark chapter, yet still offers the reader a broader understanding of all involved – and even some grounds for hope. Indeed, the orcas are still here. Now, we face decisions that might determine whether these orca populations can continue to survive the ever-changing Salish Sea. Colby’s Orca is the sort of fine-grained history that can both guide our policy decisions and help us grieve this traumatic past.