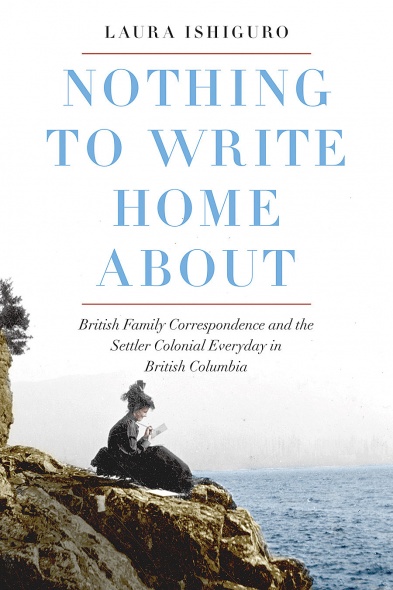 Nothing to Write Home About: British Family Correspondence and the Settler Everyday in British Columbia

The history of colonial British Columbia is, in many respects, well-trodden ground. Over the past few decades, scholars like Jean Barman, Cole Harris, and Adele Perry have made multiple transformative contributions to our understanding of how settler colonialism and Indigenous survivance have shaped the past and present of Canada’s westernmost province. As a historian of Canada and colonialism whose work doesn’t focus on BC, I continue to be impressed by the volume and quality of research that exists about this place. I might also have wondered to myself, in a less-than-generous moment, if the most important arguments about this “edge of empire” and its history had already been made.

I am happy to report that Laura Ishiguro’s Nothing to Write Home About: British Family Correspondence and the Settler Everyday in British Columbia has proven me wrong. Focusing on the years between the 1858 discovery of gold in the Fraser Valley and the start of the First World War in 1914, Nothing to Write Home About is a beautifully written and original contribution to the historiography of settler colonialism, British imperialism, and family ties in British Columbia and beyond. Family letters, a rich and surprisingly understudied body of archival evidence, comprise the book’s subject and primary source base. It was while reading several thousand letters exchanged by members of fifty families (mostly middle-class British settlers in BC and their kin in the UK), Ishiguro writes, that she came to a surprising realization: the topics that dominate the extant scholarship on this time and place – including violence, the creation of racial hierarchies, and Indigenous resistance – were not what settler correspondents chose to write home about. Having noticed what settler letters didn’t say, Ishiguro decided to look closely at what they did. She finds that in their letters, settler correspondents focused especially on two things: their trans-imperial family ties and various unremarkable aspects of their everyday lives – all of which worked together to frame the settler presence in British Columbia, and British imperial power more broadly, as natural and ‘normal.’

Ishiguro’s innovative and careful reading of family letters is enriched by her discussion of the postal system as networked infrastructure that was crucial to the construction and maintenance of Britain’s global empire. The ease and affordability of maintaining long-distance relationships in writing, she notes, was also what “made…migration and [family] separation thinkable, even attractive, for many Britons” (54). After discussing the imperial postal system and demonstrating that separation across vast distances was “not an aberration” for British families in this period (62), she then devotes two chapters to settler boredom and food. Focusing on these issues, Ishiguro tells us, allowed correspondents to ignore other aspects of life in late nineteenth- and early twentieth-century British Columbia, including Indigenous life and settler violence and vulnerability. The book’s third and final section turns to what Ishiguro calls “faultlines” or instances of “epistolary rupture, conflict, or secrecy” (27). This part of the book includes a chapter about death and an especially rich case study focused on correspondence by and about

Michael Phillips, a British settler who chose not to tell his English relatives that he had married a Ktunaxa woman named Rowena and had twelve children with her. Epistolary silence and gossip, Ishiguro writes, could be effective “strategies for maintaining relationships in circumstances when colonial and metropolitan lives, and families of origin and marriage, seemed otherwise irreconcilable” (27).

Reflections on silences and the partial nature of the colonial epistolary archive punctuate the book, and as do welcome reminders that letters are material objects as well as textual evidence. I appreciated Ishiguro’s authorial voice throughout, as well as her positioning of herself as a scholar who is “also a descendant and direct beneficiary of…[the book’s] subjects” (217). Nothing to Write Home About, in sum, is a sophisticated and rewarding study that will be of interest to readers of BC and Canadian history, settler colonial studies, British imperial history, family history, and epistolary studies.