Music of the Alaska-Klondike Gold Rush: Songs and History

By Jean A. Murray 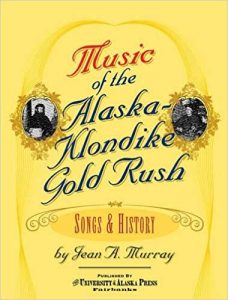 CAREFULLY AND EXTENSIVELY researched work, Music of the Alaska-Klondike Gold Rush provides a musical and lyrical depiction of goldmining settlements, their culture and concerns. Jean Murray’s introduction explores the history of the gold rush, comparing the hopes of miners before they left home with the general disillusionment of those in the mining settlements for some time. Murray asserts that music held a prized place in the lonely, often monotonous lives of the miners. Her compilation evidences the wide range of music common in the camps, providing examples of bar-room choruses, fiddle solos, and melancholy ballads such as “Billy Pike of Klondike.” Murray introduces each piece individually, citing her sources, as well as contemporary commentary seen in diaries or songbooks of the time. Often, Murray also includes biographical and anecdotal information about characters strongly associated with each piece. Maps, illustrations, and the book’s accompanying thirty-five minute CD provide a sense of each piece’s original place in the Alaska-Klondike gold rush. The book’s preface states Murray’s hope that Music of the Alaska-Klondike Gold Rush will be “used and enjoyed” by both “the music lover and the history buff” (x, xiii). As such, the book is a success. It does indeed offer a wealth of potential entertainment and food for thought, conveniently organised and practically indexed. Prospective academic purchasers should note, however, that this work is not intended primarily for scholars. Its documentation is extensive enough to provide a helpful base for scholarly work, yet Murray openly admits that selection of music for the compilation was at times based on personal preference (x). Moreover,
she does not engage in interpretive commentary about individual songs. She does occasionally step in to change a song’s diction when she feels that it includes “gratuitous racial slurs that were an unthinking part of the milieu.” (For example, in “The Cat Came Back,” she changes the term “nigger” to “fella”[xiii].) Her basis for determining what is and is not a slur is unclear, as she herself freely refers to “Eskimo” rather than “Inuit” (54) and does not comment on the degrading depictions of women pervasive throughout the songs.
Music of the Alaska-Klondike Gold Rush is highly useful to those interested in a comprehensive survey of music of the time. For those who love sing-along songs, Murray’s book is well worth perusal.