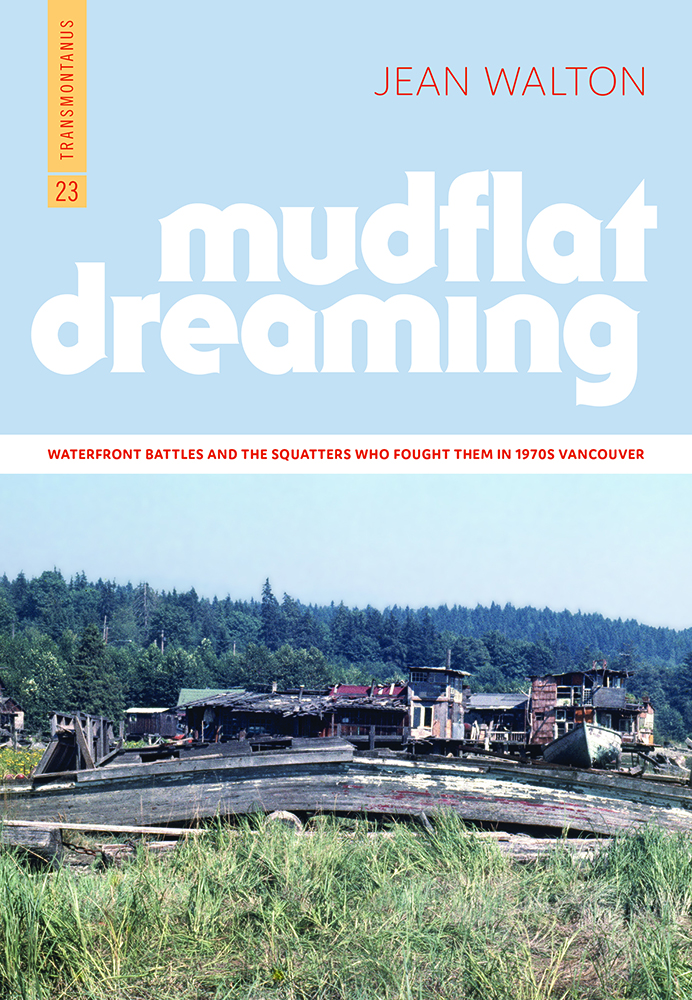 Mudflat Dreaming: Waterfront Battles and the Squatters Who Fought them in 1970s Vancouver

Liminal spaces make places. This is the central theme of Jean Walton’s book, Mudflat Dreaming, an unconventional work of literary nonfiction that weaves together memoir, film studies, and Vancouver history in the 1970s, a pivotal moment of social change and the reimagining of cities. Like the littoral spaces Mudflat Dreamingtraverses, the book flows in and out of stories like the movements of a tide, tacking back and forth through the author’s adolescence in Surrey, the nearby working class neighbourhood of Bridgeview, and the counterculture community Maplewood Mudflats on Burrard Inlet. This synchronizing of form and content reveals Walton’s conceptualization of place: not as a static geographic location but a tangle of haunts, memories, and detritus. Water ebbs and flows, structures are demolished and new ones are built, materials collect and circulate. There are no chapters in this book, only anchored themes that, like the mudflat shacks, rise and fall with the tides.

It’s appropriate that a book about a city often referred to as “Hollywood North” should ground itself in close readings of film and the visual signatures of place they contain. Two of these films, Livin’ On the Mud and Mudflats Living, were made to document the lives of inhabitants of the Maplewood Mudflats. The other film,Some People Have to Suffer, documents the grievances of the working-class residents of Bridgeview and their problems accessing services and infrastructure. This latter film was a product of a fascinating National Film Board program, “Challenge for Change,” an initiative that empowered underrepresented communities to produce films—a government-sponsored foray into media activism. Though blue collar suburbs and floating counterculture villages may seem dissimilar, Walton shows how they shared more thanone might expect, emerging through the same historical processes and social and geographic context.

Walton’s use of a fourth film, Robert Altman’s “anti-Western” McCabe and Mrs. Miller, which was filmed nearby in the North Shore Mountains, is where the author most vividly traces the contours of a particular Vancouver and its connections to the broader world. The mudflat dwellings were recreated in the mountains for the film, as a hastily cobbled-together mining community in the late-nineteenth-century Pacific Northwest, the drama orbiting around a brothel. Here Walton draws connections between sex work and extractive capitalism—bodies and landscapes forged through global circuits. As she does throughout the book, Walton lets her filmic archive lead her outward, engaging with those who had appeared on screen, each joining a chorus that sings a particular Vancouver into existence. One of these contemporary informants, Jackie Crossland, who played a sex worker-turned-cook in McCabe, describes the making of the film, but also the vectors of her life that extended outward from it: her central role in the local theatre community, her advocacy for youth sex workers in the Downtown Eastside, and her place in counterculture and queer circles—a life that occasionally brushed up against mudflat dwellers.

Walton periodically reminds readers that the Squamish, Musqueam, and Tsleil-Waututh peoples have never disappeared from their unceded lands in the Vancouver area—and briefly draws attention to an intriguing alignment of interests between mudflat dwellers and Tsleil-Waututh Chief Dan George—but sidelines the intrinsic relationship between settler colonialism and squatting. Historians have shown how the production of urban space for settler Vancouver depended on Indigenous dispossession and that the frequently perplexing issues of squatter and foreshore rights have always been entangled in the mechanisms of “municipal colonialism” in the city (Stanger-Ross 2008; Barman 2007). When one mudflat dwellers maintains that “…part of what’s so wonderful there is that it isn’t properly speaking anywhere at all, it’s like living right out of the world together” (29), he conjures the purity of living outside the imposition of authority over him or the land, vanishing Indigenous sovereignty and territorial authority—the constitutive subtext of dispossession that made the act of resistance by squatters possible in the first place.

Despite this missed opportunity, Mudflat Dreaming has much to offer historians working in a variety of fields. For scholars working on questions of place and memory, this book should provoke thinking on how to recover and contextualize a past often “hidden in plain sight.” For environmental historians, this book moves beyond urban/rural, metropole/periphery binaries and into the littoral space where water and earth, concrete and mud meet. In a contemporary context of housing crisis and gentrification, this book is a timely reminder that other Vancouvers have been and will always be possible.