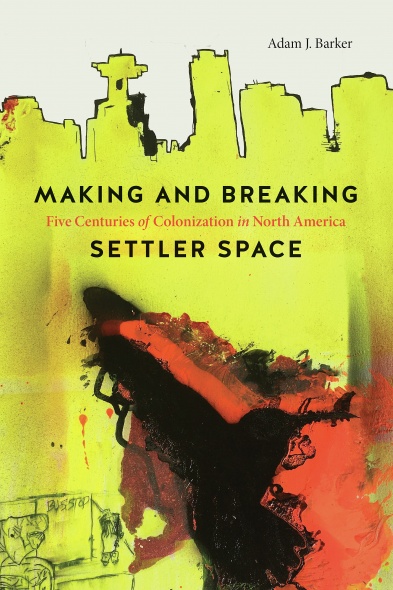 This provocative book does many things: it conceptualizes the larger spatial and historical processes of settler colonialism, it examines and critiques social movements in the context of enduring Indigenous sovereignties, and it unpacks the affective elements of settler identities. Making and Breaking Settler Space is primarily directed at scholarly and activist audiences concerned with the complex and contingent process of decolonization, and Barker is especially interested in the interplay between seemingly hegemonic structures of colonial violence and dispossession and the spaces where that hegemony is at its most frail. Those spaces, Barker argues, are where the important work begins.

Each chapter of Making and Breaking Settler Space begins with a short reflection on Barker’s own experiences as a white middle-class settler from suburban Ontario with aspirations to allyship. From there, each chapter works at different temporal, spatial, and social scales, from the entire “northern bloc” of colonial North America (meaning territories currently claimed by the US and Canada), to movements such as Occupy and Idle No More, to individual settlers’ orientations toward Indigenous resurgence and decolonization. Readers familiar with settler colonial theory will find an excellent and up-to-the-moment overview of the literature here, with some particularly cogent summations of what settler colonialism is and does. For example, Barker argues convincingly that settler colonialism works through “structures, systems, and stories” (8) that come from the ground up—from quotidian settler experience—as much as they come from the top down. In this, Barker makes a compelling case that it is the settler, as much as settler colonialism, that must be transformed.

Barker is perhaps at his most innovative here in his discussion of failure—not just of his own past failings as an activist, but of the larger structural weaknesses of the settler colonial project:

“the cracks, flaws, and failures that expose the contingency and fragility of settler colonial projects in these lands.” (3) He draws here primarily on the work of theorist Jack Halberstam, who has argued for “low theory,” in which “the messy, the interpersonal and private, the unexpected, queer, and unsuccessful” (22) can be powerful wellsprings of both critique and action. In short, Barker advocates for failure, encouraging us to look at “that which exists beyond hope” (187) and arguing that we must accept failure as “the irrecoverable collapse of the entire settler enterprise. Failure has to be considered as the wilful act of being bad at being settler colonizers.” (209)

There is much to discuss here, from Barker’s conceptual models of settler spaces to his deployment of affect theory, from his inclusion of his own autobiography to his critique of progressive, leftist, and radical social movements. In the end, though, looking for the cracks in settler colonialism’s structures, systems, and stories, he argues, is one of the most important paths toward meaningful change. “There are spaces that do not conform to settler colonial structures – spaces that exist between settler colonialism and Indigeneity,” Barker writes. “These are the uncertain edges where colonial logic does not overwhelmingly structure social space. By finding, engaging, and working to expand these spaces, we can develop new conceptual and practical possibilities for decolonial action.” (191) As just one contribution to a rapidly-growing literature on decolonization and settler subjectivities, Making and Breaking Settler Space offers important points of conversation and contestation as we continue to figure out what it means to live together in this place, and how we should go about doing something about it.