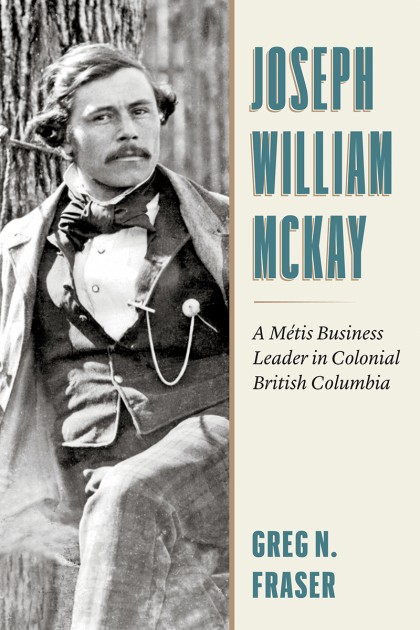 Review By Carla A. Osborne

In 2003, the Canadian Supreme Court handed down its decision in the case of R. v. Powley, triggering significant new public interest in Métis identity and history outside of the familiar geography of the Canadian prairies. That interest has taken a unique direction in British Columbia, where the Prince George Métis Elders’ Society had already begun working to document the Métis communities founded in the northern interior during the fur trade in the late 1890s. Research and writing by Métis and non-Métis based in the lower mainland has a different emphasis to date, tending to focus more on the participation of specific Métis individuals in the province’s development and history. Greg N. Fraser’s fast-moving biography of Joseph William McKay is a thought-provoking contribution to this lower mainland trend in studies of the Métis in British Columbia.

Born in 1829 to Métis parents at Albany Factory in present-day Québec, McKay remained closely connected to the Hudson’s Bay Company for his entire life. Like many Métis whose families had English and Scottish ancestry and the ability to finance a good education for their children, McKay did not remain on the prairies after completing his formal education at Red River. On joining the HBC, he was promptly sent to the most southwestern of the company’s holdings, arriving at Fort Vancouver in October 1844. The impending boundary settlement with the United States and the HBC’s need to reorganize its operations as it withdrew from the Oregon Country opened up new opportunities for clever new hires with good connections. McKay learned quickly, and soon found himself under the influential wing of James Douglas, whose own career was on the rise. After barely two years in service and at the raw age of seventeen, McKay was based at the new Fort Victoria and working as general manager of the Northwest Coast. Like so many Métis, he soon settled into a work life of extensive travel characterized by work with multiple First Nations and employees of Russian and American fur trading companies.

Fraser emphasizes McKay’s initiative as he carried out assignments supporting the expansion of the colonies of Vancouver Island and British Columbia, including what may be his most well-known role as founder of Nanaimo. But there was far more to McKay than this. Fraser highlights McKay’s independent business interests, which forced a hiatus in his early career at the HBC. It is at this point that Fraser begins to explore the growing struggle between the HBC and colonists over the direction of colonial development. Douglas’ influence over the local government helped facilitate McKay’s election to the local House of Assembly. McKay continued to develop social and business ties that smoothed his own transition from the HBC-dominated era to his later career with the federal government as an Indian agent and his several published reports and memoirs.

As Fraser notes, at this time things worked differently in the far west, allowing Métis men like McKay to reach positions closed to them further east. From his years at the HBC to his post-1878 engagement with First Nations, including helping protect their reserve lands, McKay forged a unique career. McKay’s life story shows how much of what was different in the far west was tied to the initial lack of existing colonial infrastructure, creating a temporary niche specially suited to Métis like McKay who creatively combined formal education, personal charisma, and diplomatic skill in their day-to-day work.