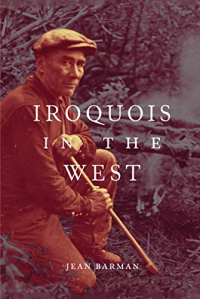 Iroquois in the West

Sometimes the most detailed and poignant histories emerge from historical fragments. In Iroquois in the West Jean Barman uses what she calls “slivers of stories from the shadows of the past” to tell a rich history. This history centres clusters of Iroquois in the west, but frames a larger argument: that Indigenous peoples were not bit players in history. This might at first seem simplistic. Yet, historians have not always been successful in treating Indigenous peoples as active, mobile agents who utilized colonial structures for their own purposes. Barman succeeds in presenting her subjects as nuanced humans enmeshed in the fur-trade and colonial economies in complex ways. Iroquois in the west undermined colonial authority and supported it, but always in pursuit of their own self-determination. They made themselves.

Barman is a fastidious organizer. Divided into four distinct, yet mutually supporting parts, Iroquois in the West is clearly articulated. Part I begins in the Iroquois homelands and traces the history of the formation of Caughnawaga. Parts II and III move west tracing Iroquois voyageur and their participation in the fur trade of the Pacific Northwest. Here we see adventurous and intelligent participants in both fur trade and local Indigenous politics. While many of these subjects returned east, Barman traces the histories of those who made the west a new home. Part IV focuses on the Jasper Iroquois and their twentieth century survivance. Barman is astute at showing her reader where she is going at the outset, and succinctly summarizes each chapter in neat codas that ease the reader through her source material.

The clarity of her work is a particular strength. Barman’s inclusion of a Research Note explaining her engagement with the Voyageur Contracts Database and articulating her process in re-creating Iroquois population figures is insightful and innovative. For the student of history, it presents an opportunity to pull back the mysteries of the research process and to engage directly the operation of historical scholarship. These are skills attained through years of experience. That Barman shares them with her audience is generous and generative.

As a historian of the fur trade era Barman is adept at navigating source material. Tracing Iroquois through fur trade documents such as trader’s accounts and post journals is a difficult task. Not only is this an incomplete record, but those who left these documents did not always take the time to differentiate between the nations and peoples they encountered. Barman brings her skills as a historian to pull out detailed information from these illusive traces, combining thorough archival work with the delicate employment of oral history and a conscientious self-positioning. Barman’s historical stories emerge from living descendants and her community connections.

In celebrating the survivance of Iroquois identity in the west Barman at times loses sight of the impacts on other Indigenous peoples. As time progressed intermediate spaces in what Barman calls the Indigenous-White divide were harder to maintain. While some clusters of Iroquois “disappeared” into local nations or settler society, those who continued to maintain an Iroquois identity persisted. This positioning directly affected the relationship between these communities and the state. Barman explicitly shows how both treaty and scrip commissions rejected the Jasper Iroquois’ indigeneity. Yet, they were not just Iroquois, they held important connections with other nations. How is this complex indigeneity navigated and mobilized? How does identity shift as peoples move out of their traditional lands into other people’s territories? These are deeply historical questions that have serious reverberations into our contemporary socio-political situation. As such, this book will have a lasting impact on those who study indigeneity, identity, and colonialism as well as those in migration studies. In the end Barman has provoked more questions than she answers, but this is a strength of her work.