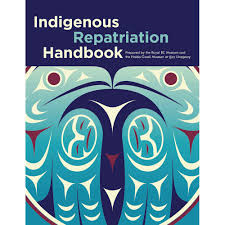 The First Peoples of the Pacific Coast are at the forefront of Indigenous Museology and Repatriation Scholarship. While some communities might be just starting to tangle with the complex politics and strategies of claiming back cultural heritage from international museums and galleries, many in BC have been running their own museums, curating collections and bringing Ancestors home for well over 50 years.

The three authors who prepared the Handbook are very well known in the field. Jisgang Nika Collison heads the Haida Gwaii Museum that houses many repatriated objects and photographs returned internationally. Sdaahl K’awaas Lucy Bell, also from Haida Gwaii, is the head of Indigenous Collections and Repatriations at the Royal BC Museum and helped bring 500 Ancestors home from the US, UK, and Canada. Lou-ann Neel, an artist and arts administrator for over 30 years, keeper of the Kwakwak’wakw names of K’idithle’logw, Ika’wega, Gaa’axstalas, has also guided objects on their journeys home.

The Handbook was created as a response to a 2017 symposium, Repatriation: Moving Together Forward, held in Victoria. With over 200 delegates, it brought together international scholars, activists and heritage leaders from all continents. With the rise of online sources such as collection catalogues, what used to take years to track a lost piece can now take minutes. It is this target audience — Indigenous Community members — that wish to bring their heritage and ancestors home, that the Handbook was written for.

At 73 pages, the Indigenous Repatriation Handbook is short and succinct but its appendices — running to 89 pages — are truly mighty. With checklists on calling your first community meeting (don’t forget the refreshments!) to templates of letters to a holding museum, to handling border crossing with human remains and Oral History Release Forms for elders, it is here that the impact will be strongest.

The Handbook is divided into seven short sections, such as “Organizing a Successful Repatriation” to “Conducting Research” and “For Institutions Wishing to Repatriate to Indigenous Peoples of BC”. Interspersed with photos, quotes and art, it is clearly written and well laid out. While the emphasis is on the Royal BC Museum experiences and the central case study is that of the Haida Repatriation, the advice is very generalizable and useful. It is well-matched with the documentary Stolen Spirits of Haida Gwaii (Primitive Entertainment: 2005).

The links, addresses and contact names provided will change in future, so the authors are clear that this work will be updated with future editions. It would be great to see future editions take on the issues of rights to publication and royalty issues for photography, sound and video usage. The image of Jaalen & Gwaai Edenshaw doing research for the first Haida-language film Edge of the Knife (65) reflects the importance of the educational and cultural lives that objects and stories continue to provide. It was great to read the stories of young people encountering their Ancestors for the first time and of Elders working to add depth to the written histories in collections. The optimism and genuine enthusiasm in the text is important and deliberate, as there will be very difficult moments that emerge during a repatriation process.

To further expand the dialogue, it would be interesting to combine a reading of this book with the ethnography of the complex repatriation of a Northern Manitoba Water Drum (Naamiwan’s Drum: The Story of a Contested Repatriation of Anishnaabe artefacts, Toronto: Univ of Toronto Press (2016)) by Maureen Mathews and the 2003 NFB film, The Return of G’psgolox Pole about the repatriation of a Haisla pole from a Swedish museum.