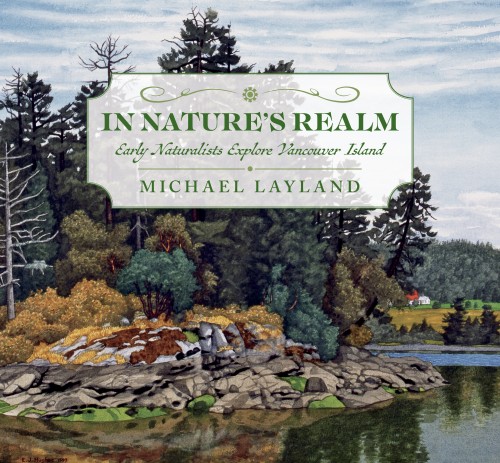 In Nature’s Realm, a third tome from Michael Layland that focuses on the (mostly) colonial histories of Vancouver Island, is an artistic and literary achievement. Layland’s hybrid of chronological and thematic descriptions of Vancouver Island-related material is made up of rigorously researched historical accounts. He uses a dialogical and biographical narrative style that is punctuated with a time-machine of historical and contemporary sketches, illustrations, photographs, and paintings. Layland re-introduces to us some usual naturalist suspects such as Archibald Menzies, David Douglas, and James Macoun by describing their various forays into naming, cataloguing, and describing organisms throughout the biomes of the island. Other less usual communities and projects outlined in the book, at least for accounts of historical naturalist publications, include First Nations, US citizens, women, importation of songbirds, and military history.

Layland does a better job than most, but still falls well short of where this kind of book should be in terms of accounting for and celebrating Indigenous Knowledge. His positionality and mostly white-settler data-source severely limits the small Indigenous section in the book. Perhaps this is where much of the book falters generally: the reification of some mostly male characters, and their financial backers, who had the where-with-all to account for their early trips to Vancouver Island. I recognize that moving away from this narrative is a difficult research pivot since patriarchy dominates historical accounting. Yet, the short chapters devoted to women in botany, First Nations, and other marginalized voices are small first attempts at a necessary larger dialogue. To his credit, Layland comments throughout the book on the need for further research in collaboration with these communities.

In particular, I notice where Layland’s work bumps up against the naturalists’ processes of appropriation. Whether it is how he describes the naturalists connecting to local knowledge, or working off of other’s notes, Layland speaks to the complexity of motivation behind many of these naturalists. It wasn’t usually benign knowledge generation, but rather capitalism and imperialism, that lay behind their work. Despite this acknowledgement, I was still left wondering about the logic of a name-based organizational structure. I recognize the appeal of being able to trace the taxonomic nomenclature of the plants and animals, being someone who has studied these methods for years. Yet, I also recognize the further colonization that occurs with the erasure of place and knowledge that is too often a feature of such historical accounts. Could this work have been done in partnership with Indigenous communities to help describe, catalogue, and tell not only the colonial tale, but the narrative of the Land and Sea and its people?

Layland’s work is encyclopedic by design. At times the book feels like a physical Google search of “early naturalists of Vancouver Island,” with pages and pages of short biographies and contributions of various characters. Of course, if you did search this on Google, you would be sorely disappointed to find very little of the descriptions contained in the book. As described in the afterward:

The men and women who appeared in these pages were the first Europeans to investigate and record the natural history of what is now Vancouver Island. These naturalists, as we call them, included scientists and amateurs, some academically trained, others self-taught. They were interested in many different aspects of nature: plants, birds, insects, fish, and other marine life. They saw and wrote of the forests in their pristine state, immense runs of salmon ascending many streams and butterflies in great numbers, and of how local peoples interreacted with and used the flora and fauna of their region.   (p. 247)

Of course the word “pristine” has its own baggage, but I was left wondering what a book that contributes to Indigenous knowledge, rather than profits off its back, like many of the early naturalists did, would look like? How might the many different First Nations of Vancouver Island be supported in developing their own material that celebrated places, knowledges, languages, and cultures while maintaining their own intellectual properties, building capacities, and a bank of knowledge? Much of the knowledge of these places and their organisms are derived from early contact (and ongoing contact) with knowledge keepers. It is time to write books that treat these relationships with the respect they deserve. Layland calls for this too.