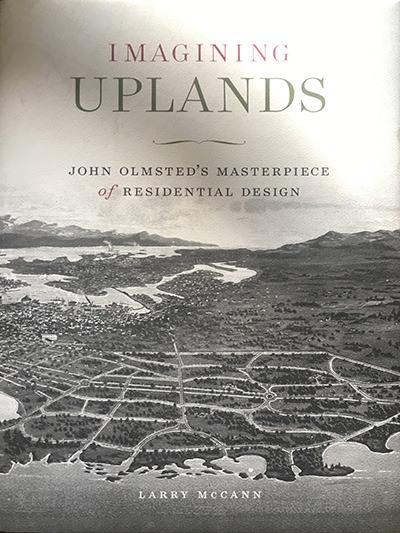 This is a most handsome book, and a most intelligent analysis of the dense process of realizing a design concept. Larry McCann has allowed his telling of the Uplands history to be imaginative, if not literally the “imagining” perceptively chosen for his title. Perhaps such liberality of critical approach explains why social geographers have assumed a leading position in scholarly inquiry about the social landscape. Fully evident are the theoretical and disciplinary underpinnings of McCann’s interpretation (one of those older terms that merit retention in the nonetheless refreshing wash of deconstruction). However, he is prepared to animate archival data with personal experience, contacts or preferences, factors too often dismissed as mere anecdote. In fact, the conception, constitution, and construction of the Uplands design in British Columbia’s imperial city of Victoria depended on an amalgam of acquaintance, ambition, and even accident. Accident here encompasses the broad sense of being subject to the vagaries of economy and politics; in this instance the volatility of British, American, and French economies and its effects on real estate investment, plus the World Wars and intervening Depression.

Through those harsh events – the First World War in particular – poleaxing Sir Wilfrid Laurier’s prediction that the twentieth century would belong to Canada – the inherent quality and potential of John C. Olmsted’s scheme for an artistically subdivided residential development endured. Built out chiefly after the post-1945 Reconstruction of Canada managed under Prime Minister Louis St. Laurent, the Uplands remains Olmsted’s finest work as a landscape architect, and among the finest international examples of a landscaped suburb.

The book’s seven chapters lead the reader in a picturesque manner through the temporal topography of this erstwhile section of the Hudson Bay Company’s Uplands Farm which occupied the outskirts of Victoria, at the margin of the British Empire’s senior Dominion. By “picturesque” I refer to the meandering instead of lineal nature of the Uplands, but equally to the nature of much of Olmsted’s enterprise and his very design motive. The genealogy of Olmsted’s mode of thinking and array of reformatory urban planning, from garden suburb to neighbourhood unit, is rooted in the Franco-British Picturesque. In Olmsted’s practice – tutored by his celebrated stepfather, Frederick Law Olmsted, and studies in Britain – the Picturesque married pictorial with topographical and proto-functional imaging/imagining. Recall English landscape architect Capability Brown responding to the lay of the land with the imagined vistas of French landscape painter Claude Lorrain in mind, or John Nash seeing both the aesthetic and profitable potential of rejigging London’s Regent Street and reinventing the Royal grazing fields north of Oxford Street as the fashionable residential Regent’s Park.

Quite legitimately, in placing Uplands in its more immediate temporal context, McCann concentrates on the subsequent transatlantic legacy of pleasant subdivision or improved company town. Similarly, he provides an enlightening review of Olmsted’s process of learning his vocation and operating it as a business. Here McCann’s willingness to attend to the ostensibly trivial incident is especially welcome. For example, he describes a time when a missed railway connection forced Olmsted to spend a cold November night in 1909 in the Empire Hotel at Wolseley, Saskatchewan. The nomenclature, no less than Olmsted’s itinerary and letter written that night to his wife, vividly evoke the material and mental fabric of those times when Olmsted practiced his artistic trade coast to coast on either side of the forty-ninth parallel. McCann also confronts the alienation of aboriginal land title but situates it in the attitudinal landscape of the day. Nor does he overlook the larger scene, such as the CPR’s subdivisions in Vancouver or Calgary, and the influence of other actors such as the itinerant English landscape architect-planner Thomas Mawson.

Consequently, McCann views the Uplands as a record of deeds (pun intended) as well as an experiential space, visually evoked by the fine sepia-tone historic photographs so nicely bled into the text throughout the beautifully printed book. The result is a fascinating perambulation through the quasi-kinship domain of early twentieth-century real estate entrepreneurship (perhaps Harold Innis should have extended his Empire of Communication to track that enterprise) and planning/architectural production in relation to privileged social culture.

This is a significant contribution to regional and continental economic, social, and design history, as well as a persuasive case for the heritization of Olmsted’s masterly Uplands.