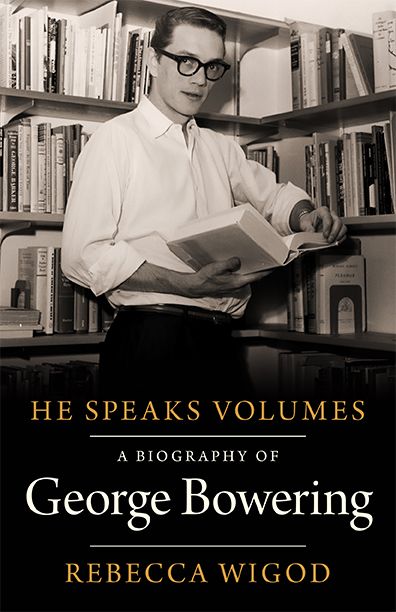 He Speaks Volumes: A Biography of George Bowering

The Canadian writers who rose (or leapt) to prominence in the 1960s and 1970s, and who are sometimes thought to be synonymous with Canadian literature itself, are now venerable. Although Margaret Atwood remains a formidable public presence, Alice Munro has withdrawn from the writing life. The recent deaths of Leonard Cohen and Patrick Lane confirm the sense that time is quickly passing. As an account of a momentous period in Canadian literary history, and as a depiction of a central figure therein, Rebecca Wigod’s engaging biography of George Bowering is doubly welcome.

Bowering has been a notable author for six decades, his poems and novels widely taught and routinely examined by scholars. Readers of BC Studies will recognize his distinguished place in the literary culture of the province. After a childhood in the Okanagan and a false start at Victoria College, Bowering attended the University of British Columbia in the late 1950s and early 1960s, making his name as one of the ambitious students behind Tish, a literary journal cobbled together under the influence of the American avant-garde. He left Vancouver for work and further studies but returned in the early 1970s to begin a long teaching career at Simon Fraser University. His connection to the city registers in the title of Kerrisdale Elegies (1984), probably his most admired book of poems, while his regional interests have shaped his expansive, and still growing, body of work. The novel Burning Water (1980) reimagines colonial exploration in the Pacific Northwest, while Bowering’s B.C. (1996) narrates provincial history for a popular audience. Now retired, Bowering continues to live in Vancouver—not in Kerrisdale, however, but in West Point Grey.

In He Speaks Volumes, Wigod tells Bowering’s story in twenty chapters, each focusing on one dimension of his personal and professional lives. The book is a mosaic, with Bowering variously “The Varsity Man,” “The Father,” “Mr. Baseball,” “The Success,” and so on. By her own admission, Wigod draws heavily on Bowering’s diaries—an incredible fifty volumes—and partly as a result the biography is sympathetic. I will suggest only two ways in which it stands to be supplemented by future commentators.

The first pertains to aspects of Bowering’s relationships. Although it lasted nearly thirty-seven years, his first marriage was unhappy. Wigod has little option but to describe Angela Bowering’s “often-fraught domestic life with George” (96), their many disputes, and their competing attachments, including his “dangerous liaison” (185) in the 1980s with the writer Constance Rooke. This information is not entirely new. When Rooke died in 2008, an obituary in the Globe and Mail made no secret of the fact that she had been “passionately involved” with Bowering. Wigod is tactful rather than prurient, yet she passes somewhat briskly over events that caused considerable anguish, seemingly hesitant to tie such episodes to Bowering’s literary pursuits. Readers may find it difficult to reconcile the misery generated by the marriage with the impression, cultivated by Bowering and largely upheld by Wigod, of the poet as blithe spirit.

My second remark concerns the interpretation of Bowering’s works. Because his poetry and fiction are typically autobiographical, the connection between life and art might seem self-evident, the rationale for an explanatory biography obvious. Wigod’s Bowering is charismatic and accomplished, the recipient of “[a]ll manner of accolades and awards” (11), but the biography has relatively little time for the books themselves; it tends to defer to reviewers’ opinions rather than providing original assessments. A lack of commentary is particularly noticeable in the case of Bowering’s more demanding works. Wigod observes of Allophanes (1976) that “[f]or the average reader, the poem is a word salad” (134), but she declines to explain at length how the challenging poem might reward readers’ persistence.

He Speaks Volumes is nonetheless a fascinating and undeniably important book that will be esteemed by Bowering’s readers, and by students, in the widest sense, of Canadian literature. The latter may also conclude that Canadian literary history is overdue for a thoroughgoing reconsideration—for reappraisals that forgo narratives established by the protagonists, Bowering among them, in favour of novel critical perspectives.