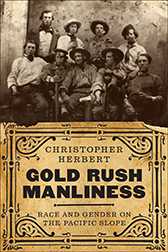 Gold Rush Manliness: Race and Gender on the Pacific Slope

Ten years and many miles separated two distinct, yet in some ways similar, gold rushes. In 1848, rumors of gold at Sutter’s Mill sparked a process that would lure roughly 265,000 people to California, a land that held out the promise of vast wealth at the same time as it represented uncertainty, an unfamiliar “frontier” to be crossed and conquered. A decade later, in 1858, stories about the presence of gold in the Fraser Valley incited a smaller but analogous migration to the region now known as British Columbia. In spite of differences between the two cases, the gold rushes led to the violent dispossession and displacement of Indigenous peoples, the development of new political cultures, and the consolidation of settler regimes. As historian Christopher Herbert persuasively argues in Gold Rush Manliness,gender and race were at the heart of these transformations.

According to Herbert, white men who headed West in pursuit of gold refashioned masculine ideals in response to their new environments and in contradistinction to a range of “Others,” including black, Chinese, and Indigenous peoples. Absent secure political and social institutions, “gold rushers” saw the reconstitution of white masculinity as a means to create order in a gold rush world they perceived as chaotic and unrecognizable, entirely unlike the societies they left behind in Britain and the eastern United States. In their efforts to recreate hierarchies, white prospectors cultivated a set of norms that linked “martial” tendencies with the more “restrained” Victorian customs that characterized social life in the East.

In five thematic chapters, Herbert shows that this colonial order existed up and down the Pacific Slope, though his comparative method also foregrounds regional particularities. White men who travelled via the continent, the “Overlanders,” experimented with martial manliness on their journeys across the Plains, while the seaborne “Argonauts” viewed the passage through Latin America as a test case to prepare for the goldfields (ch.1). Likewise, local conditions generated divergent political structures. In California, gold rushers limited civic participation by invoking republicanism and the rhetoric of citizenship; in British Columbia, a combination of purportedly “colorblind” policies and English nationalism, defined in contrast to American culture, trumped the republican ethos (ch. 2, 3). American and British colonists shared racialized beliefs about the meanings of manhood but often viewed each other with disdain. These divisions informed gold rushers’ cultural practices, though in general white men in the West agreed that leisure activities, risk-taking, and outward appearances served as useful markers of in-group membership (ch. 4, 5).

Herbert’s contextualization of these norms within an overarching Anglo-American frame constitutes the volume’s chief achievement. He illustrates how a composite ideal of white manhood emerged in both California and British Columbia, even as it took on different features in each. Clearly written and coherently organized, the book suggests that shared gender ideologies influenced the development of a “gold rush system,” which existed above and below the 49thparallel. Herbert positions the gold rushes not as episodic anomalies but rather as nodes in a web of interconnected events that took place around the Pacific Rim. With deft clarity, he shifts scales between the general and the particular to reveal how the meanings of manliness changed between 1848 and 1871.

For historians of British Columbia, Herbert’s comparison adds an American counterpoint to the study of masculinity in mining communities, contributing to earlier work by historians such as Adele Perry and Robert Hogg, who have emphasized the British colonial case. A compelling survey of gender, race, labour, and politics, Gold Rush Manlinessshould be read by scholars interested in the cultural logic of settler colonialism in western history.