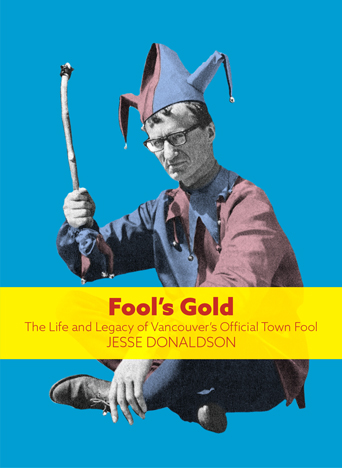 Once upon an acid-warped time, Vancouver had its own town fool.

In the late sixties, a middle-aged family man, Kim Foikis, dressed in a red and blue jester’s outfit and led his donkeys, Peter and Pan, along Georgia Street, hurling bits of pop wisdom at whomever wanted to hear them and teasing the suits and straights.

As Foikis put it: “Canada may be the land of milk and honey, but it needs spirit… I want to help people lose some of their psychic constipation.” (26)

A German immigrant with three degrees, Foikis’s big break came on April 1 (!), 1968, when he received a Canada Council grant for $3500 to continue his fool activities. “Now I can give my whole time to my job,” he declared, “to live joyfully for nothing, and to spread joy and confusion.” (11)

The town fool is an ancient and venerated concept. Jesse Donaldson reminds us that “the fool’s function wasn’t simply to amuse. Like in the days of Diogenes, the goal was instead to illuminate, to be a funhouse mirror held up to society – one that ridiculed its conventions, its hang-ups, and its institutions.” (19)

Foikis contributed to the tradition by stalking about in and around the Vancouver Courthouse at the height of the counterculture. More than anywhere else in English Canada, the sixties in Vancouver were times of bitter conflict – between hippies and ratepayers, developers and conservationists, and the police and anyone with hair below his collar.

Foikis took them all on. He chastised the hippies for dropping out of society and being too lazy to work, claiming that he had not dropped out, but rather, “dropped into the life of the city.” (71) Foikis claimed not to do drugs (untrue) and had gotten his inspiration from his many degrees in literature and theology. “I get high on Mother Goose, not drugs,” he told a crowd at the YMCA (39).

But Vancouver’s straights hated him, drugs or no. The cartoonishly square mayor of Vancouver, Tom Campbell, despised hippies – his diatribes against them were famous, his efforts against their freedoms legendary. Regarding Foikis and his government grant, Campbell thundered to the Vancouver Sun: “‘An old-age pensioner, who’s worked all his life for his country, gets $1200 a year. Here’s a fellow who refused to work and they give him a $3500 young-age pension. Couldn’t we use it for public housing for senior citizens, retarded children, pensioners, deserving students?’” (13)

But the experiment was not to last. It was in 1970, while on a plane to Europe to visit his estranged family, that Foikis felt the spirit leave him (57). He would never don the fool suit again. Foikis died in Victoria in 2007, forgotten and destitute.

As other reviewers have noted, Donaldson does not have a lot to work with as far as source material goes. Entire years of Foikis’s life are blank; that few in Foikis’s family would speak to him while he was alive, never mind of him while dead, creates its own hurdles.

But Donaldson has given us an exciting – if slim – story of one man who insisted we all get high on Mother Goose and remember the tradition of laughing at the world.