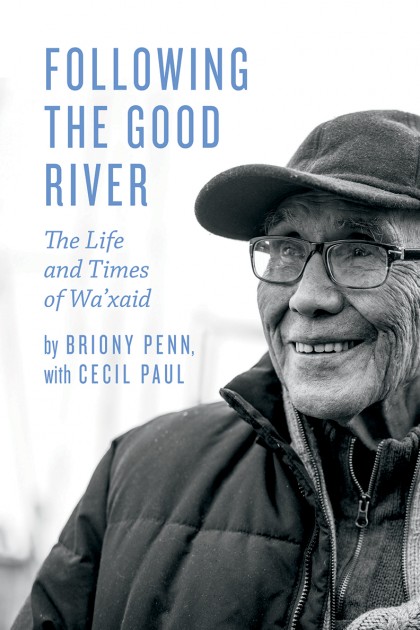 Following the Good River: The Life and Times of Wa’xaid

By Penn, Briony with Cecil Paul

Following the Good River: the Life and Times of Wa’xaid is a triumph of storytelling. As a companion to Cecil Paul’s Stories from the Magic Canoe of Wa’xaid, Following the Good River acts as an important intervention into both understanding the life of Wa’xaid, one of the most preeminent elders living and working in British Columbia, and extending his life’s work by putting it within the context of local history and what co-author Briony Penn calls “fellow paddlers.” As she notes in the preface, Penn worked closely with Wa’xaid to produce this volume due to his feeling that “these written records would provide the dates and facts to form a framework for Western readers, should they need one” (7). In this, the co-authors offer three parts of this companion biography—“historical essays, journal entries, and interviews with fellow paddlers” (7). Following the Good River integrates each of these pieces with delicacy and grace.

For instance, the book begins with Wa’xaid’s reflections on the Kitlope, the place he is from. Speaking directly, Wa’xaid explains both the physical geography and genealogies that live with this place and its people. Along with this description, we also get a short journal entry from 2004 in which the co-authors were traveling through the area, as well as a “Primer on Wa’xaid’s Interwoven Tsimshian / Haisla Lineages.” These “primers” continue throughout, including ones on “the confusing geography of Haisla / Xenaksiala / Tsimshian Territories,” oolichan, coastal temperate rainforests, Wakashan languages, smallpox, whiskey and gunboats, reserves, influenza, Alcan, the Canadian Pacific Railway, hydroelectric power and logging, and more. The result of these shorter interludes interspersed throughout both Wa’xaid’s storytelling and journal entries is a comprehensive overview of his stories that offers a rich, textured vision of why they are important in the contemporary moment. Rather than only providing historical context, these primers offer a glimpse into the stakes of Wa’xaid’s stories as well, illuminating how his stories connect to some of the central questions about Indigenous politics, both historically and today.

Following the Good River is a careful, comprehensive tome that will be of interest to anyone who cares about Indigenous issues in BC and beyond. Rooted in Wa’xaid’s incomparable storytelling about the region and his people’s place in it, this work also offers a new way of thinking about as-told-to biographies (a stalwart in the world of Indigenous literatures) by re-envisioning the co-author relationship into one that is about true collaboration rather than only translation or repetition. Following the Good River offers not only a feat of incredible storytelling but also a model for how this storytelling can be done in a good way for audiences outside of the storyteller’s community. With an eye for important protocols, robust explanation, and compelling narration, Following the Good River is an exciting companion to Stories from the Magic Canoe of Wa’xaid while also being a volume that can stand on its own as a testament to the power of story, community, and collective work.