Following the Curve of Time: The Untold Story of Capi Blanchet 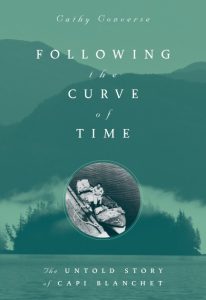 Cathy Converse’s Following the Curve of Time: The Untold Story of Capi Blanchet is a companion piece to Blanchet’s coastal travelogue The Curve of Time and one that enriches its reading. Both monographs offer detailed accounts of the experiences of travelling the Georgia Strait by boat from the tip of Vancouver Island in the south to the Broughton Archipelago in the north. Converse’s interest in elucidating The Curve of Timeis based partly on the fact that it “has been on the market for forty-six years” and is listed by The Vancouver Maritime Museum “as one of the top 35 maritime books written about British Columbia” (5). Converse’s Following the Curve of Time will no doubt share that popularity for it is a good read in its own right. There are two editions; the first precedes the second by ten years, a period in which Converse recorded the changes in the coastal region and expanded her biographical introduction (2). She states that her goal is to  “offer a balance between the public and private dimensions of Capi’s life” (2). Thus, Converse provides a well researched portrait of Muriel Wylie Blanchet (née Liffiton), an adventurous woman who was “born in Montreal on May 2, 1891” (11). She tells readers that she has always had an interest in remarkable women and their accomplishments (1) and that Capi fills that bill for she never gave “a thought to what she as a woman should or should not do” (68). Nor did she fall “prey to the dictates of cultural norms regarding women and boating” (68). Indeed, Converse tells us, Blanchet earned the nickname of Capi “when she became captain of her own boat, the Caprice” (1). She also shows admiration for Capi as a writer, stating “there is a physical eloquence to her writing” as her travelogue “captures the heart, the force, the chi of the coast [… and] presents tantalizing but transient images of place, light and colour” (65). Converse’s writing is no less eloquent as she reveals Blanchet’s development as a child and a youth in eastern Canada, growing up “along the banks of the St Lawrence River” (11); her nurturing in “an educated household that encouraged intellectual pursuits” (22); her marriage “between 1910 and 1912” (35); her family’s move to Vancouver Island in 1922 when her husband suffered from ill health caused by stress (38, 40); the death of her husband (presumed drowned); and her transition to widowhood in 1926 when her fifth child was young and quite dependent on her (57-58). Blanchet’s own story begins at that time when she asserts her independence, takes command of the family’s “7.6-metre cabin cruiser” (49) and, stowing her children, the family dog, and a minimal amount of camping gear and foodstuffs onto the small craft, embarks on a summer-long voyage up, down, and around the Inside Passage. Until the mid-1930s, Converse writes, the voyages are summer sojourns from the family’s regular life in a log house “at Curteis Point on the Saanich Peninsula at the south end of Vancouver Island” (40).

There are parallels between Blanchet’s seafaring travelogue and Converse’s experiences for, she explains, she and her husband “set out in Ikkutut in the summer of 2006 to revisit the all of the places Capi had written about” (1). Similarly, Blanchet remarks that she retraced the route that Captain Vancouver took as he explored the region (19). Thus, she views the land and people through colonial eyes. In that respect, a contrast emerges in the authors’ perspectives of the coastal inlets and islands. Converse explicitly acknowledges that the region through which she is travelling is the traditional and unceded territories of “the ‘Nak’waxda’xw  of Ba’a’s (Blunden Harbour), the Kwikwasut’inuxw Haxwa’mis of Gwa’yas’dums (Gilford Village) [and] the Tlowitsis from Kalagwees (Tournour Island)” (7). At times, Converse seems to apologize for Blanchet’s attitude towards Indigenous peoples, such as her disrespect of their burial boxes (143). At others, she criticizes Blanchet’s plundering of Indigenous belongings such as a copper bracelet that she took and “wore for years” (143). Regardless of her view of Blanchet’s attitudes, Converse claims that her “reminiscences are important because she captured a people in transition” (122). To supplement that record, Converse provides detailed descriptions of the cultural practices of Indigenous peoples like the Da’naxda’xw and Kwakwaka’wakw, noting their annual return to “Dzawadi (Knight Inlet)” to “fish the eulachon for their oil or r’lina (pronounced ‘gleetna’), an important food staple rich in vitamins and minerals,” and a resource valued not only “as a food and for its medicinal properties,” but as a “sign of wealth” (158). Converse augments her illumination of Blanchet’s travelogue with significant discussion of the region – “the Great Bear Rainforest” – informing readers of the great strides in conservation practices that were made in January 2007 through the establishment of the “Great Bear Rainforest Agreement” which “will protect over 2 million hectares from logging, and [place] 7 million hectares … under an ecological management system” (157). Thus, she offers an enlightened history of the British Columbia coastal region and of the peoples whose home it has been since time immemorial. Yet, both Converse’s Following the Curve of Time and The Curve of Time– as complementary texts – offer pleasurable reading.