By Shirley A. McDonald and Bob Barnetson, Editors 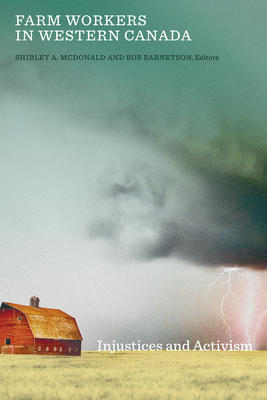 Shirley McDonald and Bob Barnetson’s edited volume Farm Workers in Western Canada: Injustices and Activismprovides a unique and interdisciplinary approach to understanding the role farm workers occupy in the complex industrial agriculture system. McDonald and Barnetson include chapters with a political economy perspective, legal understandings of farm workers in relation to the Charter, and even one chapter based on a transcript of an interview with FUA activist Darlene Dunlop. Their main focus is to examine “the social, political, and economic conditions that have shaped the organization of farm work with attention paid to the effects on workers,” especially with increasing reliance on agri-food production by migrant workers and Temporary Foreign Workers (TFWs) (xvi). While some chapters appear to waver from the volume’s stated goal, this comprehensive collection provides valuable insight into the many factors that make up the Western Canadian agricultural economy.

The most interesting inclusions in this volume are Michael Broadway’s chapter on the influx of migrant workers to Brooks, Alberta as the meat-processing plant there expanded and Jill Bucklashuck’s chapter on the increasing reliance on migrant workers and TFW’s in Manitoba’s meatpacking industry. At first, I was skeptical about their inclusion because meatpacking and processing are akin to working on an assembly line, where one worker does repetitive tasks with little or no time for rest, rather than multiple, season-dependant tasks associated with outdoor farm work. However, Broadway and Bucklashuck clearly show that meatpacking and processing, much like outdoor industrial agriculture, are transitioning to a workforce heavily reliant on migrant workers and TFW’s. Further, workers in both industries suffer from debilitating, long term, and often life-long injuries sustained in the workplace. Placing these chapters in a volume with literature about outdoor farm work demonstrates how meatpacking and farm work are related, regardless of their workplace.

Some chapters appear to waver from the worker-centered goal of this volume, the most notable being Zane Hamm’s chapter on farm owners and operators finding supplemental off-farm work. Hamm’s primary focus is on farm operators and how they struggle to keep their farms operating, rather than the workers who labour on said farms. Hamm’s chapter was interesting in that he shows how the oil and gas industry is a tempting and lucrative alternative income source for farm owners, with some making six-figure salaries in just months in that sector. Ultimately, though, this alternative is gendered in that men are the ones usually going to the oil fields, while women who seek off farm employment are limited to part-time retail work because they are encouraged to take care of the family and the land while their husbands are away.

McDonald and Barnetson’s collection is an important contribution to our understanding of the multitude of factors that constitute the industrial agriculture food system. Their interdisciplinary approach examines the historical, legal, and current issues facing farm workers from British Columbia to Manitoba. While the legal route may be the simplest solution to solving these problems, this volume clearly shows that many forces and levels of government are at work exploiting these workers.