Death in the Peaceable Kingdom: Canadian History since 1867 Through Murder, Execution, Assassination and Suicide 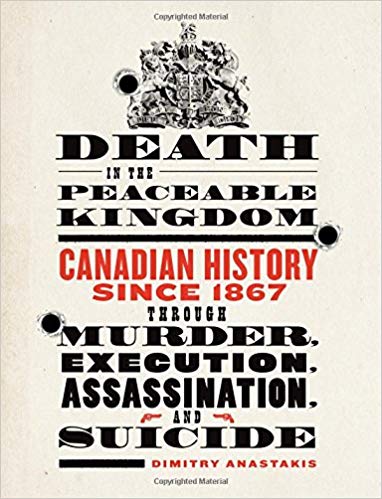 Two decades ago, a prominent conservative academic smacked down Canadian university instructors with the provocatively-titled Who Killed Canadian History? J.L. Granatstein’s answer was, in part, social history and the historians who taught it.

Social historian Dimitry Anastakis’s reply has been to create a Canadian history textbook that uses murder to cure the patient Granatstein declared dead. In a bid to revive student interest in the history of the country, Anastakis shoots a hole point blank in the cherished myth that we’re a country free of violence. Then he hangs the myth, kidnaps and strangles it, and runs it over with an automobile. Violence, it seems, is as Canadian as pumpkin pie.

Anastakis’s inventive approach to framing the story of a sprawling country scores some telling points and raises intriguing issues. In twenty-one chapters, he sets out some “tragic tales” that he uses “as a helpful entrée into many of the broader themes of Canadian history” (xv).

Inevitably readers and instructors will point out missing tragedies, a limitation that Anastakis himself acknowledges (xvi). Perhaps the most egregious omission is what has recently been set out as the greatest act of violence in Canadian history, which is central to the European takeover of a huge swath of the country’s land. This is the dispossession and starvation of indigenous people on the prairies, documented in James Daschuk’s Clearing the Plains. This is not to say that Anastakis ignores indigenous people. Indeed, he uses the killing of the unarmed Ojibwa Dudley George by an Ontario Provincial Police sniper in 1995 as a means to explore the assault on aboriginal rights and status in the post-Second World War era in Canada.

Questions will be raised, too, about how Anastakis weaves the largely violence-free political development of Canada into his thematic approach. Usually, Canada was peaceable.  This problem requires Anastakis occasionally to include some dubious “crimes.”  Did Prime Minister William Lyon Mackenzie King commit regicide “by (mostly) killing the British constitutional connection to Canada” in the 1920s (117)? If this be violence, one might wish the country and world had more of it.

Readers in British Columbia will have plenty of cases to recommend to Anastakis, some of them central to the history of this country. The deaths – contemporary estimates range from 1,500 to 2,200 – of Chinese labourers in the 1880s from disease, accident, violence, or crime in the construction of the BC section of the Canadian Pacific Railway, for instance, should have been included (see Roy, “A Choice between Evils”). Acknowledging their deaths would expose the building of the CPR to be one of the bloodiest of the development projects that imposed capitalist modernity on the country.

Similarly, no case encapsulates better the complicated social, political, and economic dilemmas of the peopling of Canada than the 1924 explosion on the Kettle Valley Railway in southeastern British Columbia, which took the lives of nine people, among them Doukhobor leader Peter Verigin. Dunkin’ Donuts appears in the text, but Doukhobors are absent.

But these are relatively minor objections. Death in the Peaceable Kingdom is a worthy contribution to the texts available to university instructors. The general reader, too, will find it an eye-opening way to rethink the history of Canada.

Daschuk, James. 2013. Clearing the Plains: Disease, Politics of Starvation, and the Loss of Aboriginal Life. Regina: University of Regina Press.

Roy, Patricia E.. 1984. “A Choice between Evils: The Chinese and the Construction of the Canadian Pacific Railway in British Columbia,” in Hugh A. Dempsey, The CPR West: The Iron Road and the Making of a Nation, Vancouver: Douglas & McIntyre.