Community Forestry in Canada: Lessons from Policy and Practice 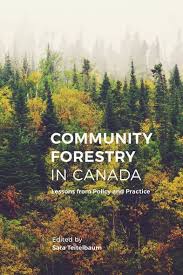 In Community Forestry in Canada, Sara Teitelbaum brings together a rich array of case studies –including four cases focused on British Columbia – that depict the remarkable variation in regional dynamics within community forestry politics and practice from coast to coast. This is the first anthology on the subject of community forestry to specifically examine the Canadian context. The incisive analyses by its twenty-five contributing authors are tied together through an overarching analytical framework that rests on four key principles that help to define community forestry: participatory governance, rights, local benefits, and ecological stewardship.

Taken together, the cases show how an increasing number of Canadian communities are enacting these principles to acquire “rights and responsibilities for specific public forest lands in their vicinity in order to achieve some collective benefit” (3). But uptake of community forestry practice has by no means been uniform across Canada. In some cases, groups have successfully taken advantage of windows of opportunity opened by shifting political and economic circumstances – such as the decline in the pulp and paper industry in Newfoundland (Kelly and Carson), or the mountain pine beetle epidemic in British Columbia (McIlveen and Rhodes) – while in other cases, specific geographical and political circumstances have limited their success (Leclerc and Chaisson; Beckley; Palmer, Smith and Shahi).

This volume provides insights into how policy and governance surrounding community forestry in Canada is being reshaped through strong public processes initiated by local residents and organizations (Leslie). In exploring how community forestry is emerging as a form of governance elsewhere, a reading of Community Forestry in Canada is enriched by Bullock and Hanna’s (2012) work: Community Forestry: Local Values, Conflict and Forest Governance. Bullock and Hanna inform us about key aspects of grassroots environmentalism as they play out in community forestry beyond Canada, in the US and Scandinavia. These works together help to contextualize community forestry within a global trend in devolution of control over forest resources to more decentralized and place-based actors. They lay essential groundwork for further study of the politics of community forestry in Canada, the kinds of benefits that are generated through community forests, and how these are distributed within communities. Both texts begin to grapple with the ways in which embedded assumptions about sovereignty and the state impact how relationships are negotiated between communities, individuals, and governments (Shaw, 2004). We learn from these case studies how forest management in Canada is increasingly dependent on the specific actors and communities that sustain it.

A common aspiration of the authors is implicit in this work: learning from past and current circumstances in order to cultivate and strengthen community forestry praxis in Canada into the future. The implementation of novel forest management agreements in British Columbia, in the Great Bear Rainforest (see Smith 2010; Price, Roburn, and McKinnon 2009; Armstrong 2009), new precedents set in Aboriginal case law (Tsilhqot’in Nation v. British Columbia, 2014), and the ongoing negotiation of modern treaties on the west coast, are all arguably shifting the way that governance and management of land and property are envisioned and will be carried out. How will these kinds of political-economic negotiations affect the ongoing development of community forestry in British Columbia, as well as in other parts of Canada? For people on the ground grappling with these questions, Teitelbaum’s compilation provides a vital starting point.