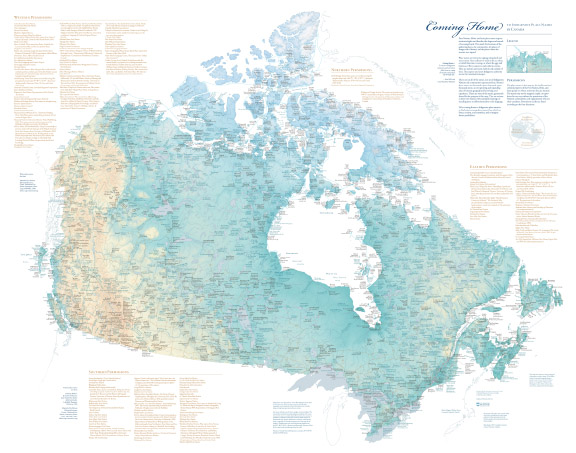 Coming Home to Indigenous Place Names in Canada is a fold-out display-ready wall map of Canada, hypsometrically tinted to highlight the physiographic landscape of the northern portion of North America, and labeled entirely and only in selected Indigenous place names as variously provided by First Nations, Bands and Tribal Organizations from across the country.  Terrestrial place names are applied in black type, marine or lacustrine or fluvial in blue, and all of them, numbering in the hundreds, in the orthography in modern use by the provider.  Many, especially in the northern and eastern portions of Canada, are super-scribed in their syllabic variants and all of them, terrestrial and not, subscribed with the approximate English translation.  Blue vectors along various shorelines delineate known Indigenous marine highways.  Measuring 42” by 32” it is a visually striking cartographic product.

Pearce notes in a short introduction how Indigenous toponyms are much more than geographical markers, variously ‘describing’ as they do, the appearances, shapes, effects, characters or cultural and material resource bases of the larger cultural landscapes in which they are embedded. Of great antiquity, Indigenous toponyms are directional aids, shorthand for the oral histories and the activities of ancestral agents in and by which they were constituted, landmarks both material and spiritual, and statements of ownership and use and occupation of traditional territories all at once.

The re-mapping of this country through an Indigenous lens by jettisoning the toponyms of familiarity to most Canadians, and replacing them with those of the original occupants of this land, Coming Home to Indigenous Place Names in Canada deserves to be mounted on the walls of as many schools, museums, cultural centers, and so on, and otherwise distributed as widely as possible.  It is an important contribution to the process of ‘making visible’ that which has been rendered ‘invisible’ to the majority of settler society for far too long, and so also to the decolonization of the Western geographical imagination in this country.

It should be acknowledged, of course, that this map, like all maps delineated in a two-dimensional register, is again evidence that Indigenous practices of resistance and recovery, by whatever means, inevitably run up against the reality that they must recycle and adapt to forms of representation that once served empire and colonization.  If informed only by the regional familiarity of this reviewer, the rationale for the selection of some toponyms, at the expense of others, is not clear.  Certainly, some of this is the consequence of the politics of land claims and the contestations they generate.  Likely also because of the loss of cultural knowledge over many generations, toponymic coverage is geographically uneven.  Pearce properly acknowledges how the toponyms on this map were and are the intellectual property of the First Nation, Métis or Inuit people on whose territories they appear, but the territories themselves are not shown on the map.  The restrictions of scale, along with the prior choice to privilege the thematization of the topographic base obviously placed restrictions on print display options.

This said, this reviewer could not help but think of the range of possibilities if this map was placed in a Geographic Information System such that the toponymic landscape could not only be sensually integrated into the wider ethnographic landscape, but selectively ‘scaled up’ to regional and/or local levels.  In short, why not be bold and envision it as but ‘one plate’ in an expanded and ever expanding ‘Indigenous Atlas of Canada.’?  Put alternately, Coming Home to Indigenous Place Names in Canada is a much needed contribution to the visualization of an alternative geography of this country specifically, but potentially helps establish the ground upon which truth and reconciliation may be realized more generally.