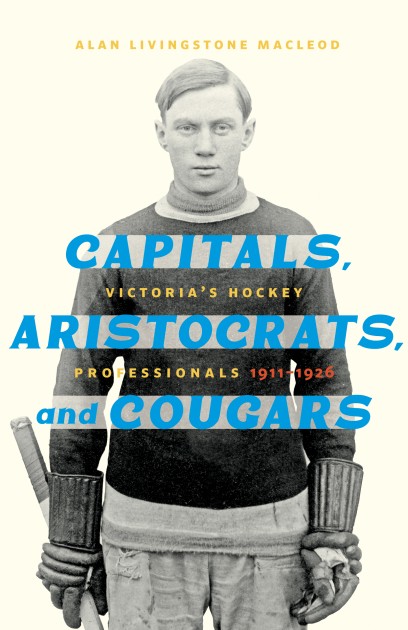 Historians generally agree that hockey originated in eastern parts of Canada and later spread westward. In large part, this western migration of the sport followed the pattern of demographic movements. It is then not surprising that there is an abundance of literature on hockey in Eastern and, especially, Central Canada, the latter of which boasts a long history of the organized game. Compared to this Eastern/Central Canadian focus, there is a dearth of literature on the sport’s development in the West. In this context, Alan Livingstone MacLeod’s Capitals, Aristocrats, and Cougars: Victoria’s Hockey Professionals, 1911-26 is a much welcome contribution to hockey’s history. The author divides his book into fifteen chapters, each covering a season of Victoria’s hockey team in the Pacific Coast Hockey Association, and a postscript. In the preface, MacLeod states that the book’s purpose is to examine “the cast of characters” assembled in making Victoria “a hockey mecca.” (2) In addition, he also wants to know “the context in which these players went about their business…the milieu – social, cultural, political – in which they played.” (2)

One only need go to the shelves of local bookstores to see that hockey is indeed Canada’s national winter sport. Much of this literature, however, is non-academic in nature and most, if not all, focus on the who’s, when’s, and what’s of the game. Seldom does one find a non-academic hockey history asking the why’s and how’s. In this sense, MacLeod’s first goal for Capitals, Aristocrats, and Cougars aligns pretty much with the rest of what has been on the bookshelves. Unlike many hockey books, MacLeod does not focus only on the famous players but the lesser known as well, thus rescuing them from historical oblivion.

While MacLeod sets out to provide context for each of the team’s seasons, there is little analysis of how events outside hockey influenced or were influenced by Victoria’s squad. An exception is the discussion in chapter six of the impact of Canada’s entry into the First World War on the team and its personnel. Much of the rest of the discussion of the social, cultural, and political developments of the time appears to be based on a random selection of headlines and entertainment news items. Chapter three provides an example. It starts with a discussion of BC’s and Canadian’s anti-Asian political campaigns, but goes no further than making clear that there was a deep anti-Asian sentiment within the province and across the country. Readers are left to wonder how this racist movement affected the Victoria squad. Did it or did it not? Why or why not?

In part, the lack of contextual analysis can be traced back to the sources MacLeod employs. The author’s major primary sources are local newspapers, particularly the Victoria Daily Colonist. He also consulted Library and Archives of Canada to locate information on those players who served in the First World War. As for secondary sources, MacLeod provides a list in the Sources chapter at the end of the book. All are non-academic hockey history books, and none consider any national, provincial, and/or local political, cultural, and/or social developments of the times. The chapters thus resemble a random selection of news items with a focus on hockey. One does not get a sense of how events are related, besides through the games covered by the newspapers. As with most popular history books, there are no citations within the text, although at times MacLeod does tell readers that a certain item was on such and such page of a newspaper.

All in all, Capitals, Aristocrats, and Cougars delivers what one expects from a non-academic history book. For those who are interested in the players of the team, they will not be disappointed. As a team that actually won a Stanley Cup while playing in a city that had the second lowest population of all winners of the trophy, it is about time someone looked into its history.