Canadian Counterculture and the Environment 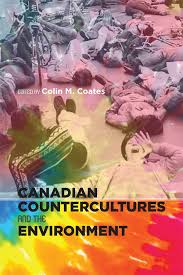 Contemporary environmental debate owes a lot to the counterculture movements of the 1960s, 1970s, and 1980s. This is one of the main contentions of Canadian Countercultures and the Environment, the fourth book published under the University of Calgary’s Canadian History and Environment series. Edited by Colin M. Coates, the collection of essays in this volume explores the environmental politics of the Canadian counterculture of the 1970s and 1980s. It examines the successes and failures of various grass-roots efforts to contest mainstream culture and foster new ways of practising environmental politics. While the Canadian counterculture was certainly not the only force shaping environmentalism in the late twentieth century, the collection argues that many of the fundamental issues within contemporary environmental debate — such as urban transportation and bicycling, recycling, and renewable energy — were first popularized within  the countercultural movement.

And yet, as Canadian Countercultures and the Environment makes clear, the Canadian counterculture was never a coherent or cohesive movement. Although united by a common concern for the environment and a desire to live outside the norms of mainstream society, the counterculture encompassed an amorphous and diverse set of lifestyles, practices, and approaches to environmental politics. While Coates establishes the broader historical context of the Canadian counterculture in his introductory chapter, the particularities of these diverse practices are examined in the collection’s ten substantive chapters. Grounded in richly detailed local case studies, these chapters are organized into two broad sections: environmental activism and counterculture lifestyles. While at times this division can seem somewhat arbitrary, these broad sections do help to structure the disparate themes and issues covered in the collection.

Section 1 focuses on environmental activism and emergent forms of political praxis within the counterculture movements of the 1970s and 1980s. Including case studies from British Columbia, Montreal, and Toronto, the chapters in this section showcase the broad range of the counterculture’s political and environmental goals and the tactics adopted to achieve them. Highlighting the international nature of the Canadian counterculture as well as its complicated relationship with the state and local communities, these chapters tease out the tensions, conflicts, and coalitions that emerged through the counterculture’s environmental activism. Of particular note in this regard are Ryan O’Connor’s chapter on the history of Toronto’s Blue Box recycling system and Nancy Janovicek’s study of a community-based environmental research project in the Slocan Valley of British Columbia. In detailing the countercultural origins of Toronto’s Blue Boxes, O’Connor’s contribution highlights the important role that state funding played in the project and traces the unexpected connections between the city’s counterculture and business. Janovicek’s examination of the 1970s Slocan Valley Community Forest Management Project draws attention to the importance of coalitions formed between older settler communities in the Kootenay region and the more recently arrived “back-to-the-landers.” In doing so Janovicek provides an insightful corrective to common narratives of environmental politics that pit workers against environmentalists.

Section 2 is titled “People, Nature, Activities.” Organized around countercultural “lifestyle choices” and the environmental politics and perspectives upon which they were based, the chapters in this section form a somewhat less cohesive whole than those in Section 1. The counterculture’s complex links with the state and with local communities do, however, feature prominently in most of the essays. Both Henry Trim’s account of the New Alchemy Institute’s Ark bioshelter project in Prince Edward Island and Matt Caver’s discussion of “back-to-the-land” groups along the Sunshine Coast in British Columbia shed light on the importance of state funding in sustaining countercultural projects and the divisive local politics that such support could engender. In one of the collection’s strongest chapters, David Neufeld reflects on the complex relations between Indigenous communities in Dawson City, Yukon, and counterculture youth newly arrived in the area, highlighting instances of both tension and collaboration. Section 2, and the volume as a whole, is rounded off by two chapters that draw out more personal reflections on life in the Canadian counterculture. In the only sustained discussion of counterculture gender politics, Megan J. Davies uses interviews with midwives and mothers to trace the history of counterculture homebirth in the Kootenay region in the 1970s. Alan MacEachern and Ryan O’Connor ground their chapter on childhood experiences of the counterculture in oral interviews with people who grew up in “back-to-the-land” communities in Prince Edward Island.